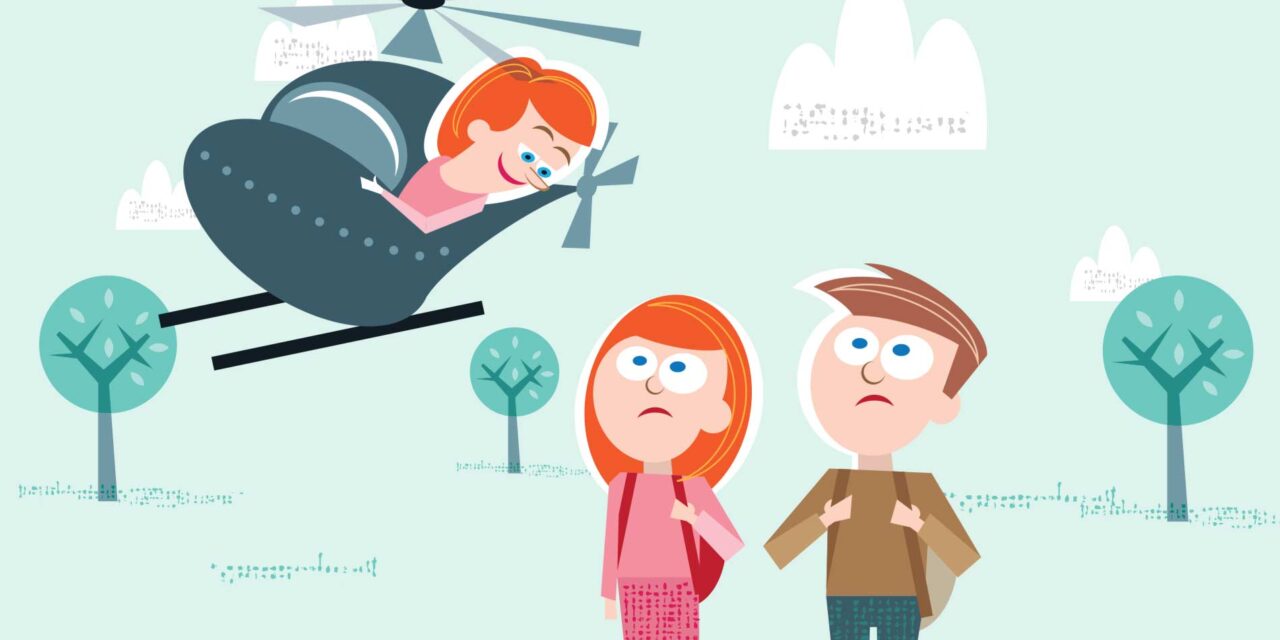 The Unintended Consequence of Helicopter Parenting

Tips for Hands Off Supportive Parenting

A recent study by Florida State University researchers concluded that “helicopter parenting” behaviors may negatively impact college students, specifically regarding the development of self control skills as well as the students’ feelings of burnout when it pertains to academics.

In actuality, over-parenting or coddling occurs long before college, when parents do for their children instead of allowing them to attempt actions themselves. It occurs from a young age with such tasks as tying shoes or pouring a drink, and continues as children develop physically and socially. Helicoptering occurs in children’s relationships, in their academic lives and on the sports field. Parents contact teachers to challenge grades, walk onto sports practice to get their children more playing time, or even do their homework or projects for them.

“I think some parents wouldn’t even consider themselves a helicopter parent, and think that they are [OK to be] in their children’s stuff. You think you’re doing the best for your kid, when in reality you’re probably doing more damage for him if you’re that type of helicopter parent,” noted Kim Palumbo, whose children, Lorenzo and Kallie, graduated from Francis Scott Key High School in Union Bridge in 2019 and 2021, respectively.

“It’s a lack of hitting the pause button,” said Cathlin McCormick, counselor at East Middle School, in Westminster. “Sometimes it’s just unhealthy barriers and boundaries set up that are so overprotective. It’s this insulating wall around the student where it’s always finger-pointing to everyone else.”

Helicopter parenting is perhaps as old as parenting itself, but its current form can be traced to the last century, when people who had grown up during World War II and the Great Depression became parents and were determined to help their kids avoid the hardships they endured, according to Allison McQuaid, a licensed clinical professional counselor and clinical director of Anchor Counseling Centers in Eldersburg. “It’s wanting your child’s future to obviously be better than your own childhood,” she explained. “It comes from a very good place of love and caring.”

Cindy Hess, counselor at Taneytown Elementary School, sees parents exhibit coddling behavior because they “think it’s the right thing to do. … Most of the time, they think they’re doing the right thing and they have their kid’s best interest at heart.”

These parental behaviors can begin during the toddler years with simple reactions like rushing to a child who fell on the playground before he can pick himself up and dust off on his own. It continues in the school years with parents emailing teachers about a poor grade and helping the child redo the assignment. McQuaid calls the over-protective, over-parenting phenomena “over-functioning” for their children, and it results in comparisons to other children because parents need or want validation.

“We’re involved in this hyper-competitive society now, where if you’re not the best in everything then you’re nothing,” said Lacey Headley, school counselor at Francis Scott Key High School.

The societal pressure to be the absolute best is an unrealistic one, Headley said. Social media posts from other parents praising their children for excelling in school and enrolling in the highest classes or making sports teams and being the team MVP can exacerbate feelings of guilt and failure for parents if their children don’t accomplish equal or greater success. It can start when children are very young and can continue through high school as they contemplate their next steps, whether college, technical school, the military or employment.

“As a parent, your insecurity is what drives the helicopter behavior,” Headley said. “If my kid doesn’t get to Yale or Harvard, then I failed as a parent, or if my kid’s not top in his reading group, then I’m not doing my job as a parent.”

A recent college admissions scandal, in which wealthy parents were caught buying their children’s admissions into prestigious colleges, is another demonstration of this behavior.

“Even people that you think have everything, they thought they were trying to help their kids,” said Hess. “It cost them tons of money. It cost them jail time, their reputation, it cost their kids’ reputation. It’s really a big deal.”

Headley hears from parents who are frustrated that their children will not research colleges on their own, are lazy, or even struggle to choose their classes for senior year. The problem is that the parents have stepped in and handled things for their kids throughout their lives, and the children haven’t made important decisions on their own.

“They want what’s best for their kids. Their intentions are all in great places. But what they’re doing is they’re robbing their kid of an opportunity to figure it out for themselves. And so they’re actually handicapping their kid more than they are helping them. The kid goes to college, and you’re not there to ask a professor a clarifying question or go to meet with the professor during office hours,” Headley said.

Hess agrees. “What I find is those are some of the most insecure parents, because they’re afraid that if they don’t do [schoolwork] for their kid that their kid is going to fail at something. And the best thing that their kid could do is struggle.”

The discomfort of these situations provides a key life lesson for the students. They learn to advocate for themselves, an important skill that applies to situations in college, in the workplace or even in a social setting. Headley often receives emails from parents asking her to contact a teacher on their child’s behalf, when the child sees the teacher daily in class.

When parents are over-involved, it sends a message that they don’t trust their children to do things themselves, Headley adds. This affects the children’s ability to problem-solve and may cause them to shut down and just let the parents take over, no matter what their age.

Hess, who finished her 21st year at Taneytown in June, sees parents facing anxiety about their children failing, and they choose to make life easier and create a smooth path to success. They feel pressured by family members, the community, and society for their children to achieve.

According to Hess, with virtual schooling during the pandemic, it was easy for parents to be over-involved. They made sure their children logged on for school, and remained by their side throughout the day and actually completed some of their children’s schoolwork.

When Miki Fitzgerald considers parenting styles, she describes those who hover over their kids, trying to do too much for them; those who are hands-off and let their children suffer the consequences of their actions or inactions without parental involvement; and those who fall somewhere in the middle. Fitzgerald describes herself in the latter category.

“I tried to be in the middle there to guide them, offer guidance, and be there when they need us,” she said. She checked grades online for her first child, Kenzie, and with the second, Connor, she reminded him to log in and take more ownership. “I’ll be there if you need me, ask questions if you don’t understand or want my guidance. But you’ve got to do this on your own.”

Not letting children struggle at a young age, which proves just as difficult for some parents to endure, can present serious consequences when they’re older and actually do make mistakes and fail. Bringing them to school when they’re upset or crying, having them stay inside for recess, or letting them fail an assignment will help them in the long run, as will letting them solve their arguments or conflicts with other children. Instead, some parents tell their children to avoid the other student without allowing them to work through the issues.

“Lots of times, the child is ready to move on or deal with it. Kids can be pretty resilient,” Hess said. “Typically both parties have some kind of involvement.”

Handling issues in this manner, and doing a child’s homework, answering questions for them, trying to tell the teachers how to teach and coaches how to coach can elicit a variety of feelings and behaviors. Children feel disappointed, a lack of self-confidence, anger, irritability and even anxiety, McQuaid said.

“They begin worrying about what’s going to happen here or am I going to be found out? And they’re trying to please parents and also please school, but then also the anxiety is ‘What if I’m not capable? What if I can’t do it? My parents don’t think I can,’” said Hess.

According to McCormick, more students are exhibiting anxiety than in the past. The pandemic isn’t all to blame; it’s more about the stress and pressures they are under to achieve in class, at home and in the community. The anxiety can contribute to falling grades, minimal motivation and a lack of resiliency.

“We aren’t equipping our children to handle the challenges that life is going to throw them,” said McCormick. “We can delay and maybe ward off some of the bad experiences or negative feelings that a child may experience in life, but we can’t prevent them 100 percent all the time throughout their life.”