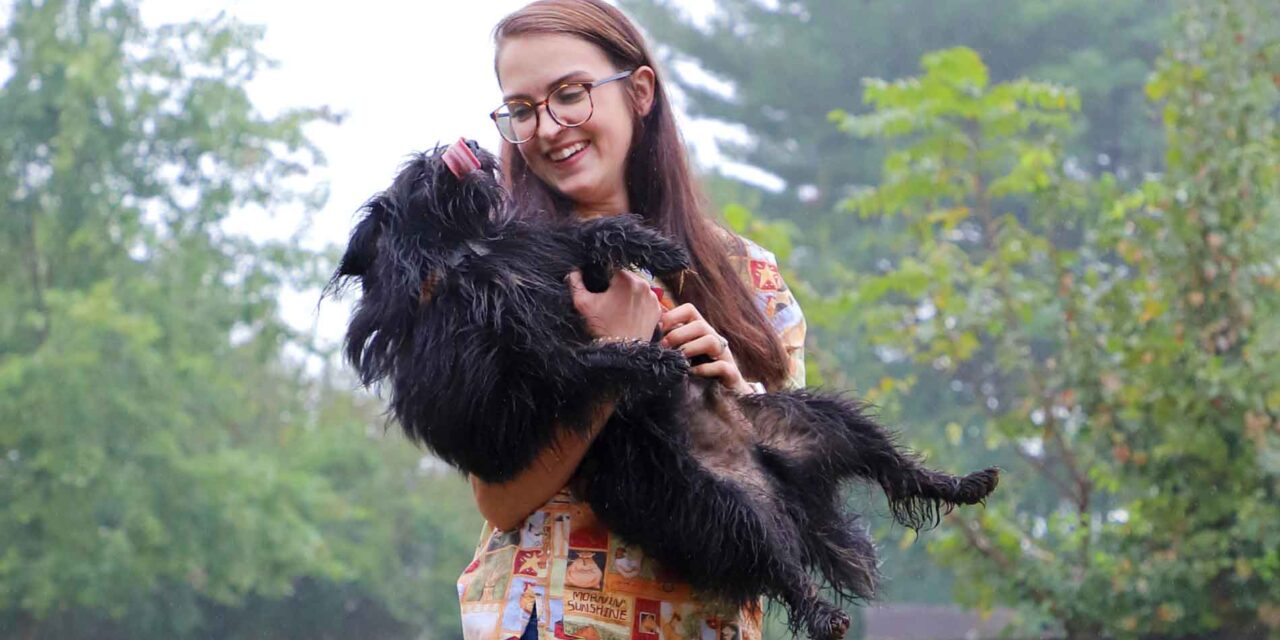 On a recent sunny day, my neighbor and I are in our respective yards being grandmothers. We echo each other’s comments — “Don’t put that in your mouth!” Stay in the yard!” As we do so, we nod to each other and smile in silent camaraderie.

I have a granddog by way of my son and his girlfriend, and I have the coffee mug and bumper sticker to prove it. Both say “I love my granddog.”

And, apparently, I am not alone. 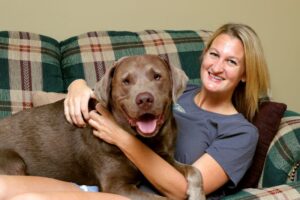 Tracy Manley with her dog Brookse. Brookse gets a birthday party complete with gifts, a homemade cake and a rendition of “Happy Birthday.”

In fact, 67 percent of American homes include a pet, according to the American Pet Products Association (APPA). And these pets are living quite well. Gone are the days of leaving Fido in the back yard to chase squirrels. Today’s pets have moved inside and become a real part of the family. And it even shows in our language: What once were “pet owners” are now often “pet parents.”

And life has especially gone to the dogs. In addition to Halloween costumes (which are also available for cats, guinea pigs and even lizards), people can purchase clothing for their pups from parkas to hoodies, to sweater and skirts sets, to backpacks and jewelry. Dogs go to the spa, where they can have their nails painted and receive facials. They also have their own parks and attend daycare.

Further cementing their increasingly exalted place in people’s lives, pets have become media darlings — from commercials that focus on pets selling non-pet products to social media with its endless videos of cute kittens and comical canines.

Today’s society is eagerly embracing all things fur, feather and scales and all that goes along with it. In fact, pet owners in the United States spent nearly $99 billion last year on their animal companions, according to the APPA. 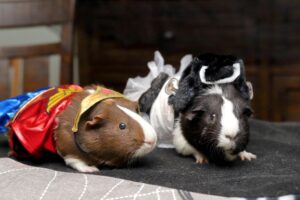 Erica Pickard also has two guinea pigs, Peanut Butter and Spotty Cakes. They have a decorated habitat and receive a Guinea Pig Box monthly with treats and other goodies.

Brookse, who lives with his owners in Westminster, each year gets a birthday party complete with gifts, a homemade cake and a rendition of “Happy Birthday.” “My boyfriend thinks I love the dog more than him,” says Tracy Manley with a chuckle.

Erica Pickard’s guinea pigs, Peanut Butter and Spotty Cakes, have their habitat decorated with Christmas lights and receive their own Guinea Pig Box monthly, with treats and other goodies. “They are my grandpiggies,” says Pickard, of Westminster, who inherited the two guinea pigs from her daughter. She also has a cat named Crush who has his own Facebook page, “Crushtopher.” (“Just for fun,” she says.)

When Sonya McClung and her husband, who live in Westminster, go out to dinner they order takeout for their dog, Molly Mcfluffinmuffin, from the child’s menu. In fact, waiters know to ask as they finish their meal, “Do you want to order for the dog now?” 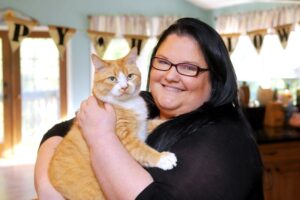 Erica Pickard with her cat, Crush. He has his own Facebook page, “Crushtopher.”

Sandy Weber’s four dogs, Manfred, Eddie, Wilson and Sherman, receive regular packages from their Gram in Florida for birthdays and holidays. “I just have to say the words present and Gram, and they can get excited,” says Weber, who also lives in Westminster.

And Katie Marinello of Westminster doesn’t leave her cat, Peach, behind when she travels. “I take her on vacation with me,” Marinello says. “I took her to New York for two weeks.”

Society is going through a pet evolution or, as Mark Cushing, founder of the Animal Policy Group, likes to say, a revolution. It’s “the first revolution in history in which the oppressors voluntarily stepped aside for the oppressed,” he says.

According to Cushing, the author of Pet Nation: The Inside Story of How Companion Animals are Transforming Our Homes, Culture and Economy, humans are coming to understand and appreciate that pets are good for them. 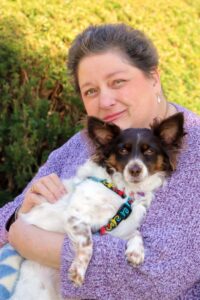 Kim Carl with her rescue dog, Molly. Their close relationship proves that the bond between human and pet can be strong.

“We’ve discovered that the proven path to wellness and building social capital is through the human-animal bond, ” says Cushing.

And there is science to back it up, he says.

“Studies have found that when we engage with pets our oxytocin levels go up and our cortisol levels go down, and that reduces stress and anxiety, which improves mental health,” he says.

The feel-good hormone oxytocin is the same hormone that’s released when mothers bond with their babies.

A study in 2015 found that pet owners were 60 percent more likely than those without pets to meet new people in their communities. More specifically, those who walked their dogs were more likely to have befriended someone they met through pet-related connections.

And when there is no in-person interaction readily available and people feel isolated — as during the COVID-19 pandemic — pets can be beneficial companions. In fact, pet adoptions soared last year. According to the SPCA, one in five American households acquired a dog or cat during the pandemic.

“People were seeking out companionship,” says Ericka Friedmann, a professor and associate dean for research at the University of Maryland School of Nursing, whose research includes the study of animal-human interaction. “We are social animals.”

Social animals who can benefit from interacting with other animals and not just the human variety. And sometimes in very direct and unexpected ways.

Kim Carl of Taneytown, for instance, is a diabetic. In a classic example of “who rescued who?” her rescue dog, Molly, is her “nurse and babysitter,” says Carl. 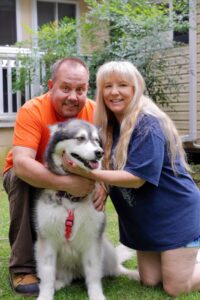 Sonya McClung and her husband spoil their dog, Molly Mcfluffinmuffin.

“When Molly was about 4 to 5 months old,” Carl says, “she began acquainting herself with my regimen for my Type 2 diabetes. She quickly developed her own habit of licking the back of my hand to signal me to check my glucose levels. Molly would sit anxiously while I tested, always getting a high reading, and I would need to counterbalance with an insulin injection.”

As proven by Carl and her Molly, the bond between human and pet can be strong.

And as people have become attached to their pets and incorporated them into their homes and lives, the care they give their pets has changed as well. Many hire dog walkers or pet sitters when they are away from home. And they expect top-notch care for their fur babies, says Becky Martin, owner of Becky’s Buddies Pet Services in Sykesville.

“A few insist on putting raincoats on their dogs if I walk them in the rain,” says Martin. “I have also walked cats in strollers on a nice day.”

Martin spoils her own pets. Her dog has six beds in the house — “including mine,” she says. “He eats better than I do with all organic food and treats,” she adds.

For those who want social stimulation for their dogs there is doggie daycare with its structured schedule of play times and naps. According to Jen Norris, a co-manager at We’ve Gone to the Dogs in Westminster, many of the dogs who come to doggie daycare “have a lot of energy,” she says. “The parents unfortunately just don’t have the resources to get that energy out.” 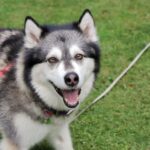 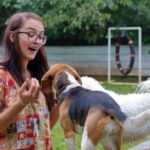 Jen Norris with We’ve Gone to the Dogs spends time outside with a few of her clients. 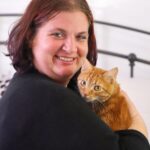 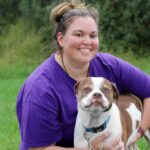 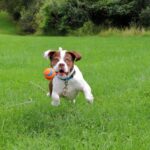 Bentley has fun during a playdate.

Not a problem at We’ve Gone to the Dogs, which promises a pooped-out pup at the end of the day from fun activities and making friends. Yes, making friends.

“They have their doggy best friends,’ says Norris “These little cliques. It’s cute to watch the relationships develop.”

Besides dog walkers and pet sitters and doggie daycare, today’s pets receive special care in other ways. Inez Donmoyer, of Unicorn Dreams Wholistic Touch in Westminster, offers massages, reiki and even aroma therapy to treat a variety of pet ailments.

The health and well-being of pets is now an important part of pet ownership, whether it be holistic or traditional. And it is being driven by millennials and Generation Z, says Cushing. “They want human-quality health care and are willing to pay for it,” he says, including specialty care such as chemotherapy for a pet diagnosed with cancer. Many pet owners have pet insurance for this very reason.

But despite top-notch care, pets do not live forever. And the stronger the bond the harder the goodbye and the more it means. That, too, has changed in recent years.

“Pets are now part of the family,” says Jennifer Fry, owner of Faithful Memories Pet Cremation in Mt. Airy, “and when it comes time for them to leave us that leaves a real empty space in our lives. You want to do something special for them that recognizes that fact.”

Many do. “I know a couple who have had several dachshunds,” says Fry, “and they have a whole shelving area that the husband built that has all of the memorial items — the urns, different photos. Those dachshunds were like their children.”

Children who are certainly remembered with great love and gratitude.