Photo Frenzy: Why Everyone Should Have a Picture Perfect Plan for their Photos 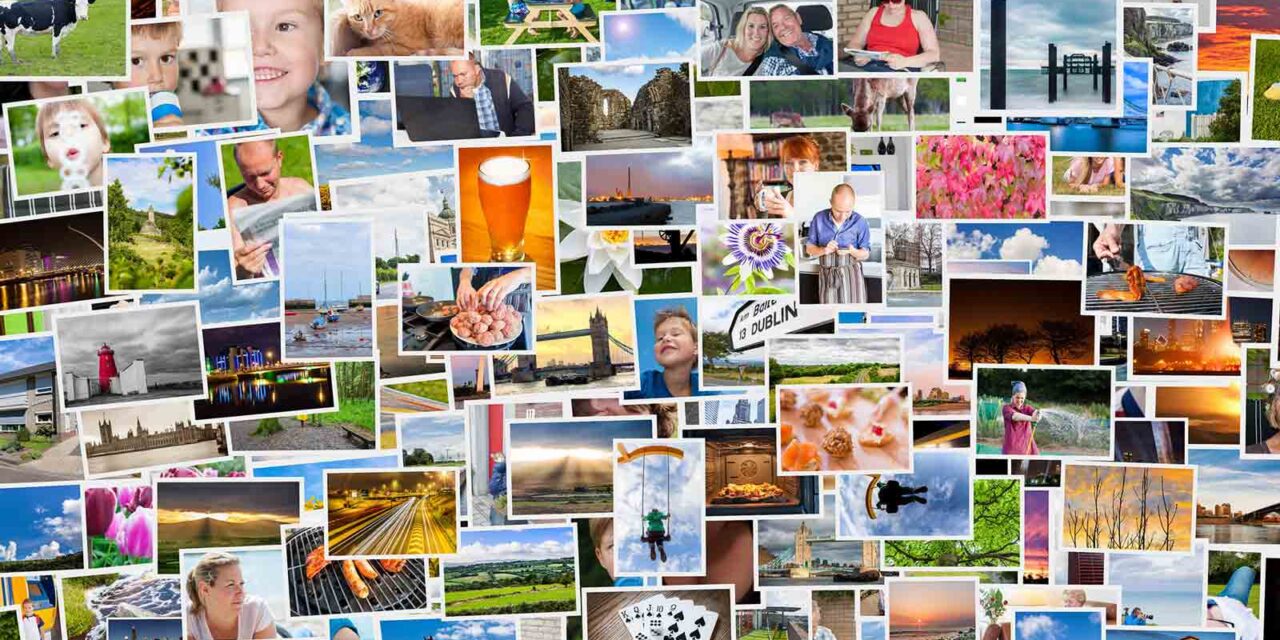 If you’re like me, you carry your cellphone with you, snapping photos of family members (including my dog) with funny expressions, at milestones in their lives and on vacation.

It’s so easy to shoot digital photos, and without the need to pay for processing, there’s no limit. But the problem for me, like many others, is what to do with the thousands of pictures captured. When my son was born, we were still processing film, and we have photo albums in the closet documenting his birth and early years. I similarly documented his sister’s first three years and created several albums of those times. But once we converted to digital photography, things changed.

Gone are the photo albums that provide glimpses into those precious times. Photos were saved on computer hard drives and back-up drives. We learned the hard way that technology doesn’t last forever; as drives became corrupt, we lost years of photos of my son playing sports and my daughter’s dance recitals.

Twenty years later, I regret that we’re missing those precious photos, and I’m now committing to preserving our family memories in ways we can easily see them. Having tangible photo memories always required commitment — it used to be in buying film, taking the pictures, getting the film developed and making the book. Today the commitment comes after taking the pictures. It means having a plan for storing the keepers and deciding and following through on how to share them— on social media, by printing a book, making a calendar, ordering prints, or any of the other dozens of options.

Manchester resident Teresa Fenters created her first photo albums in middle school, after receiving a camera as a gift. She, too, recalls anxiously awaiting the development of her film, and she arranged the prints in albums in chronological order.

Fenters, like the rest of the world, faced a turning point in the 1990s, when digital photography phased out the need for developing film. Photos were snapped and viewed, edited, printed and stored within minutes. Fenters, however, committed to continuing to print photos and arrange them in albums with the ability to look page by page. She tried printing photos at home, describing the effort as a “disaster.” That’s when she turned to local stores like CVS and Walmart, and again arranged the prints by date in albums. More than five years ago, she joined digital photo service Snapfish by downloading the application to her computer and saving her photos through it. She took advantage of special offers, like one-cent prints, and got what she needed for her albums.

Each time a new digital camera was released, Fenters upgraded. Her last camera purchase was in 2016, and she says she used it twice before selling it in February 2020. The reason? Her cellphone, which was easy to use and produced quality photos. A “no-brainer,” she says.

“It’s just so easy. My husband says, ‘Your camera comes with a phone,’” she acknowledges with a laugh.

As Fenters glances around her home office, her eyes land on a bookshelf containing many of the nearly 200 photo albums she’s created. They date back to 1978, and most years are chronicled in two albums of about 400 photos each.

“I’m just trying to capture the moment,” she says.

The bookshelf also stores the photo calendars she’s printed and embellished by hand each of the last 10 years. She also puts those photos in albums.

Fenters also has photos stored on CDs and hard drives as backups, but today primarily uses Snapfish for unlimited photo storage, provided as long as she continues printing photos through the service. She also takes advantage of the 100 free monthly prints (she pays just for shipping). She estimates that she prints about 800 photos each year in addition to those she uses for the next year’s photo calendars.

“I don’t know anyone who has them in albums like this,” she says of the books labeled by year. Some of her friends have their photos in photo boxes, but Fenters prefers the chronological organization and immediate accessibility the albums provide.

When a family member refers to an event long ago or mentions someone resembling an older relative, Fenters knows just where to look.

Joanne Caruso, too, has old photo albums in her Eldersburg home.

“Pictures are really important to me,” she says. “I was kind of obsessed about it when the kids were younger (now they are 24 and 29).”

When she used film cameras, she picked up the prints and negatives, and stored them in her safe deposit box at the bank. Over time, she says, stores like Walmart and Walgreens started offering CDs, so she has plenty of them as well. Caruso also created family albums, with about 30 dating back to 1990, stored in plastic bins in case of flooding.

Caruso no longer uses a digital camera, relying instead on her iPhone11. On a day in April, she noticed 6,370 photos in her phone, mostly of her two dogs. She organizes photos into albums on her phone, backs them up on her computer, and uses Groovebook for storage. Each month the app allows Caruso to choose 100 prints and arranges them in a photo book sent to her home. She chooses a mix of photos from long ago to current milestones, and suspends the account if she doesn’t feel she has 100 to select that month. In total, she has 20 Groovebooks and 23 Shutterfly and Snapfish books created based on events like trips, holidays and other milestones.

Jenn Tillman, too, has thousands of photos, many of which are scattered around her Eldersburg home in photo albums and frames. She, too, takes advantage of a digital photo service, choosing Shutterfly’s unlimited printing offer. “I love looking up and seeing them,” she says. “Every single surface is covered with photos of the entire family.”

Tillman’s photos reside mostly on her phone and she’s adamant about saving them multiple ways so they are not lost. She stores photos on flash drives and utilizes the cloud via the Google Photos application, which provides automatic storage of each photo she shoots from her phone (beginning June 1, 2021, the service will no longer be provided free of charge — see sidebar). She also posts her favorite pictures on Facebook to provide “less cluttered highlights of life” and prints photo albums of trips and yearly calendars.

“I [also] print them out in case one day the cloud goes up in flames,” she says.

Christine Courtney similarly prints photo books, primarily using Snapfish, which she used to produce her wedding album 11 years ago. The application helps her chronicle milestones and events. She estimates she takes about 2,000 photos every year.

In the days of film, Courtney stored the negatives in the family’s safe. Four years ago, she invested in unlimited Amazon storage, with an annual fee, and that automatically saves the photos she takes on her phone. This enables her to delete photos from the phone, saving phone memory, knowing they are saved on the cloud. She estimates there are 60,000 photos in her Amazon account. Her go-to for albums, she says, continues to be Snapfish, and she starts looking around for deals in August. Usually on Black Friday, she gets the album for 70% off, netting a reduction of about $150.

“I make the albums throughout the year as I go,” she says. “I make them as a Christmas present to myself every year.”

Deven Pirro credits the COVID pandemic for inspiring her to physically document family milestones. Her photos were previously stored on her phone and in her computer, but she had her second son and realized she needed physical albums beyond the photo calendars she created each year. She bought albums and printed photos at Walgreens.

“I reverted back to old school,” she says. “It’s a great way to look through photos.”

With about 5,000 photos and videos on her phone, she added data to her phone plan and started backing up to Apple’s iCloud.

“My game plan is to continue making annual albums,” she says. 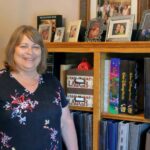 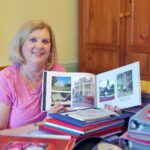 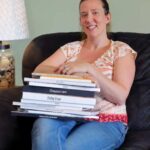 Christine Courtney stores her photos with Amazon automatically and makes albums throughout the year with Snapfish. 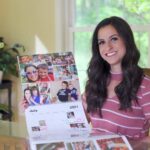 Make Your Own Albums and Prints

Gone are the days of waiting weeks and months for photo developing and custom-produced photo albums. Today, everyone can custom design their own photo books and choose the prints they want made. Here’s a look at some popular offerings from online and local sources with pricing information.*

$3.99 per month – select 40-100 photos from the phone and receive a 4×6 photo book each month. Shipping is free. Affiliated with Shutterfly.

Photo books available in 8×8 square up to 11×14 landscape size. Covers range from softcover to premium “layflat” hardcover. Prices range from $19.99 – $109.99 based on size and cover. Regularly runs discounts. In April, specials included 75% off all photo books and free shipping for orders over $29.

Photo services like Snapfish and Shutterfly provide photo storage as long as regular printing is utilized. Storage services provide significant space in the cloud and some choose to pay for space and save photos and backup computer files simultaneously.

* Information collected from company websites mid-April 2021. All plans include stipulations that differ by provider.