Rising to the Call 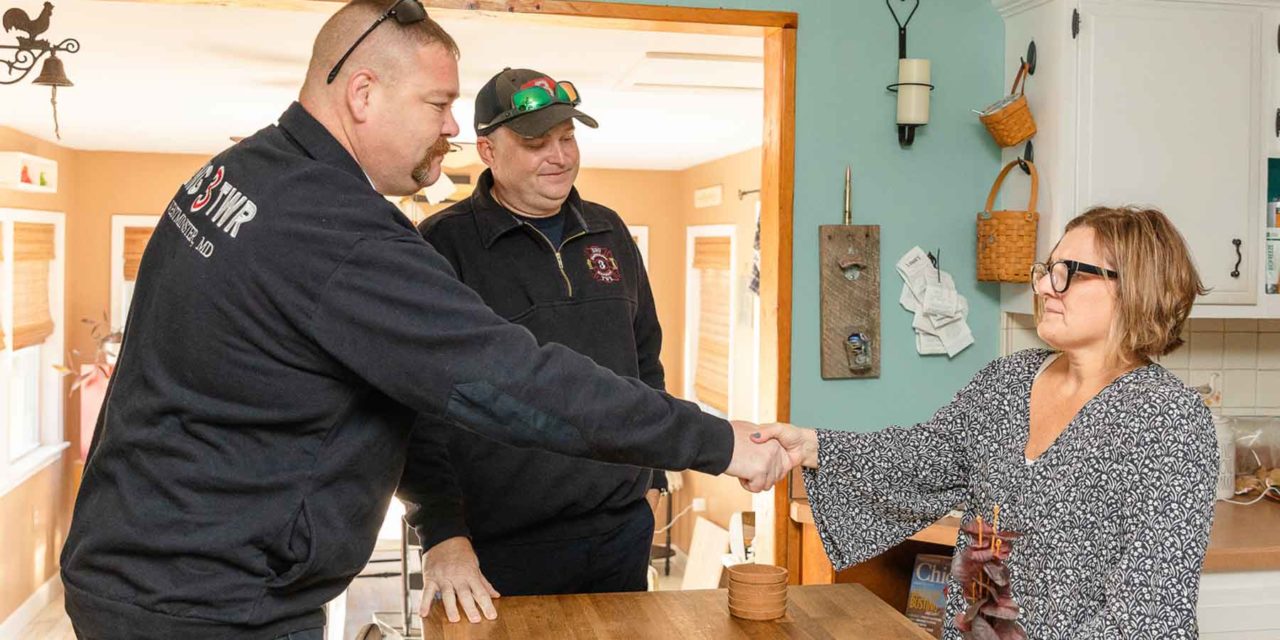 After she survived a head on collision in Westminster on December 28, 2016, Jackie Dintino considers the first responders in Carroll County, “angels who swoop in with calming voices when fear and chaos are at their height.”

When Robyn Allers woke at 4:30 a.m. on August 7, 2017 to find her husband, McDaniel College President Roger Casey, seizing and unresponsive, she experienced the responders’ “grace under pressure.” County dispatcher Bridget Weishaar guided Allers through the CPR counts until a team of six responders, led by Westminster Fire Department paramedics Max Nickey and Steve Caho, arrived and brought her husband’s heartbeat back.

Dr. Sheryl Seibel, like Casey, doesn’t remember anything about her “event,” which is the term first responders use for more serious calls.

It happened on July 12, 2018. Seibel, a veterinarian, collapsed on the floor of the mobile vet van during a call to Marsden Road in New Windsor. She has no recollection of her colleague, Danette Comer, pulling her from the van and, with her newly minted CPR certification, starting the consistent one-two-three-four-five count until the first responders arrived.

Comer likely kept her alive in those first minutes, and Seibel also remains keenly aware that first responders “were the crucial liaisons before the hospital. They made all the difference in whether I lived or died.”

Seibel, Casey and Dintino are three of the lucky ones who survived.

National statistics confirm that only 1 percent to 2 percent of people who suffer cardiac arrest outside a hospital survive, Nickey said.

Casey’s rescue was one of the most smooth and ideal responses, Nickey added, crediting the responding team’s training, experience and tiny details that went just right.

On the Other End of the Line

First Responders, dispatchers and people who have called 911 for their loved ones share the following pieces of advice:

Put high-contrast numbers on the mailbox. Have a list of medications ready. Have a small card in your wallet that gives information about allergies, medications, known medical conditions. Cellphones can store information and there is ICE (in case of an emergency), but when there is a wreck, the phone is one of the first things to fly out the window. — Mike Karolenko

It will feel like you have been on the phone for 10 minutes, but it is probably two. Trust that responders will be there soon. Know that dispatchers have questions they have to ask. The ambulance is dispatched right away, but as we get answers to questions, we can know if the situation is changing and more help needs to come. — Bridget Weishaar

Caho and Nickey were already at the firehouse. Minutes saved. They were at the end of a 24- hour shift, but the night had been slow, so they felt rested.

Andrew Zimmerman, the college’s campus safety officer who was also at the end of a 24-hour shift, arrived with keys to Casey’s house just as responders pulled up. He helped them haul equipment upstairs to the second floor. Minutes saved.

The responders had a LUCAS device, a backpack-sized machine that administers perfectly timed heart compressions. They strapped the LUCAS across Casey’s chest and pressed the button. Minutes — and manpower — saved.

“We talk about nominating LUCAS for Firefighter of the Year,” joked Mike Karolenko, a fire and EMS professional in Westminster.

The short distance from the Westminster fire station to the president’s residence on the McDaniel campus and then to the hospital saved time, as did the responders’ ability to send information directly to the hospital electronically from the ambulance.

He pieces together what happened that morning by listening to details from others.

“I remember nothing; in fact, I had 10 days of amnesia,” he said. “When I woke in the hospital, I kept asking, ‘What happened?’”

“He asked that about every 30 seconds,” Allers added.

Casey still has the notes that Allers placed on his phone for him: “I’m in the hospital. I had cardiac arrest. I’m ok.”

Seibel also has to piece together what happened from what others say.

“I hear that I was very combative, that at one point I woke up and declared I was fine, and I wanted to go back to work,” Seibel said. “Oh, I was not a pleasant patient.”

An inability to remember is common — and probably a good thing, Nickey said. “It’s your body’s way of protecting you. Rescues are not pretty.”

Dintino, a former trauma nurse who now works at the Carroll County Eye Surgery Center, said she remembers the whole scene and it was far from pretty.

“I remember being hit, how things were eerily quiet,” she said. “And the smells, mostly burning smells.”

She remembers screaming. “But it didn’t feel like me screaming,” she said. “I was hysterical, and I couldn’t breathe, but the first responders were so calming.”

As a nurse, she inventoried her injuries for the paramedics, assuming they were listening. “My pelvis is shattered, my left arm is broken, and my lung might have collapsed,” she remembers saying.

She remembers being covered with a tarp so she could be cut out of the car, and then being flown to Maryland Shock Trauma Center in Baltimore, where drugs administered through an IV eased her to sleep.

“It is terrifying to put yourself in others’ hands, especially for me because I was used to being the hands that comforted during trauma,” Dintino said. “But you have to; you don’t have a choice.”

“It’s hard to be here because your rescue is linked to so many people and people who were more directly involved than us,” said first responder Joshua Gursky when he met Dintino in October – the first time since the wreck. “And we don’t want to steal other responders’ glory.”

“It’s also hard because our job involves your pain and other people’s pain,” added Guy Garhart, who joined Gursky at the reunion. Garheart and Gursky are first responders with Westminster Fire Engine and Hose Company No. 1.

“But it is incredible to see you,” Garheart added. “The scene is often an orchestrated mess, so we always like to see the good.”

Casey and Allers welcomed the responders who saved Casey’s life to their home to say thank you in October; it was the first time they had all met and another moment for the Casey to learn what happened.

It was an hour filled with questions, answers, tearful gratitude and even humor.

“I remember stepping on your bed to get to you. Sorry about that,” Caho joked when he was reunited with Casey.

“No problem. Thanks for the rib damage,” Casey joked back.

“That’s the best-case scenario when you can walk away with a few broken ribs,” Nickey replied. Rib damage is sometimes the result of CPR efforts.

“The responders saved Roger’s life, but you saved mine,” Allers told Weishaar.

“You did an incredible job,” the dispatcher assured her. “You stayed calm and focused. That is hard.”

When first responders describe tough saves, they often talk about having laser-focused vision and movements among the response team that are collaborative and quick.

It is only after victims are delivered safely to the hospital that responders can reflect and review, which the first responders all do.

“What went well? Where could we have saved a few seconds in the process? Were we compassionate enough? These are some of the questions we roll through together,” said Nickey.

“Everything thing we do — the medicines we use and our procedures — is evidence-based,” Caho added. “After each event, we file detailed information in a report that runs through a national database for review. We are able to learn what went well and what went wrong.”

The need to reflect, to decompress, to focus on their own well-being is also part of a new cultural shift among first responders, according to Capt. Tom Kowalczyk of the Westminster Police Department, who serves as the department’s crisis intervention team coordinator and is a mental health first aid instructor.

“Responders kept their emotions boxed up, but there is only so much you can let in before the box breaks. Now First Responder Wellness is a strong part of the culture,” Kowalczyk said. “We have the Critical Incident Stress Management Team and strong partnerships for wellness with the Health Department.”

“And every chance we can find to celebrate the good, to know about the lives saved, we seize,” Kowalczyk added. “We seize those chances and appreciate them.”

The Carroll County Opioid Prevention Coalition and the local Health Department have partnered to provide just that kind of chance, and first responders have seized the opportunity to celebrate and to meet some of the people they have saved.

Twice, most recently in May 2019, the coalition and the Health Department partnered to host a First Responders Appreciation Dinner.

“Often, EMS teams have no idea what happens to someone once they are dropped off at the hospital,” explained Linda Auerback, substance abuse prevention supervisor at the Health Department. “We wanted to continue the story, to let them know that there is hope.”

“Because of you, I’m able to be a daughter again. I’m able to be a sister and a good friend and a helping hand,” Westminster resident Lindsey Staymates told the responders in May, especially Nickey who took the lead during the response.

“Thank you for not giving up. Every single day when I wake up, I thank God for my life,” she added. “I thank God for those who save a life. Because of you I can see my purpose. I hope that I can be a constant reminder of why you do what you do.” 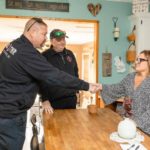 Jackie Dintino with two of her first responders. 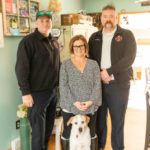 Jackie Dintino and her dog Daisy meet with Joshua Gursky and Guy Garheart who were part of the team of first responders who assisted her on December 28, 2016. 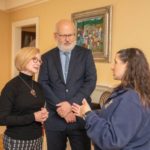 Roger Casey with wife Robyn Allers talk with Bridget Weishaar, the 911 operator who answered the call from Robyn. 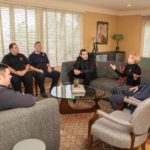 Roger Casey with wife Robyn Allers meet with some of the first responders who saved his life. 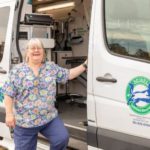