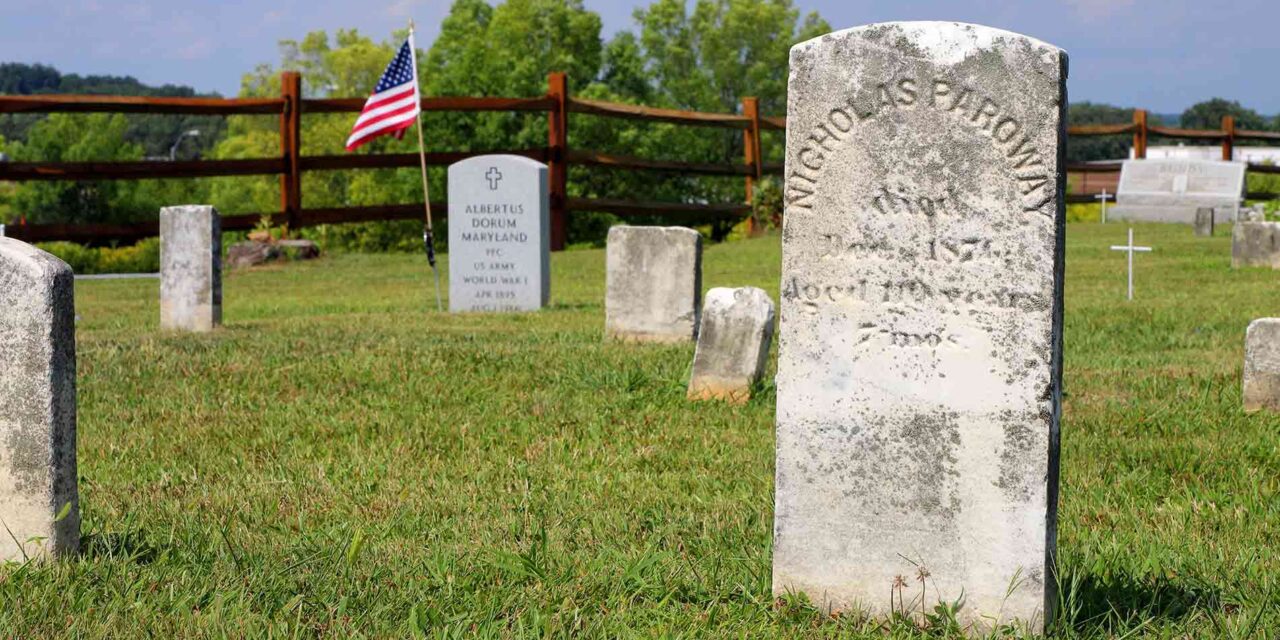 The grave of Nicholas Paroway (above)

At the top of a hill, surrounded by a split-rail fence, Ellsworth Cemetery is a tranquil retreat from Route 140 and the businesses that surround it. Birds chirp. An American flag sways in the breeze that whispers across freshly mown grass. This one-acre cemetery — steeped in Black history — was once no more than a patch of tall weeds. Then a dedicated team of volunteers swooped in to resurrect it. Now, thanks to a recent grant, they have discovered more than they ever could have imagined. 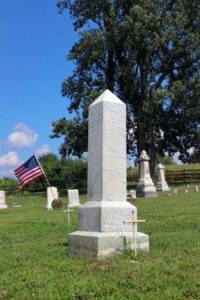 On December 21, 1876, Ellsworth Cemetery was incorporated by six Black Union Army veterans, providing a burial place for Black residents of Westminster. In the late 1800s, the city did not allow Black people to be buried inside city limits. Over time the cemetery — located between what is now the WaWa store and the Church of the Open Door — was neglected, vandalized by hate groups, and fell into disrepair.

Audrey Cimino said she will never forget the day George Murphy walked into her office at the Community Foundation of Carroll County.

“He said, ‘I need help with this. Unless we get some money, we will never be able to save this cemetery.’”

At the time, Ellsworth Cemetery Association owned the land. Murphy was the only living person remaining in that group, so Cimino helped him apply for a quick claim deed, turning ownership over to the Community Foundation of Carroll County. 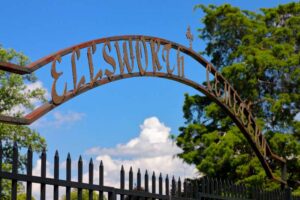 Over the years several groups have assisted. A hand-drawn map in the archives of Union Memorial Baptist Church helped identify some graves so their markers could be restored.

“The Knights of Columbus came to help with mowing and to donate some money,” Cimino recalled. “Donations came in, and we started sprucing the cemetery up.”

When Thomas Greul joined the effort 12 years ago, the grass was 4 feet high.

“We were going to put flags on the graves, but we could hardly find the markers,” he said. “I took a tractor up and tried to mow but couldn’t see the markers. Another guy and I went back and spent a week cutting it with [weed eaters]. These Civil War veterans deserve so much more than they were getting.”

“It was a good community outreach project for our Knights of Columbus,” he said. “Once we cleared everything out, we only had seven markers, but we were told there were 26.

We had documentation of soldiers buried there, including two from the Civil War. We had their service records and obituaries, but no way to know exactly where they’re buried.” 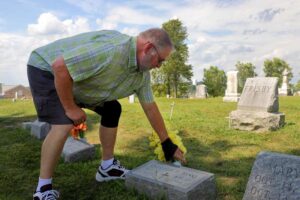 So in 2015 the group brought in ground-penetrating radar. Greul thought they may find up to 20 graves, so he welded 20 rebar crosses. But 182 graves were found.

“We were absolutely floored,” he said. “We went and bought 50 more markers, then realized that wasn’t enough. We were using sticks and markers, and ended up spray-painting the ground to mark them. These were people who were being erased from history. They deserved more than that.”

Three years ago, a split-rail fence was erected, and in 2018,
a dedication ceremony was held. Soon after, Daniel Kloss began working on a historical grant.

Criddle said the grant allowed them to bring in a cemetery conservationist who gave them complete recommendations on restoring the stones, understanding which stones unskilled workers could restore and which stones needed professional attention. 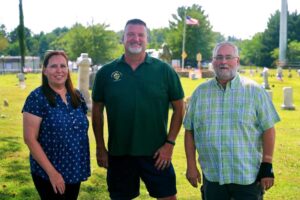 “We are now in the process of bidding out the headstone repairs that need professional help,” Greul said. “We recently had ground-penetrating radar come again, but we don’t know the results yet. They are going to give us a three-dimensional map that we can use to line people up exactly as marked.”

In addition, several trees were encroaching on graves.

“These were large tulip poplar trees, at least 40 to 50 feet tall,” Greul said. “Just this year, we had those trees taken down.”

When asked about the best recent happening, Greul said it was finding Diane Boettcher.

After reading an article in the Catholic Review about Greul’s work with the cemetery, Boettcher reached out. 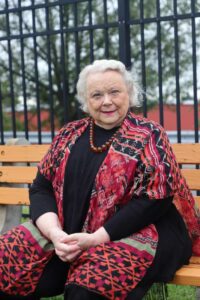 “She sent an email that she wanted to help, so I asked her if she wanted to trim or mow,” Greul laughed. “She said, ‘No, my skill set is a little different.’”

The pair met at Panera Bread in Westminster. Boettcher opened her laptop and typed in a name from the cemetery. Her laptop pulled information from six sources tabbed on the screen. Greul said that’s when he realized he’d “found an angel.” Her research has been invaluable.

“I think we are up to 19 Civil War soldiers who were mostly sold to the Union army,” Greul said.

“The men who enlisted were manumitted [freed] immediately prior to enlisting,” Boettcher added. “Their enslavers were paid $300.”

“These men literally fought for their freedom,” Greul said. “They deserved so much more than to have hate groups smash their stones so they would never be remembered.”

Boettcher spoke of her research, first citing Nicholas Paroway, the first Black person to register to vote in Carroll County, and one of the oldest men buried in the cemetery.

Paroway is just one of several notable figures from history. Rev. John Baptist Snowden is buried there, too, as is James Hope.

“Hope was the valet for Edwin Booth, John Wilkes Booth’s older brother, and he was the one who told Edwin that his brother had shot the president,” Boettcher said. “He wrote about this after Edwin died in a letter to the editor of The Baltimore Sun.” 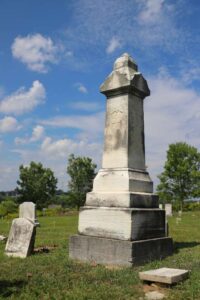 On June 11, the date in 1894 that the original deed was recorded for the six African American troops buried there, a Headstone Dedication Ceremony was held at the cemetery with about 150 people in attendance.

Diane did the research required by the National Cemetery Administration of the Veterans Administration to get nine headstones for the soldiers they’d identified.

Cimino said she arrived early in the morning to put the shrouds on the headstones.

“I walked up to this one World War I veteran. When I said his name out loud, I realized it was probably the first time his name had been said out loud in 100 years” she said. “A chill ran over me, and I started crying. This is so real and so important that we do this, to keep this history alive.”

Boettcher said they now have names of about 320 people believed to be buried there.

“Ten minutes ago, I didn’t know these people existed and now I am mourning for them,” she said.

Criddle also mourns for those not yet identified.

“We have a small portion called Strangers’ Row. The story is if someone passed and nobody knew them, they were buried there. We hope anyone who has information will help us.” 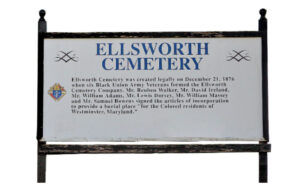 Boettcher sees a future where every grave has a concrete marker. She would love to have QR codes on the markers of all they’ve researched, so visitors can scan and read the rich history that lies beneath the earth at Ellsworth Cemetery.

Today, a new sign hangs over the entrance, there is fencing, many grave sites are marked and restored, and a perpetual care fund is in the works. The advisory committee is working with the city of Westminster to possibly incorporate the land, but the need for financial support continues. Criddle would like to place more benches. Boettcher dreams of a memorial wall with the names of those they know are buried somewhere in the cemetery. She said they did a walking tour last year in November and hope to do it again.

“When I reflect on it, I am stunned by how far people were able to bring themselves,” Boettcher said. “So many had a boot on their neck, and these terrible circumstances, but the resilience has been amazing. The history of Westminster, Carroll County and Maryland — it’s a microcosm of the history of America.”

To learn more or to donate, visit: EllsworthCemetery.org