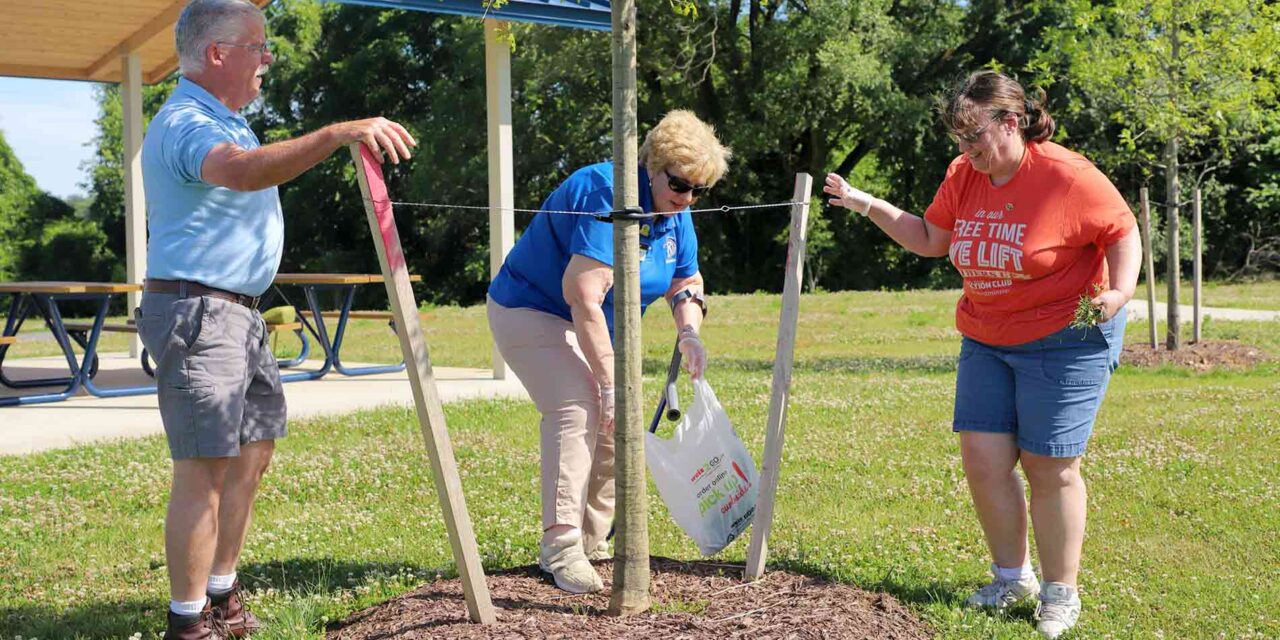 During the pandemic, Sarah Lacoss, a nurse in the intermediate care unit at Carroll Hospital, worked long, scary hours, all the while wondering how much support she and her co-workers really had within the community. That concern made a recent gift from New Freedom Lions Club even more important.

“Each of us got a really great coffee cup with thank you notes in every cup, and candy and Chapstick and gift cards,” Lacoss said. “Everyone in our unit got a cup, about 50 employees. Getting an acknowledgement like this means a lot. It makes us feel appreciated.”

In an era where service clubs report steady declines in membership, Freedom District Lions Club remains healthy. President Scott Walthour said they’ve seen an increase from 70 members in 2018 to 91 members today. He said they are flexible with meeting requirements while encouraging members to invite others to participate in service projects.

The club, often with help from youth in the Leo Clubs they sponsor at Century and Liberty high schools, donates items to pediatric cancer patients at Sinai Hospital. They clean trash at a local park and along Route 32, do preschool vision screenings for 250 to 400 children, collect used eyeglasses and hearing aids to recycle to those in need, provide eye exams and eyeglasses to needy citizens, award college scholarships annually and make monetary grants to nine local schools. They support youth athletics, robotics, and 4-H, lend free medical equipment, provide school supplies to elementary school students, deliver Thanksgiving meals to families in need, provide Christmas gifts to approximately 70 children annually and respond to emergency requests from area citizens and shelters. During the pandemic, they sent thank you packages to hospital staff and local first responders and operated a weekly pop-up food pantry.

“We also provided over 1,200 protective face shields and 150 comfort clips to health care workers at over 30 assisted-living/nursing homes, home health agencies and hospitals during the early months of the pandemic,” Walthour said.

Walthour believes service organizations have a bright future if they adjust to the needs and communication styles of younger members, remain active in the community, sponsor youth sports teams, invite community members and their kids to help with service projects and stay active on social media.

“Be open to new ideas, make it fun and give people opportunities to serve and they will come,” he said.  “Be flexible — in today’s world, almost everyone is extremely busy.”

The club donates regularly to the Silver Run Community Food Pantry, gives college scholarships, lends out medical equipment, supports Boy and Girl Scout troops and the local Rec Council, sends shipments to soldiers overseas at Christmas and helps with multiple other community needs — but those donations are slowing down. Without a full workforce, Moody said they struggle to hold fundraisers.

“Unfortunately, there are clubs — mine included — where it seems that there’s no interest in joining,” Moody said, suggesting they may need to merge with another club and count on community youth for change. 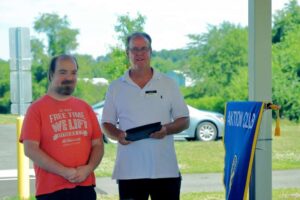 Tom Welliver, right, with the Kiwanis Club and Derek Hamburg, a member of the AKTION Club of Westminster.

But Welliver’s club did something innovative.

“We have a virtual group,” he said.” These are mostly people in their 30s and 40s. They join us in activities we have planned and initiate new projects on their own.”

The club gives high school scholarships and sponsors youth projects. They donate to Together We Own It, the Youth Services Bureau in Carroll County and the Boys and Girls Club.

“We also help with Carroll County Childcare Center. We’re a major sponsor and supporter of Battle of Books — an outstanding program/competition through the Carroll County Library. We are all about sponsoring youth, youth development and assisting underprivileged youth,” he said.

Kiwanis also pulls in 40 to 50 local members through their AKTION Club.

“The AKTION Club is comprised of clients of Target, and Change/Penn-Mar [Human Services],” Welliver said. “These are members of our community with disabilities who want to give back, too.”

Kiwanis is a staple at local events, working at all three Westminster City Strolls, local parades, and Westminster Fallfest.

Stanley Windsor, administrator at the Westminster Moose Family Center, attributes a growth in membership to their many activities. He said they currently have 983 members, with a gain of 57 members in the last year. In addition to bingo, karaoke, dinner specials and live music on Friday nights, the organization also hosts pool tournaments, car shows and cornhole tournaments, which Windsor says helps bring in a younger demographic.

Windsor said they support activities including a home for children in Illinois and one for senior adults in Florida.

“We do a lot of community service and donate our hall for nonprofit fundraisers for different organizations,” Windsor said. “For the police and fire companies, we have a stuffed moose we donate to be kept in the police cars or fire engines for when a child is in an accident or is in need.”

Sharon Smith, auxiliary president for American Legion Auxiliary Post 31 in Westminster, said the Legion has about 300 dues-paying members on the books, but only 15 to 20 attend meetings.

“We have a membership person who calls people to recruit,” Smith said. “We’ve set up booths at events and handed out flyers, but we don’t get much response. A lot of people think we’re older people sitting around a bar, but when they come in, they find out we are so much more than that.”

The Legion donates to local homeless shelters and the cardiac unit at Carroll Hospital annually. They sponsor Boy Scout troops and collect supplies for local schools. The Legion is known for Boys State and Girls State programs in which local students are sponsored to attend a weeklong immersive learning experience focused on government at Salisbury University or McDaniel College. Smith said they sponsored a girl from Winters Mill High School to attend Girls State at McDaniel this year. 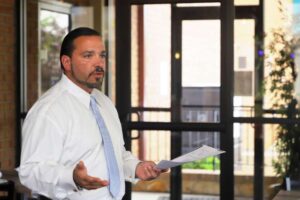 Embedded in Carroll’s history, the Legion has held the annual Memorial Day Parade in Westminster for over 150 years. It’s the longest-running parade in America.

“If someone comes with a need in the community, we do our best to help,” Smith said.

Mt. Airy Rotary Club gives annual college scholarships, hands out “dictionary almanacs” to third-graders in Carroll County, and contributes food to the Mt. Airy Net food bank. They also paid for and contributed much of the labor to build the fence at the Mount Airy Community Garden.

According to club President Dick Wilcher, the club is doing well with 35 members.

“If you get a couple to join, they will bring in their friends,” he said. “We have enough fun activities to keep our membership busy. That’s the key. We do a fruit sale, the Mount Airy Duck Race and our newest event is the Mount Airy Mile.”

The Mount Airy Mile, scheduled for Aug. 13, is a one-mile race down Main Street, benefiting locals with extraordinary health care-related expenses. Each year, their Let’s Talk Trash event challenges the town of Mt. Airy, N.C., to see who works the most hours with the most volunteers cleaning up trash in their towns.

Steve Aquino, president of the Rotary Club of Westminster, said the group contributes to 20 nonprofits in the community, supporting the Carroll County Veterans Independence Project, the Carroll County Sports Hall of Fame, road clean-ups, the “dictionary almanac” project, high school scholarships, and a Citizen of the Year award — given to the Health Department’s Ed Singer this year.

“Membership, like with others, has been difficult,” Aquino said. “We’ve stayed flat but are not declining tremendously as some are.”

“We try to help them understand how it helps them and their business as well, and they realize that,” he said. “A lot of it is that they’re busy with kids. But it’s about balance. Having a balance between business, family and community is important.”

With the club’s 100th anniversary coming up next year, Aquino is staying focused.

“There’s always a core group holding it all together,” he said. “We try to lead the charge and hope that others follow.” 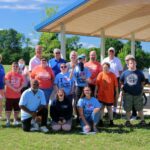 Members of the Kiwanis Club and the Aktion Club 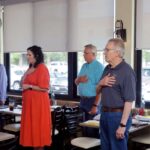 The Rotary Club of Westminster 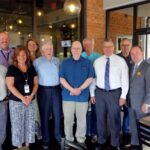 Members of the Rotary Club of Westminster