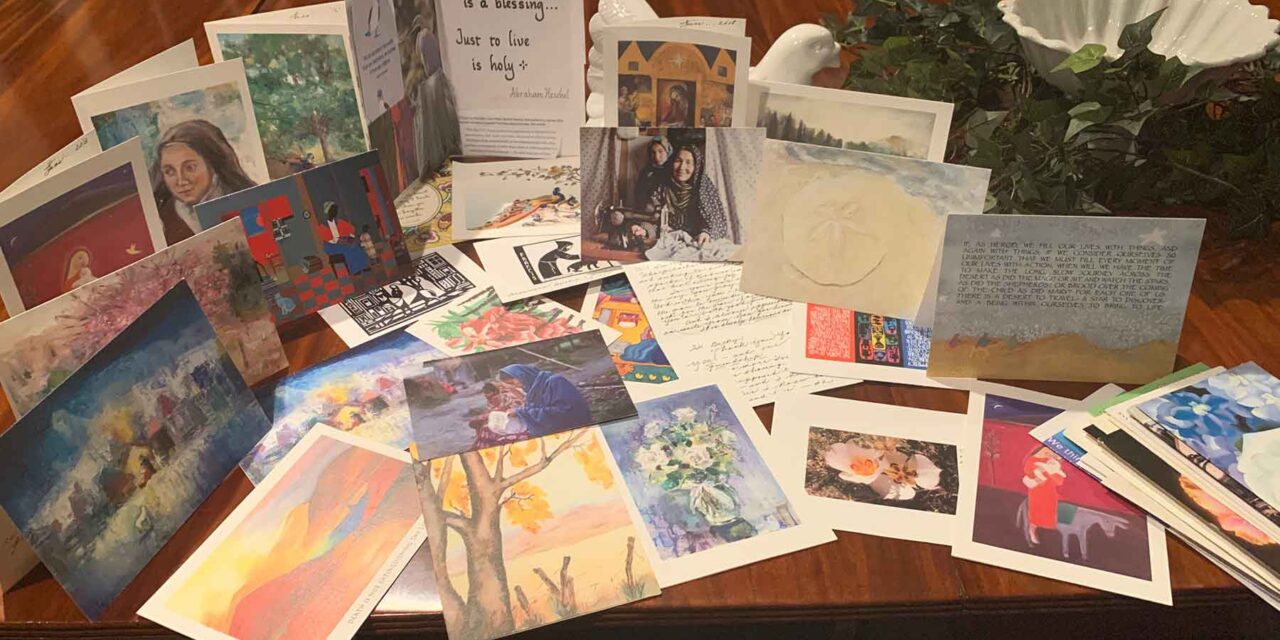 Without letters, Sophia Kemp, would have missed meeting and marrying William “Bill” Heron. Their children, grandchildren and great-grandchildren in Carroll County wouldn’t have the love story of all love stories to talk about and to share with friends.

And letters enabled Melanie Dunn to remain connected to her high school sweetheart, Deric, when she left Maryland for college in California and he relocated to Massachusetts.

“I wrote him a letter every day for the first year we were apart,” the Finksburg resident recalled. “I was 17 when we met, and we have been married for 27 years now.” 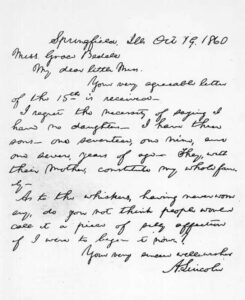 As letter writing continues to swing from being hailed as an important tradition to a dying, if not dead one, many residents still cherish letters and send them sealed with a kiss.

The pandemic and this holiday season in particular, have also sparked renewed interest in letter writing and sending holiday cards.

“Now more than ever it is so important to stay in touch, especially during the holiday season,” said Carole Spence, who lives in the Shipley area of Carroll County. Spence has written letters and mailed Christmas cards for more than 50 years. “When a letter or a card arrives from a friend, nothing else in the mailbox matters.”

“My Christmas cards often include my Snoopy drawings and details about the annual New Year’s party,” she added. “This year I’ll offer assurances that our friendships remain strong, that the party will happen. It will indeed be a new year once we can gather again.”

During the pandemic, residents are finding time to pull out boxes of holiday cards, old love letters, letters from or among family members, and letters that connected soldiers to their sweethearts and family.

Westminster resident Rebecca “Beckie” Teeter Herrick cherishes hundreds of letters she saved that were written by relatives and friends. A decorative box under her sofa holds letters bundled with colorful ribbons. Some were penned by her mother, the late Priscilla Gray Teeter, to her parents. There are bundles from her Aunt Mary, her Uncle Jim, and there is a bundle of cards painted by the Carmelites of Reno, a monastery of nuns in Nevada.

In her barn, Herrick has letters that her mother saved. In the basement, she has letters exchanged between her parents.

“There is nothing extraordinary in these letters,” Herrick said. “They are special to me because they are penned by people I loved — they offer a physical connection to some special people.”

One letter to her mother, Mary Emma Edwards Gray, postmarked March 15, 1950, captures the adventure of a day off while Teeter was a nursing student at Johns Hopkins.

“I went to Sherwood Forest today. 8 of us had a great time. We lolled around in the sun, ate every minute and curled up on the cots on the porch in the afternoon and read mysteries and slept and slept. … We came home at seven and I’ve washed and starched since then. Guess I should have iron[ed] some before bed. (You know how I love it…)”

Five letters that changed the world

The 1860 Republican presidential candidate Abraham Lincoln, a clean shaven man at the time, received a letter from an 11-year-old girl suggesting that he grow a beard because his face was “so thin” and “all the ladies like whiskers.”

The 1939 letter Albert Einstein penned to President Franklin D. Roosevelt that started the Atomic Age. The letter alerted Roosevelt to work scientists were doing that could result in the creation of “extremely powerful bombs of a new type.”

The 1700s letter from George Washington to an operative named Nathaniel Sackett. The letter resulted in the creation of the Culper Spy Ring that helped win the American Revolution.

The 1920 letter from a Tennessee politician’s mother that changed his mind in favor of ratifying the 19th Amendment, giving women the right to vote.

For letter details, go to mentalfloss.com/article/581657/letters-that-changed-the-world

Letters have changed history; they chronicle history. They have opened hearts and wounded them. Letters have engendered new art forms and carried advice and reactions to turbulent times.

“My siblings and I received letters several times a week from our mother and my grandmother while we were in college,” Herrick said. “They were always short and sweet and often accompanied by comic strips or articles from the paper.”

“Their letters were comforting,” Herrick added. “They made me feel rooted when so much at that age is not. The letters offered a connection to my past and to who I am.”

“There is something really special about both writing or receiving a hand-written letter,” said Kim Rhoton, a licensed therapist in Westminster who has worked with families, couples and individuals for more than 20 years. “For the writer, writing a letter is a great way to express thoughts and feelings openly and directly. For the person on the receiving end, you feel thought about, cared for.”

When Eldersburg resident Lauren Minnich received letters from her mother, Sue Von Staden, while she attended Frostburg and then the University of West Virginia, they made her homesick.

Years later, when she embarked for a new, stressful job in Richmond, Va., the letters, “so many of them,” were “rays of sunshine.”

“My mom is the type of mom who writes or finds the perfect card,” Minnich said. “She rarely left milestone events go cardless. Even when I started my period, I received a card.”

Minnich confesses that she has not followed in her mother’s footsteps.

“Mom often gave me the perfect writing paper and envelopes and said, ‘Here you go.’”

But the letters never went.

“I’m actually an anti-card, anti-letter person,” Minnich said. “Computers and the ease of emails — and instant responses … I’m for that route.”

Despite her cherished collection of letters, Herrick’s letter writing didn’t surge until email and work processing emerged. She enjoys typing rather than sending greetings in her “abysmal” handwriting.

“I love typing emails/letters,” she said. “I know a lot of people might mourn of the dying art of letter writing, but I find connecting with my friends is easier with social media. I am just as excited to see a friend’s name pop up in my inbox as I am to receive a paper message. These days I also don’t feel good about contributing to paper waste, especially after the many times I mess up and rewrite handwritten letters.” 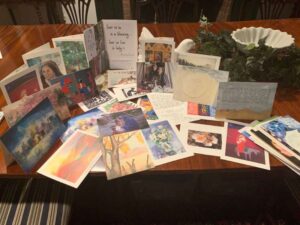 Beckie Herrick’s collection of cards from a friend.

Herrick and others note that they love all the letter writing accoutrements more than actually writing letters.

Fountain pens, colorful pens, good stationery and even a desk for letter writing — “I have them all, but I rarely go to that desk,” Herrick joked.

True letter writers, like Herrick’s and Minnich’s parents, rarely send letters without clippings from newspapers, recipes, quotes from books, cash or artwork. Their letters eloquently capture their speaking styles, their humor, their concerns, their happiness.

When a letter arrives, especially from her sister, Heather MacLeod, Melanie Dunn “gets a lift.” She is taken back to many happy memories and one of her grandfather, Otto Werle.

“He lived in Oxon Hill and on our birthdays, he would address the envelopes with fancy script,” she says. “Heather is an artist and she is still an avid fan of letter writing. I wrote letters throughout my childhood and most of my adulthood but she remains the one who carries the tradition on.”

“An envelope is rarely just an envelope,” Dunn explains. “She will fold magazine pages into an envelope or adorn a basic envelopes with her artwork and collages. I have saved so many of her letters; they are so her. Her humor and talent are part of each letter.”

“I have saved so many of her letters; they are so her. Her humor and talent are part of each letter,” Dunn said.

The sisters talk on the phone often. After many of those calls, Dunn often receives a letter filled with information about the topic that was the highlight of the phone conversation.

“We talked about butterflies once,” Dunn recalled. “I was beginning a new job at Carroll Community College. She sensed how I was feeling and sent me a letter with photos of butterflies and their parallel to new beginnings … I have that card on my bulletin board at work.” 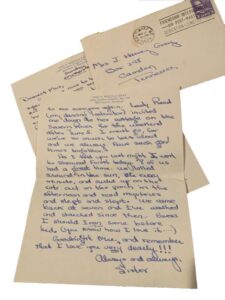 A letter written in 1950 by Herrick’s mother, the late Priscilla Teeter, to her mother, Mary Emma Edwards Gray. Teeter was in nursing school at Johns Hopkins.

According to Von Staden and Minnich, the family story about their love goes like this:

Sophie Kemp, Von Staden’s mother and Minnich’s grandmother, lived in New York during the Great Depression. She worked on a neighbor’s farm.

“She would weed beets, do anything,” Von Staden said.

Bill Heron, Von Staden’s father, and his best friend, Norman, hopped trains during the Depression; they lived the hobo life, looking for work and then sending the money they made to their parents in Maryland.

One of their stops was in New York where Sophie was working. Bill knocked on the farmhouse door with his traditional ask: “Do you have work?”

The neighbor answered, “Not now because the girls are working, but I’ll give you food.”

Bill kept in touch with the woman when he left to fight in World War II. Eventually, he asked her if one of the girls who worked on the farm would be willing to write him and accept his letters while he was away.

Sophie didn’t hesitate to be his pen pal. They wrote often.

When Bill returned, he brought a garnet promise ring back with him. When he asked Sophie to marry him, she said yes as quickly as he had when the farm owner asked if she would be his pen pal.

Their first child, Sue, was born in January, the month marked by a garnet birthstone. Norman, Bill’s train-hopping companion, became her godfather.

“Some may say that letter writing is a dying art,” Dunn says. “It’s evolving and perhaps declining, but there will always be people who keep the practice alive.”