The Truth About Ben’s Truffles 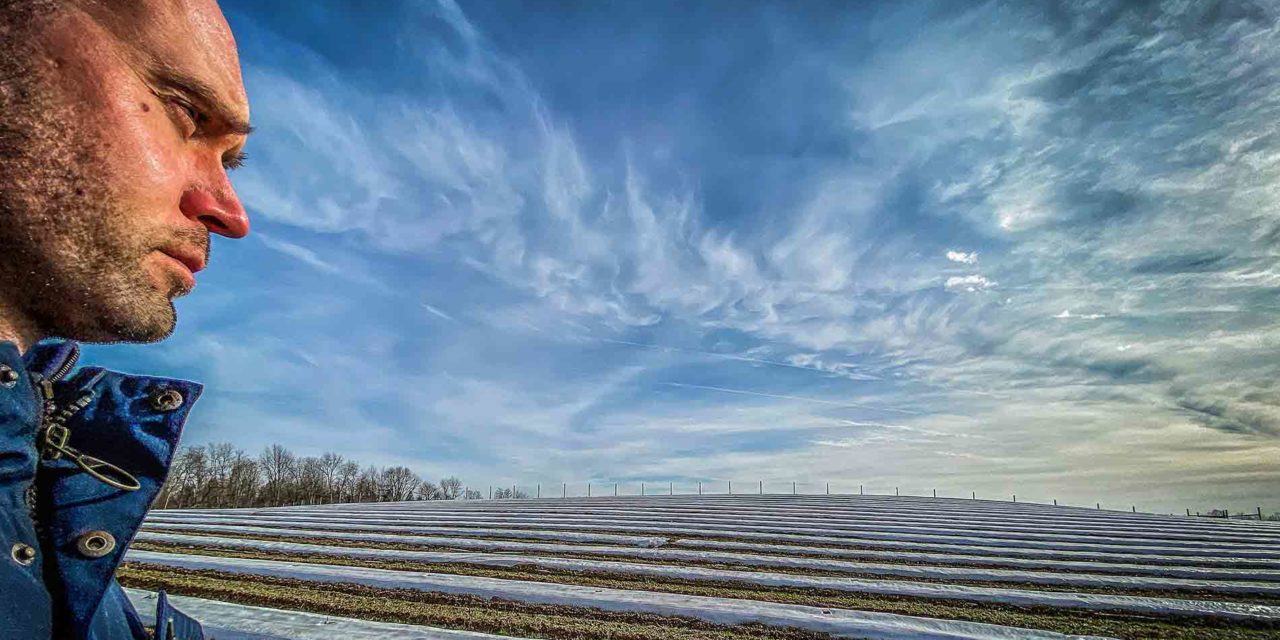 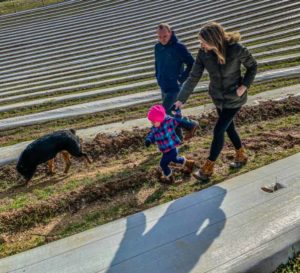 Ben Kable’s curiosity about truffles began in 2005, while he was in a horticulture class as an undergraduate at Virginia Tech. His professor, Dr. Alex Niemiera, was passionate about the meticulous combination of soil, shade density, and protection needed to enable the mushroom to grow. His professor’s passion was contagious, and Ben Kable caught it bad.

Kable’s curiosity became a fascination, the fascination became an obsession, and that obsession led a high-stakes business in Carroll County called Wakefield Truffles. It is a business that is seeded, literally, five to seven years before Ben will reap the benefits of the orchards.

Wakefield Truffles rests on the 150-acre farm owned by his parents, John and Robin Kable. The Westminster farm was once owned by the Shriver family.

“Truffles are nothing fancy; they are a fungus,” said John Kable, who, with Robin, has caught Ben’s passion for truffles and invested in the venture. “Essentially, truffles are mushrooms that grow on the roots of specific tree species.”

“In reality, truffles don’t actually taste like anything; it is their smell that distinguishes them — the aromatic compounds that evaporate from them,” Ben added. “When you shave them in thin layers on hot food, the chemicals in a truffle evaporate. That thin truffle on hot food excites the molecules that leap in air and fill your nose.”

Truffles are tasteless and far from fancy, but they are chef’s gold; some of the finest restaurants around the world will pay anywhere from $60 to $80 an ounce.

One reason truffles are so pricey is that before their thin shavings hit hot food, there is a tremendous amount of research, time, money and risk invested. 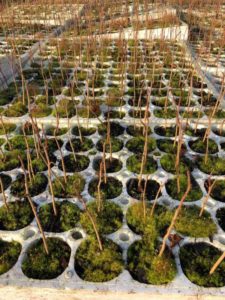 Burr oak and hazelnut seedlings, potted and ready for planting. These were started two years ago.

The Kables are no strangers to any of these factors. Ben and John are veterinarians who work with Airpark Animal Hospital in Westminster, and the entire family, which includes Ben’s wife, Chrissy, and siblings Kye, Caroline and Thomas, and Thomas’ wife Caitlin, have an insatiable curiosity about how things work (or don’t work).

“I did lots of research about truffles on Google Scholar as a reprieve from the rigors of vet
school,” Ben joked.

The first Wakefield Truffles orchard — 800 trees shipped from Oregon and inoculated for burgundy truffles — was planted two years ago on 4 acres. (Truffles grow along the roots of certain tree species.)

A second orchard — 1,500 trees shipped from Canada and inoculated for native Appalachian truffles — was planted this year.

Truffle farming can cost as much as $15,000 per acre — or even more — the Kable’s and others who have grown a few trees in the area confirm. And that $15,000 does not include routine maintenance and care.

It will take five to 10 years of management before the first truffles are ready to harvest, Ben said.

Management “involves monitoring and sometimes altering the pH in the soil,” he added. “We also remain aware of the density of the shade, and we watch for voles. One farmer lost a whole crop because voles crawled under the protective fabric that is rolled over the seedlings and ate the roots. The investment literally blew away in the wind.”
Ben will be anywhere between 34 and 39 before the first truffle is unearthed. John Kable will be anywhere between 66 and 71 years old.

“Oh, I know. I will probably be in a scooter, asking Ben to show me where to roll to see a truffle,” John said.

“In a scooter with a poodle on his lap,” Ben joked.

Ben and Chrissy Kable’s daughter, Emory, was 1 month old when the first truffle field was planted.

“So when her field of dreams produces its first truffle, she will probably be between 5 and 10 years old,” Ben said.

Emory will also know a lot about truffles.

Many truffles are found in the wild — often in places that truffle hunters keep secret — and always rooted out by a well-trained dog or a pig.

“Because of new agricultural technology and methods, now you can grow an orchard and have a higher chance of good yields,” Ben said. “The science known now wasn’t known years ago. “You still have to go out and find the truffles with a dog or a pig, but the growing process, the science of it, is always evolving.”

The evolving science linked to his truffle business is one thing that thrills Ben the most.

“As a biology major and now a veterinarian, I have constant tools to access science and keep up with the new stuff,” he said. “It is amazing to be able to speak to the researchers who are doing the current studies — researchers in Australia, Spain, France and the United States.”

Thirteen years after the horticulture class, Ben and Niemiera, share new research and give each other advice.

Ben is as inquisitive now as he was in college, Niemiera said. 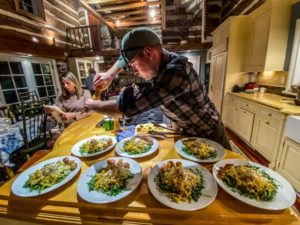 Ben puts the final touches on a pasta Bianchetto truffle entree for his family.

They both still share an appreciation for the “culinary delicacy” of truffles and the fact that the “profit per land unit is very high — if successful,” he added.

There are others in the county who share Ben’s passion and have even planted trees, hoping for truffles. No one has had success yet, but no one has poured the same amount of resources and research into their attempts.

Adding to the international truffle farmer think tank they’ve formed, the Kables keep in close contact with local folks who farm and with Jamie Weaver, a watershed forester based in Westminster.

“We confirm that we are all on the same page and learn from each other,” John said. “Everything we asked them about usually has them thinking we are nuts. This is outside the realm of normal practice.”

“Ben continues to blow my mind with all that is going on,” said Weaver. “His venture is a lot bigger and more novel than the few others who are trying to do what he is doing. His scientific approach is what distinguishes it.”

“Ben is willing to take risks. I love sharing advice with him,” said Stanton Gill, an extension specialist with the University of Maryland Extension. “I keep wishing him all the luck.”

And Gill knows about the need for luck. He farms “unusual things” in Carroll County, he explained. “Lemons, paw paws, 38 types of peaches, as well as European, oriental and beach plums.”

Baltimore-based restaurant Woodbury Kitchen recently contacted Gill for paw paws — 100 to start with. “They called right back and wanted 300 pounds for the following week,” Gill said.

Ben and his family’s ideal is to find their first truffle in six years, and then 10 to 100 truffles the following years. That ideal also includes reaching full production from a sustainable farm that yields 20 to 100 pounds of truffles per acre.

Ben enjoyed his first truffle in Italy in 2010 with Chrissy.

“We were lucky enough to hit the Alba Truffle Festival,” Ben said. “We bought a white truffle and a black truffle and carried them around in our backpacks. We’d take them out of the packs, get blasted by the truffle scent and shave off thin layers with a pocket knife over light pasta with a little butter and parmesan cheese.”

Ben and his family hope that his last truffle will be from their own bountiful farm. 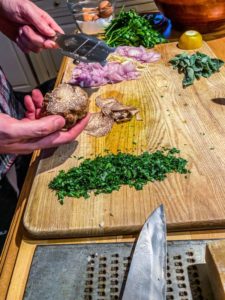 A special truffle shaving blade is used to slice off slivers of a truffle.

A Few Fast Facts About Truffles 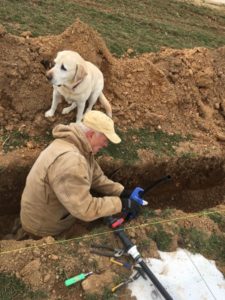 To find a truffle, the best way — and for many farmers, the only way — is with a dog or a female pig.

“That dog is essential to the harvest, and for farmers the dog is one more expense, a $5,000 expense,” said Stanton Gill, an extension specialist with the University of Maryland Extension.

“To find a truffle, train your dog to sniff for them and use indicating behaviors when found,” said John Kable of Wakefield Truffles. “Those behaviors might be to paw the ground, sit — and not to pee on it.”

The Kables hope Daisy will find the first generation of truffles at Wakefield Truffles, and then “foster future sniffers so her legacy will live on,” Ben said.