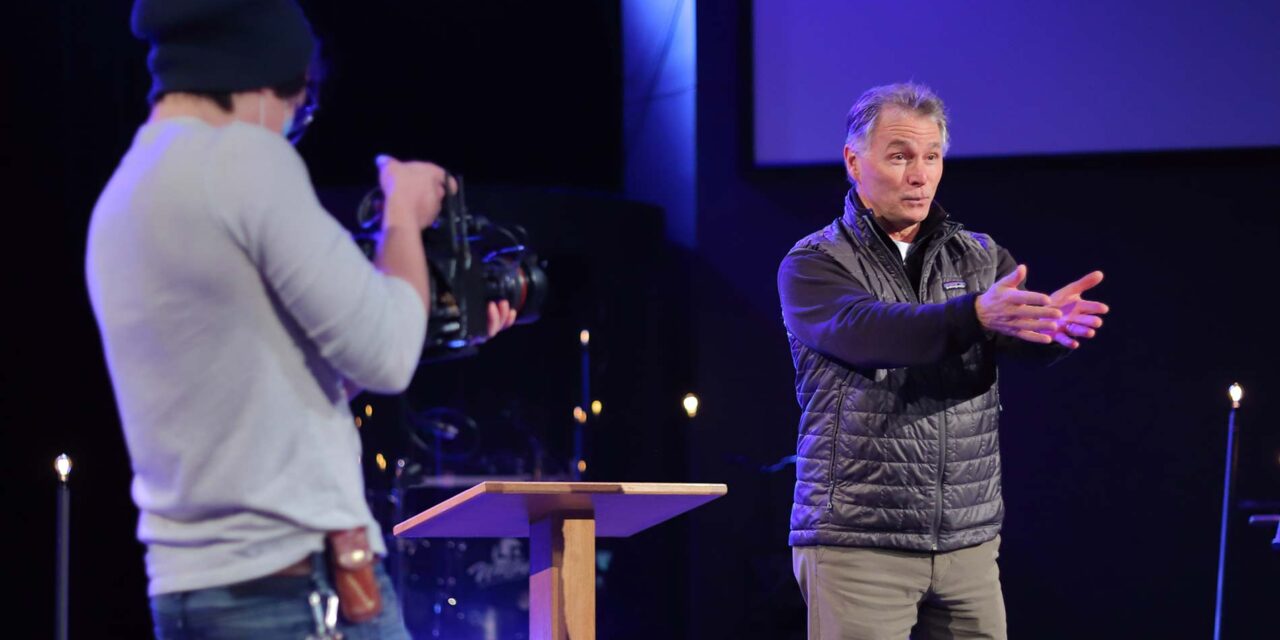 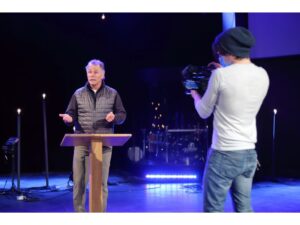 The word “congregation” says it all. Worship, by its very nature, is often communal.

Yet in the days of COVID, many of the foundational rites and rituals of communal worship — such as passing the offering plate — that have been practiced for generations are simply no longer safe. Thus, they’ve had to be reconfigured, if not simply eliminated.

The Rev. Jenny Smith, pastor of Wesley Freedom United Methodist Church in Eldersburg, illustrates a fundamental strength that has made these sometimes-drastic adaptations possible: “The church is not a building. It’s a people that have a ministry to share. In that sense, we’ve had full ministry at every moment during the pandemic.”

“I think we’re all navigating in uncharted waters,” said the Rev. Joe Duke, chief pastor at LifePoint Church. “But God often uses difficulties to remind us that he is with us, no matter what.”

Duke says that when the pandemic hit, his congregation of about 2,000 went from four weekend services to just one, which was also live-streamed. In the meantime, using “over-the-top regular communication,” the staff of LifePoint’s children’s ministry and student ministry, “have done a remarkable job at keeping in touch with those they lead.”

Duke said he has also stayed in constant communication with his congregation through “short video reminders of God’s faithfulness and how He can help us walk through this together.

“If we’re willing, hardship can move us beyond simple answers and Christian cliches,” added Duke, who also held outdoor prayer gatherings during the warmer months. “In the last year I’ve seen people realize that Jesus is not a good luck charm. He’s bigger than that.”

Though LifePoint has seen a slight downturn in funding, Duke notes that his congregation has been extremely generous. The church established a COVID fund to help those in need during the pandemic. “We’ve also been able to support over 25 local organizations,” he said.

Duke also points out that his church’s primary means of receiving offerings had already moved online before the pandemic.

“For that reason, many in our church were already in the habit of giving online,” he added. “Others began giving online since we went through a period of lockdown with no in-person services.”

Duke says technology has been “a blessing.” He also points out that, “uncertain times are a catalyst for spiritual inquiry. We continue to welcome many new people. We’ve also seen a return of people who had walked away from church or disengaged with God.”

Yet he concedes that at times he’s felt “a kind of grief, realizing that there are so many people in our congregation that I haven’t seen in person in almost a year.”

As for the prospect of an eventual return to normalcy, Duke is uncertain. “Maybe we never will, or if we do, we may be waiting a long time,” he said. “Until then, we have to continue to think about ministry in out-of-the-box ways. For us, that means putting more horsepower behind our online church.” 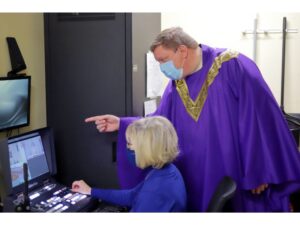 Father Mark Bialek, pastor of St. John Roman Catholic Church, says that the pandemic has impacted Catholics differently than it has some other denominations.

“We have to receive the Eucharist (the ceremony commemorating the Last Supper, in which bread and wine are consecrated and consumed) and celebrate the Sacraments, and all that has to happen in-person,” Bialek explained.

“That’s when our school went virtual and we immediately began streaming our Masses on our parish’s Facebook page. By then, we’d also begun doing drive-through confessions and outdoor Eucharistic adoration.”

In May of last year, when restrictions were temporarily eased, St. John was able to resume indoor services, following procedures issued by government officials as well as the Archdiocese of Baltimore. 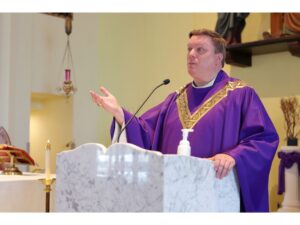 These procedures, of course, came with strict limitations. Bialek says the archdiocese mandated that services be no more than 33 percent capacity — “even less than the state of Maryland permits. Our church holds 1,400 people. Up until now our largest gatherings have been 280 to 300 people.”

Bailek says his large congregation has proven to be both generous and flexible in continuing their financial support.

“As the pandemic took hold we already had an established electronic giving program,” he said. “For those who still wanted to give in a more traditional way, they could drop their offertory envelopes in a curbside drop box while not even getting out of their cars, or they could mail their envelopes to the parish. Our parishioners were very supportive in getting us through the challenging period when in-person Mass was just not possible.”

Before it got too cold, St. John was also holding outdoor services. It plans to continue them in the spring.

Meanwhile, the church has greatly ramped up its virtual offerings. “We went from using our iPhones to stream our Masses to investing in a three-camera, HD live-streaming system,” Bialek said. “It creates a wonderful experience for people who are watching. We get up to a thousand views a week. It’s been a great source of evangelization for our parish and many others.”

Bialek said that both live-streaming and an increased reliance on Zoom will remain in place long after the pandemic runs its course.

“We weren’t using either before, except once in a while for major liturgies and celebrations. But now they’re here to stay.” 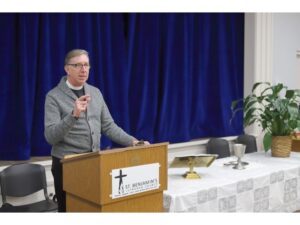 St. Benjamin’s happened to have an antique farm wagon that had been restored by Pennsylvania-Dutch artisans. It was mostly used in festivals and parades.

No one could have foreseen how important it would become to the congregation once the pandemic hit and the church began holding “drive-in” services in its spacious parking lot.

“It turned out to be just the right thing to use for a stage and pulpit,” said St. Benjamin’s pastor, the Rev. David S. Schafer. “From Memorial Day through most of the summer we gathered in our parking lot. People could roll down their car windows and listen to the service on our PA system, or they could listen on their car radios.”

St. Benjamin’s was able to procure its own FM radio signal. “I asked one of our members, who’s a techie and loves this kind of stuff, for help,” Schafer explained with a hint of amazement. “He found a frequency that was unclaimed, and it became ours. We’re still using it.”

Like many other congregations, St. Benjamin’s was able to briefly resume restricted indoor services in the fall, when infection rates took a temporary downturn. “We marked off the pews so that people were spaced apart, and everyone had to wear a mask,” he said. “If you were a singer, you had to wear both a mask and a face shield.” 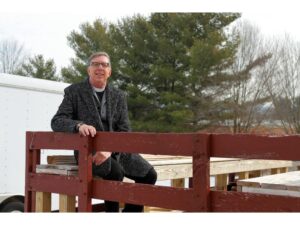 But this proved to be a short-lived reprieve, and by Thanksgiving they were back outside.

Meanwhile, St. Benjamin’s leaned increasingly on technology to minister to those who weren’t comfortable with any form of live worship, either indoors or outdoors. “We also started live-streaming on YouTube, where services are also archived so people can watch them at their leisure,” he said.

Somewhat surprisingly, Schafer says that the church’s offerings and receipts are “better than they were before the pandemic. We’ve also had four new families join us during our drive-in time.”

He also points out that some of these innovations will most likely stay in place for good. “We’ll never pass an offering plate again — just think of all the germs as it’s passed around from hand to hand,” he said. “And we won’t have the ‘Sharing of the Peace,” where we all greet each other and shake hands. Also, instead of physically putting bread in people’s hands for Communion, we now use sealed packets that nobody touches before the person using them opens them.”

Schafer takes quiet pride in how his members have risen to such challenges. But there are aspects of the forced adaptation he just can’t sugarcoat.

“What I miss most is the interaction,” he said. “I miss looking into people’s eyes and looking at their mouths and seeing if they’re getting what I’m saying and if they are agreeing or disagreeing with it.

“The best part for me was always greeting people Sunday morning after the service,” he said. “I haven’t done that for more than a year. I just totally miss it. I mourn for it.” 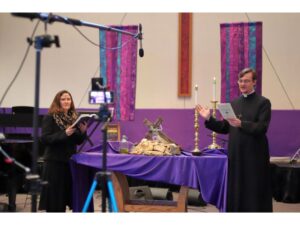 Pastor Smith arrived at Wesley Freedom last July, in the midst of the pandemic. She was immediately struck by the resilience, commitment and ingenuity of her new congregation.

“When I pulled into the parking lot at 7 a.m. on Sunday mornings there were already a dozen cars there,” Smith recalled. “Our members were setting up parking cones, rehearsing the band, preparing to welcome people and doing whatever they had to do to worship. They were there whether it was freezing cold or hot as the dickens.”

Wesley Freedom, in compliance with state and county guidelines, suspended indoor services and ministry in March of last year and immediately moved online before eventually moving outside.

“We have become students of how to worship virtually,” Smith said. “As a result, we’ve been in touch with people not just locally, but in dozens of states, as well as with servicemen and -women overseas. Now, we have a truly global campus.

“And now that we’ve learned how to do it, it’s not going away,” she added. “We’ve made a commitment to stay online forever.” 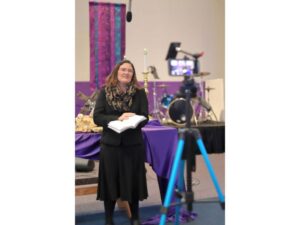 With the help of a grant from the county, the church, in anticipation of eventually returning indoors, upgraded its HVAC system to the point where, according to one congregant, “it resembles the system in a commercial airliner.”

Smith says that her church’s finances have more or less remained steady. “The people of Wesley Freedom have been creative and generous,” she explained. “Some have mailed or driven their offerings to the church. Many shifted to online giving options, which have quickly become the foundation of our financial health.”

But back to the Sunday parking lot services. In preparation, church trustees and other volunteers from the congregation marked off “squares” in the lot so that families could worship together while keeping appropriately distanced from their neighbors. They also put out boxes — also appropriately spaced — for people to sit on, and set up several tents. These outdoor services went on until November, when it finally got too cold.

“We had really strong attendance outside, and the outdoor services served as a kind of revival,” said Smith, whose “office” during the warmer months was a green picnic table. “It was just fun, and memorable. People have asked me, ‘Can we keep the outdoor services when COVID is over?’ And we’re certainly looking at that.”