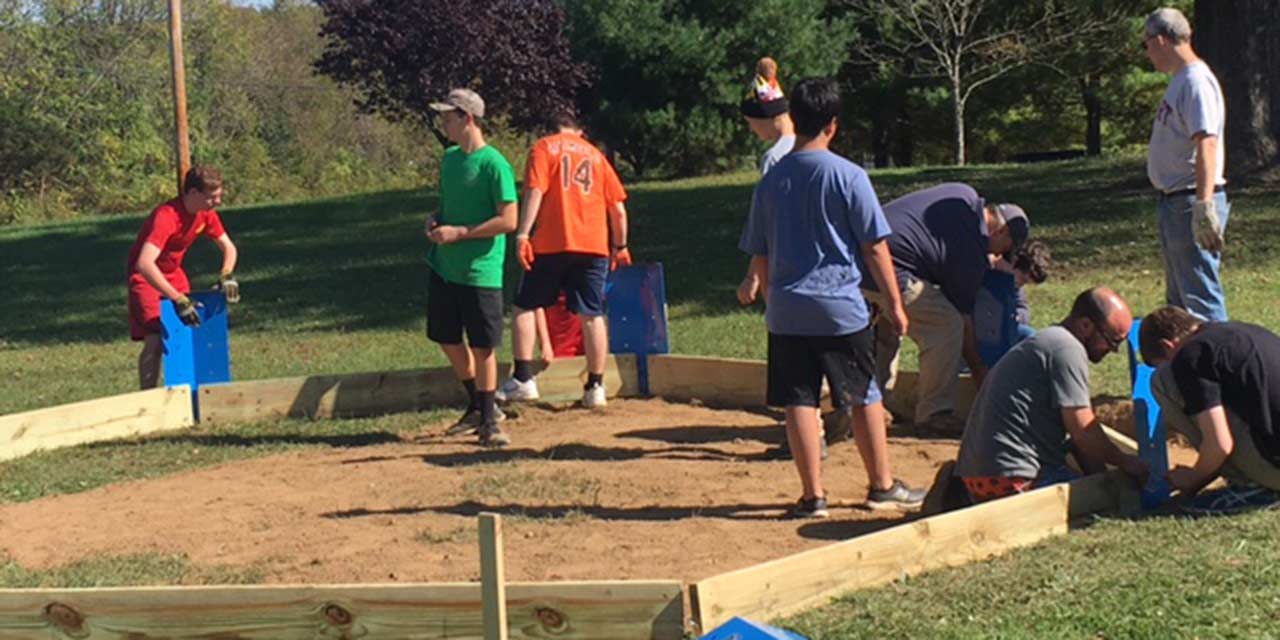 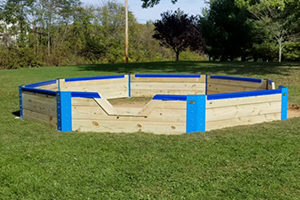 The Boy Scouts of America has been an important national institution for more than a century. For generations, boys have joined the organization to have fun, learn life skills and form lasting friendships. And as they do so, they are instilled with the values and goals that Scouting was established to promote: self-reliance, leadership and service to others.

Members advance through Scouting based on their learning and service — and the earning of merit badges, which are the most notable marks of a Scout’s accomplishments. And a dedicated few rise to the highest rank that Scouting offers: Eagle.

To become an Eagle Scout, a boy must not only master the skills and knowledge required of a Scout, he must complete an Eagle project, some work of lasting benefit that demonstrates the Scout’s abilities and his devotion to the community.

The Carroll District of the Boy Scouts of America boasts over 60 troops with more than 1,500 members, and is one of the only counties in the United States that comprises its own Scouting district. Carroll County produces a sizeable number of Eagle Scouts each year, and their Eagle projects are great gifts to the community.

One of these Eagle Scouts, Adam Barnes, was honored when the Baltimore Area Council of the BSA recognized his project — one of 504 eligible for consideration — as a Top Ten Eagle Project for 2016. In recognition of his accomplishment, July 28, 2016, was declared Eagle Scout Adam Barnes Day in Carroll County.

His project was the installation of a gardening pavilion at the Carroll County Farm Museum in Westminster.

The space had previously been occupied by a concrete slab with a picnic table on it.

“The gardeners at the Farm Museum are volunteers,” Adam, 16, said. “They use that area to pot plants, so we built shelves into the structure to help them.”

“We raised about $1,500 through a pancake breakfast at Grace Lutheran Church and the rest by donations from family and friends,” he said.

No one understands the value of this accomplishment better than Adam’s father, Jeff Barnes.

“We are a Scouting family,” he said. “My wife, Heather, and I are Carroll natives. I earned my Eagle in 1988, grew up a little bit, got married, started a family, and now we’re back at it.” 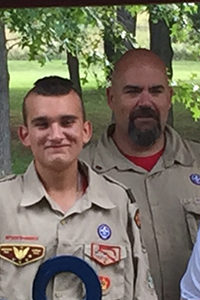 Adam Barnes with his father and Scoutmaster, Jeff.

Jeff Barnes is Scoutmaster for Troop 393, which is Adam’s troop. His brother Zach, 12, is in his first year of Scouting. In a spirit of friendly sibling rivalry, Zach vows to gain his Eagle rank at a younger age than his brother did.

“Heather and I are very proud of the young man Adam has developed into through Scouts,” Jeff Barnes said. “We look forward to watching both boys continue to mature and grow with the program.”

Scout Having a Ball

On Oct. 21, Curtis Smith completed his Eagle project at St. Stephen’s Classical Christian Academy in Eldersburg. Curtis, 14, a member of Troop 719, was a student at the academy when he came up with by the idea for his project: a gaga ball pit.

Gaga ball is a gentler form of dodge ball. It’s played in a fenced-in, octagonal area known as a pit.

Curtis, now a ninth-grader at Western School of Technology, recalled the inspiration for his project.

“I thought of it in seventh grade,” he said. “We used to play gaga in the gym, using folding tables as the pit. One day … someone mentioned how cool it would be to have a gaga pit to play in outside.

Curtis approached the academy’s headmaster with his idea and received his approval. Then the real work began. He started out by pricing supplies and planning fundraisers.

“My project budget was $1,000,” Curtis said. “We raised a thousand with two car washes at Arby’s in Eldersburg — and another thousand on my GoFundMe page.”

The extra money was donated to St. Stephen’s to pay for the installation of a play surface, so the students wouldn’t have to play in the dirt and ruin their school uniforms.

With the support of his mother, Diana Smith, along with an uncle from Virginia, a family friend who flew in from Boston and other adults and friends, Smith and his crew constructed the gaga pit in less than four hours.

“I had more help than expected, so we finished quickly and even had time to play our first game in it,” said Curtis. “Ten people signed up to help but, in the end, 20 showed up. It was amazing! I feel relieved and accomplished.”

His Eagle project completed, Curtis now just has to earn three more merit badges to be eligible for Eagle Scout. He plans to complete all the requirements in the coming months. 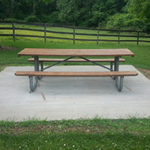 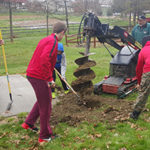 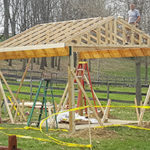 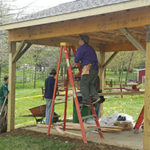 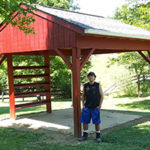 The Boy Scouts of America say their goal is to have its members “prepared for life.” And many parents in Carroll County can affirm that this goal is being achieved. 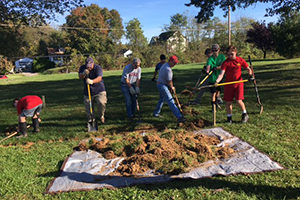 Jodi and Sean Slein of Eldersburg have three sons. The eldest, Michael, 20, is an Eagle Scout and currently a sophomore at West Virginia University. Michael was with Troop 1231 and gained local acclaim when he created the veterans park at Freedom Park in Sykesville for his Eagle project.

“He displays strong leadership skills and is self-sufficient,” said his mom. “He cooks and is very organized. I attribute all these characteristics to his involvement and advancement with Boy Scouts.”

Eldersburg residents Jon and Renee Marsicano have two sons who are active with Troop 716, Joseph and Nico.

“Joseph is a Life Scout [the rank below Eagle] and is already putting together ideas for his Eagle project,” said Renee.

“He went to Philmont [Scout Ranch] this summer and had an amazing experience and, because of that, he plans on doing Northern Tier this summer as well as Sea Gaze, joined by his father.”

Philmont is a 10-day, 80-mile hiking adventure in Cimarron, N.M. Northern Tier is a hiking and canoeing adventure in Canada. Sea Gaze is a weeklong sailboat voyage that focuses on survival skills and seamanship.

Not Just for Boys

In October of this year, a momentous decision was made: The Boy Scouts announced that all BSA programs will be open to girls as of March 2018. Boy Scouts have offered co-ed programs, such as Venturing Crew and Sea Scouts, for over a century. The new ruling, however, will open all Scouting programs to girls.

Reactions to the decision have been mixed.

“Growing up, I knew plenty of girls who were jealous of what we were doing in Boy Scouts, so one side of me gets it,” said Frye, 24. “But the other side of me worries how it will impact the strong spirit of male bonding, camaraderie, and brotherhood of the packs and troops.”

“I support the decision,” he said, “but definitely see the benefits of leaving the decision to the troops individually, so that the opportunity for inclusion exists, but boys, girls and their parents can choose troops accordingly based on their preference.”

Renee Marsicano agrees that offering such opportunities is necessary, but she worries about the impact on the boys.

“I have mixed feelings,” she said. “I worry that it will change the dynamics of the groups and completely change the program. I hope the change is implemented in a sensitive and insightful way.”

For his part, Troop 393 Scoutmaster Jeff Barnes is supportive and says he’ll strive to make the new changes work.

“If that’s what the BSA wants to do, we will do it,” said Barnes. “Boys or girls, I’m here to teach life and survival skills. Boy Scouts has been around over 100 years and has implemented change and overcome adversity before. It’s what we do.”

“Whether it’s men or women,” he said, “I want all kids to have access to the opportunities Boy Scouts provides. We are helping to develop future leaders of the United States, so I’m all for it.” 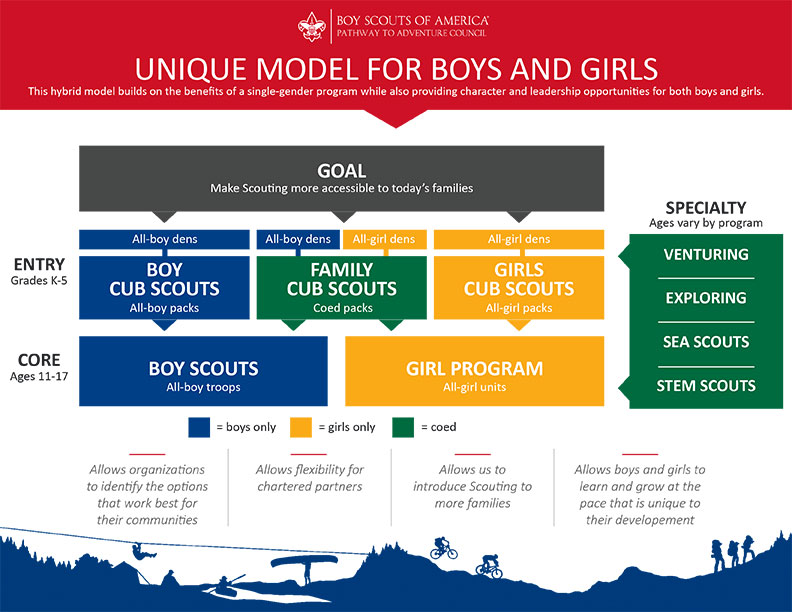 The Pathway to Adventure Council spans two states, serves 23,688 youth members, and includes 8,409 adult volunteers, and four service centers! While Pathway to Adventure Council is new in name, it is rooted in over 100 years of distinguished history, talent and culture. The council helps deliver the best possible Scouting program to youth and young adults in or community to prepare them for life.