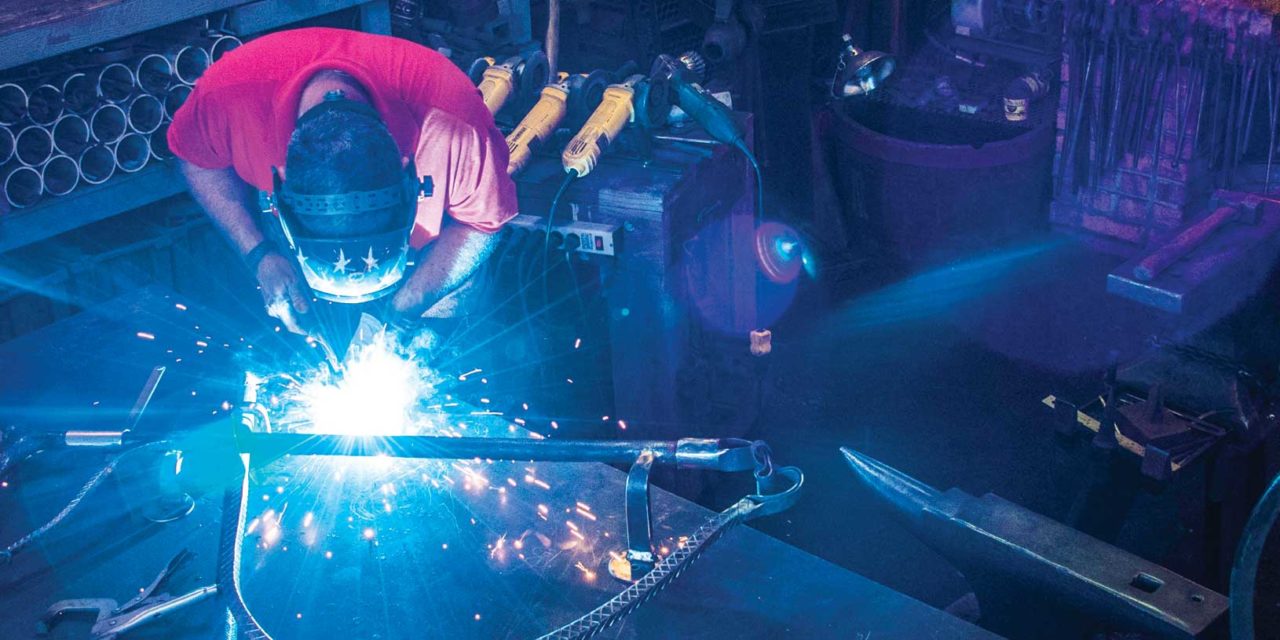 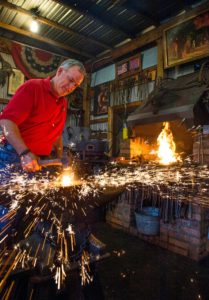 Ken Strosnider makes the sparks fly as he welds a piece of iron in his Detour forge where he creates decorative works of metal. Photo by Phil Grout.

by Jeffrey B. Roth

The poem, “The Village Blacksmith,” by Henry Wadsworth Longfellow, depicts an archetypal smithy “a mighty man is he,/With large and sinewy hands;/And the muscles of his brawny arms/Are strong as iron bands.”

A member of the Blacksmith Guild of Central Maryland, Durkan is an artist who creates metal corsets and other wearable fashions, using the ancient arts of blacksmithing and metalworking. A native of Wilmington, Delaware, the oldest of nine children, Durkan’s art includes a collection of forged fashion attire.

Albin Drzewianowski, an officer of the blacksmith guild, said Durkan, while atypical, is one of a growing number of people lured to the forge by the smell of hot metal and the desire to create items with their own hands.

“The guild was formed in 1986,” Drzewianowski, who has been a member of the organization for 28 years, said. “This is our 30th anniversary. The way I got involved was, I went to the (Carroll County) Farm Museum, and they had blacksmiths there demonstrating, and they mentioned that coil spring makes good woodworking tools.”

At the time, Drzewianowski, 65, had an interest in woodcarving. Chisels, gouges and other good woodcarving tools, especially the ones made in Germany and Switzerland, are very expensive, he said. As a result, he decided to make his own tools. 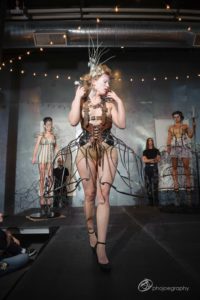 “I joined the guild and I located an anvil,” Drzewianowski said. “Once I had hot steel, I never looked back. My primary interest is working with hot steel. When I started in 1986-87, there were very few blacksmithing tools available. I make a lot of my own tools—punches and chisels. I made my first hammer and I made tongs. Once you have a hammer, anvil and a vice, you can pretty much make any other tools you need.”

Because of the resurgence of interest in blacksmithing, there are more commercial tools available on the market, Drzewianowski said.

A native of Chicopee, Massachusetts, Drzewianowski has lived in the Westminster-area for 30 years. As a member of the guild, he has served in various officer positions and also served as the newsletter editor.

Drzewianowski, who is the secretary and acting coordinator for the Farm Museum’s historic forge, said the public commonly confuses a blacksmith with a farrier. A farrier works with horses and needs blacksmithing training to correctly shoe a horse. While a blacksmith works with iron and may never shoe horses.

“We probably have more computer scientists in our club than farriers,” Drzewianowski, who is retired from the computer industry, said. “We have about a dozen or so women who are blacksmithing, and about a half dozen who never swing a hammer.”

There are very few blacksmith-training programs available. As a result, most people today learn by watching YouTube videos and they read about it in books and on the Internet. The guild has an active blacksmithing school that offers beginner and advanced classes. 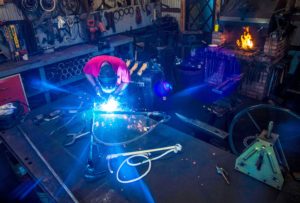 There are also a number of major craft schools, such as the John C. Campbell Folk School, in Brasstown, North Carolina, and the New England School of Metalwork, in Auburn, Maine, which offer blacksmith classes throughout the year. Locally, the farm museum offers classes on Saturdays and Sundays, Drzewianowski, who has taught beginner classes, said.

Detour resident, Ken Strosnider, became a member of the guild in 1997, after his wife, Lora, noticed an advertisement in the local newspaper, about a guild meeting. He attended and has been blacksmithing and learning the trade ever since.

“I was hooked,” Strosnider, a UPS driver, said. “As soon as I saw what the guys were doing—playing with fire and using tools, I thought it was cool. I do custom work, mostly ornamental iron: gates, tables. For my daughter Stefanie’s wedding in three weeks, I made a crown of thorns, with a heart in the middle, that will be a decoration on the table up by the altar.”

Strosnider said it’s the ability to take a piece of metal and turn it into a leaf, a dragon head; whatever that can be imagined, that has kept him working as a smithy.

As do most beginning blacksmiths, Strosnider started by making a small forge from used disc brakes and a vacuum cleaner. In 2000, he built a building to house a brick, coal-fired forge, and the other tools of the trade.

Durkan, who is a 2009 graduate of Towson University, holds an MFA in fine arts and sculpture. She began blacksmithing around 2008 and by 2010, she built her own blacksmith shop and began her business, Iron Maiden Forge. In addition to the MFA, she graduated with an associate degree from Delaware College of Art and Design in 2004 and she graduated with a bachelor degree in fine art from Corcoran College of Art and Design, in 2006.

A part-time adjunct professor who teaches metalworking at various colleges, Durkan has been building a jewelry and wearable metal fashion line. Soon after she built her forge, she needed to find a source of coal and that is when she became a member of the guild.

“Now I’m in the shop everyday,” said Durkan, who worked part-time as a bartender while learning the craft. “When I was in grad school, a friend of mine was doing a show and the theme of the show was wearables. I was making kind of containers for people, but they weren’t wearable in the same sense as the items I make now. Then I wanted to challenge myself and I made wearables for the runway that were movable.”

While her fashion is wearable, Durkan sees her creations as a form of performance art. From corsets and bustiers to metal skirts, Durkan continues to design unique works of art. Every item is separate and can be worn by itself or with other metal wearables, she said.

Drzewianowski  said the guild created metal Flanders Field Poppy flowers for a Belgian World War I Poppy Cenotaph. The sculpture will be unveiled in September at the annual Ypres International Blacksmithing Event, in Ypres, Belgium.

In all, the guild crafted about 80 iron poppies. The Cenotaph will include 2,016 poppies created by blacksmiths from around the world. Some of the blacksmiths with the local guild plan to attend.

Every May, the guild sponsors its Annual Blacksmith Days at the Farm Museum. Throughout the year, there are blacksmith demonstrations at the museum. The guild also participates in other events in the region. Drzewianowski said that anyone interested in learning more about blacksmithing are welcome to attend one of its monthly meetings.