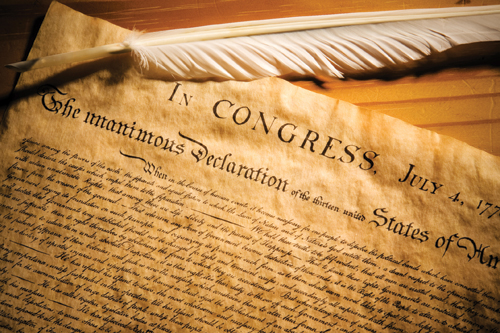 Did you know that:

The Declaration of Independence was not signed on July 4?

The U.S. celebrates the signing of the Declaration of Independence two days too late. On July 2, 1776, the Second Continental Congress, meeting in Philadelphia voted for a Declaration of Independence. In a July 3, 1776, letter to his wife, Abigail, Samuel Adams said: “The Second Day of July 1776, will be the most memorable Epoch in the History of America. I am apt to believe that it will be celebrated, by succeeding Generations, as the great anniversary Festival.”

The written declaration was dated July 4, 1776, after it had been edited and approved, but was not actually signed by anyone until Aug. 2, 1776. John Hancock’s famous signature was the first to be placed on the document.

It was not until November of 1776 that all 56 delegates had signed the document. The July 4 date was the one that printers had affixed to announcements sent out to various parts of the fledgling country. It did not take long before the second of July was forgotten.

Paul Revere did not ride alone?

Patriot Paul Revere’s famous ride, immortalized in Henry Wadsworth Longfellow’s poem, “The Midnight Ride of Paul Revere,” did take place on the night of April 18, 1775, to alert the militia and residents that British troops were advancing, but he did not ride alone, nor did he utter the famous refrain, “The British are coming!” according to Dr. Robert Young, a professor of history at Carroll Community College. “That would make no sense,” he said, “for at the time the colonists were British. He most likely shouted either Ôthe redcoats are coming’ or Ôthe regulars are coming.’” Longfellow wrote the ballad 95 years after the event, in 1860.

In reality, Revere, along with William Dawes and Dr. Samuel Prescott, took separate routes to sound the alarm. Revere never made it to Lexington, Mass., to warn Samuel Adams and John Hancock that they faced arrest if captured by the British. Instead, he was captured by British troops in Concord. He was released from custody a short time later. Prescott rode from Lexington to Concord to sound the alarm. He, too, was detained and interrogated by the British and later freed.

On April 16, two days before the ride, a plan was made to use the steeple of Boston’s Old North Church to alert militia, not Revere, to the impending arrival of British troops. Longfellow accurately noted that the agreed-upon lantern signals would be “one if by land, two if by sea.” The church’s sexton, Robert Newman, climbed the steeple stairs, where he held two lanterns as a signal. Revere, however, was not watching for the signal that night.

Longfellow deliberately changed the facts as a way to promote patriotism and unity among his fellow citizens in the days before the Civil War. The real story of Revere’s ride can be found at the Paul Revere House, now a museum in Boston, where the silversmith lived at the time of his famous ride.

The Liberty Bell’s famous crack was not caused by its ringing at a party of patriots celebrating the Declaration of Independence on July 4, 1776. On that day, the bell was probably silent. Commissioned for use as Philadelphia’s Pennsylvania State House bell, it may have rung on July 8, 1776, along with many other city bells to announce the first public readings of the Declaration, according to the Pennsylvania Historical and Museum Commission in Harrisburg.

In 1751, Isaac Norris, speaker of the General Assembly, and two colleagues, proposed a bell be cast in London, and be inscribed with the words: “Proclaim Liberty thro’ all the Land to all the Inhabitants thereof,” which was taken from the Book of Leviticus. As for that crack: The bell had been poorly cast and cracked soon after its arrival in 1752. The bell was subsequently recast, and recracked, several times, but was intact during the Revolutionary War.

Designed and cast by Thomas Lester, a master founder, the bell was delivered and installed in 1752. Upon its first ring, the bell clapper caused a crack along its brim. The crack ruined the sound of the bell and a decision was made to have it recast by two Philadelphia foundrymen. They changed the date to 1753 and inscribed their names upon the bell. Unfortunately, at a feast celebrating the bell’s return, the public criticized the quality of the sound. The problem: too much copper was used in the mixture. The bell was again recast using tin, and in June 1753, it was again mounted in the bell tower.

Tradition has it that on July 8, 1835, to honor the death of Supreme Court Justice John Marshall, the bell was rung and the famous crack reappeared. It was not rung again until Feb. 23, 1846, to celebrate the birthday of George Washington. Abolitionists were responsible for the name Liberty Bell.

The Boston Tea Party was not a protest over taxes?

The Boston Tea Party has been heralded as “as a groundswell of popular outrage over the tax on tea,” according to Young. Actually, England’s Tea Act granted a monopoly to the East India Company to sell tea in the colonies. By bypassing the middleman, rather than increasing the cost of tea, it would have significantly decreased its price. John Hancock and other merchants owed much of their wealth to smuggling tea. In an effort to arouse public sentiment, they proclaimed that the Tea Act represented “tyranny and high taxes.” Hancock did not participate in dumping tea into the harbor. It was Samuel Adams who led the colonists, disguised as Mohawks, aboard the ship that carried the tea. Profit concerns, not patriotism, was the motivating factor behind the event, said Young.

The Founding Fathers did not want a federal government with very limited power and were not “strict constructionists?”

The Founding Fathers, said Dr. Young, created a republic, not a democracy. They did not intend to grant all adult male citizens the right to vote for president, he said. Instead, they created the Electoral College to prevent a direct, popular vote for President. It was their rationale that only wise, chosen men would have that power. The same thinking was the reason that there was no direct election of U.S. senators until the 20th century.

The notion that the Founding Fathers wanted unregulated capitalism or that they would cringe at the power of the Federal Reserve is another myth, Young said. Faced with a huge federal debt, soon after becoming the first Secretary of the U.S. Treasury, Alexander Hamilton proposed the establishment of a national bank to provide the federal government with the power to control finance and the overall economy. President George Washington supported the proposal, and in 1791, and the Bank of the United States was born. The Federal Reserve system is a more flexible version of the original institution.

The contention that the Founding Fathers wanted the U.S. Constitution to be strictly followed – strict vs. loose construction – is another enduring myth that continues to be debated, said Young. From the start, the majority of the founders, and especially James Madison, recognized that the Constitution needed broad interpretation to keep pace with changes brought about by time or circumstances. Young said that they would be stunned by the current contention that some factions want to apply 1787 philosophies to the solution of 2012 problems and issues.