Powered by the Sun 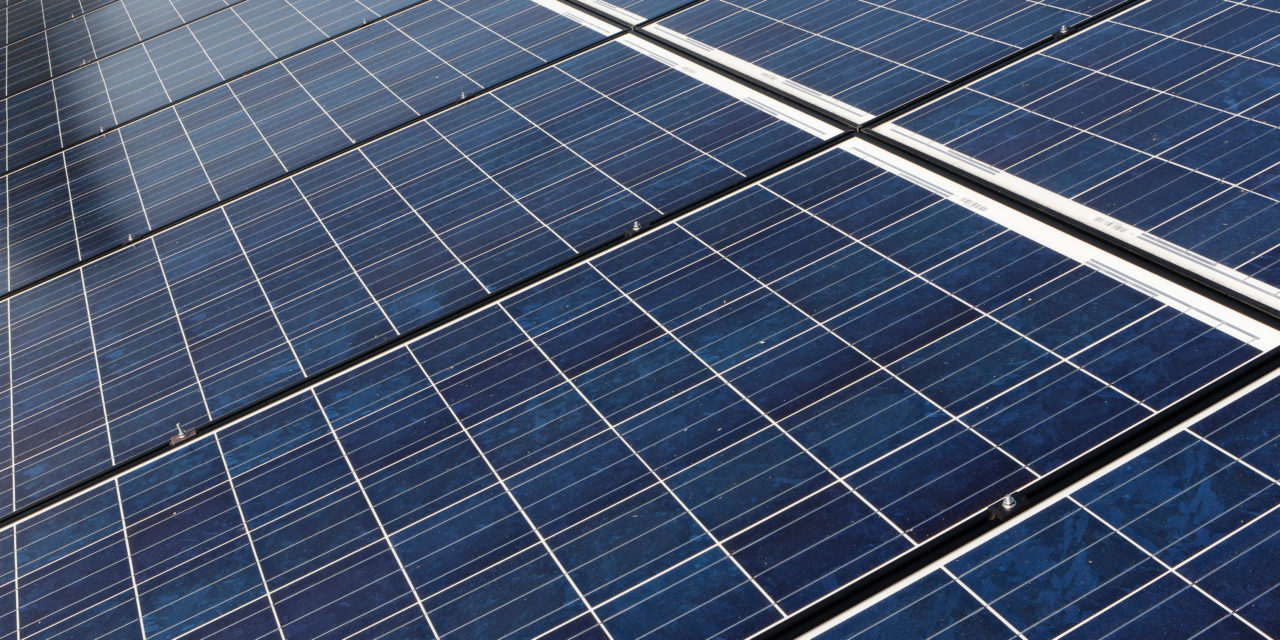 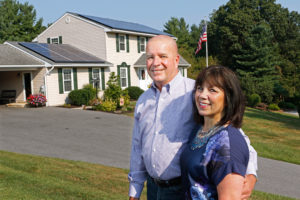 Gary and Maryanne Cofflin recently had solar panels installed on their home in Westminster.

Gary Cofflin and his wife, Maryanne, live in a big house in Westminster – a two-story colonial with an in-law addition and a garage converted into a kitchen that runs 3,300 square feet in size.

When temperatures rose last July and the Cofflins’ monthly electric bill soared to $700, their wallets felt the heat. How did they cool off?

The first full month fueled by solar dropped the Cofflins’ electric bill to $95.

“I signed up thinking I’d save $50, $60 a month [on my bill]. I’ve already saved a lot of money,” said Cofflin, a retired Maryland state trooper who pays a monthly leasing fee of $177 for the system.

The Carroll County Bureau’s Jason Green cites two reasons for the jump. One is the solar industry itself, which has improved its product and offers different installation options and financing mechanisms. The second is state and federal incentives designed to encourage the use of solar.

Among them are a federal tax credit of 30 percent on the cost of the system, due to expire at the end of 2016; a state rebate of $1,000 for installing a solar system; and Renewable Energy Credits (RECs) that public utilities must buy on the energy market in order to meet Maryland’s mandate of 20 percent renewable use by 2020. Carroll County also offers low interest loans for solar.

Cofflin used SolarCity for his system. The national company recently opened an office in northern Baltimore County to better serve the burgeoning demand there and in nearby counties.

Lee Keshishian, vice president of East Coast Regional Operations for SolarCity, said Carroll County has been a great market for the company.

“Housing prices make solar affordable, the county government is easy to deal with and the two utilities that operate there, BGE and Potomac Edison, offer the same scenarios under Maryland statutes,” he said. 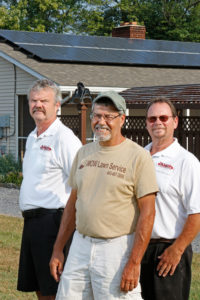 Like 90 percent of SolarCity’s customers, Cofflin chose to lease, not buy, the 74 panels installed on his roof. He may get some tax benefits for using solar, but the RECs belong to SolarCity as the system’s owner.

Steve Ensor, a Westminster homeowner, took a different route to solar. He bought his 20-panel solar system three years ago for $20,000. Besides seeing his average monthly electric bill drop from $150 to $50, he gets six checks a year, from $120 to $155 per check depending on fluctuations in the energy market, for the RECs his system produces.

“I wanted all the economic savings,” Ensor, owner of a lawn care company, said of buying, not leasing, the system.

Tim Kyle, owner of Tim Kyle Electrical Service, a Westminster electrical and solar company that installed Ensor’s system, has been installing solar systems since the late 1980s. Some customers like the “green” aspect – “harvesting the sun,” he calls it. But for most, the appeal is a reduced electric bill, especially with the availability of no money down in some leasing arrangements.

Most residences are amenable to solar, but some situations work better than others. Ideally, the house and/or part of the roof face south and southwest, and it is not shaded by a tree canopy. Also preferable is a roof that is large enough for and can bear the weight of solar panels.

“A big flat roof is best. A roof with angles, with dormers, is more challenging,” Kyle said.

Solar panels can also be mounted on the ground. Most of Kyle’s customers choose roof over ground because of the amount of land needed and the strict county zoning regulations for the latter.

Whether roof or ground, the solar panels are connected to the house’s electrical system. A utility-installed “smart meter,” aka net metering, keeps track of the electricity generated and used.

“Putting solar in a home makes sense in markets where electricity cost is high and you get a lot of sunlight,” said Bramante of the surge in solar in the mid-Atlantic region over the past five years. In Maryland, average residential electricity rates have risen 74 percent in 10 years, 2002 to 2012, according to Direct Energy Solar data.

There are different ways to calculate solar: by number of units, by jobs, by amount of solar capacity installed per state. By the latter measure, the Solar Energy Industries Association lists the top five solar states as California, Arizona, New Jersey, North Carolina and Nevada.

“There is so much demand from home-owners for solar that some utilities have long wait times to connect to the grid,” she said, although that is not a problem in Carroll County.

As for Cofflin of Westminster, he is thrilled with his decision. In fact, thanks to the system, he got a notice that his July electric bill may be zero.

“I’m very happy with the system and with SolarCity’s expertise,” he said.

Carroll County is undertaking a unique solar initiative to power government buildings. The county will install ground-mounted panels to provide solar power to government-owned facilities such as office buildings.

Jeffrey Castonguay, chief of the C

rroll County Bureau of Utilities, said the county is looking to install the panels at four locations, about 50 to 60 acres total, to generate 9 kW hours, out of a total 27 kW hours the county uses.

The project is invoiced at $2.9 million, although the installation cost won’t be known until the final design and location layouts. It is expected to save the county $350,000 per year on its electric bill, according to Castonguay.

Castonguay said state incentives would account for one-third of the project cost. Because of the current federal tax credits, the solar system must be operational by 2016.

“This is part of an overall plan by Carroll County, which is looking to save $8 to $10 million in electricity costs over 20 years,” Castonguay said.