Take a Patriotic Day Trip for the Fourth 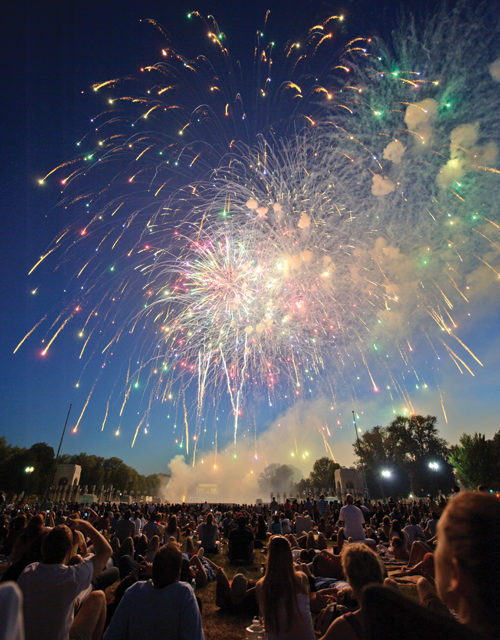 Westminster
If you want to stay close to home, check out the “Old Fashioned July 4th Celebration” at the Carroll County Farm Museum in Westminster. Wagon rides, museum tours, food, crafts, entertainment and “Old Fashioned Games” during the day, with fireworks scheduled for 9:30 p.m. www.carrollcountyfarmmuseum.org Adults, $5; ages 7-18, 60 and over, $3; under 6, free.

Baltimore City
Baltimore’s Independence Day celebrations are impressive. Begin the day at Fort McHenry (nps.gov/fomc), birthplace of the Star-Spangled Banner. Between 12 and 4:30 p.m., there will be period music, musket salutes, cannon firing and games and dances of the early 19th century. The Declaration of Independence will be read aloud at 3 o’clock. After getting misty over seeing the star-spangled banner still waving, grab a bite and situate yourself at any number of vantage points along the Inner Harbor for the fireworks show. Federal Hill commands a spectacular view of the city and the pyrotechnics, beginning at 9:30 p.m. Fort McHenry admission: adults $7; children under 15 free. Driving time from Westminster: Approximately 50 minutes.

Washington. D.C.
Take advantage of your relative proximity to the nation’s capital and the National Mall. The mall is like Times Square on New Year’s Eve: You can watch it on TV, but everybody should do it once. Start with the Independence Day Parade at 11:45 a.m. It marches down Constitution Avenue and 7th Street. You can even volunteer (july4thparade.com). There are special events throughout downtown during the day. The National Archives (archives.gov/dc-metro/Washington) and the White House Visitor Center (www.whitehouse.gov/about/tours-and-events) hold special birthday celebrations all day long. Just remember to grab a spot for the big show: The National Symphony Orchestra performs on the West Lawn of the Capitol Building followed by a spectacular fireworks display. Consider avoiding the crush onto the Mall and watch the fireworks from the Marine Corps Iwo Jima Memorial. The memorial is most easily reached from the Rosslyn Metro Station. Driving time from Westminster: Approximately 1 hour, 30 minutes.

Baltimore County
Nearby is Baltimore County’s Oregon Ridge Park. The Baltimore Symphony Orchestra delivers a wonderful concert on both Saturday the 2nd and Sunday the 3rd, leaving you free to get into the patriotic mood twice before the big day. Concerts begin at 8 p.m., followed by fireworks www.baltimorecountymd.gov/Agencies/recreation/countyparks/oregonridgelodge/, 410.783.4000). Driving time from Westminster: Approximately 40 minutes.

Frederick
Just to the west is Frederick’s annual Independence Day celebration, now approaching its 30th year. Music, a chili cook-off, children’s entertainment and, of course, fireworks,
all taking place in Frederick’s Baker Park. Stroll the old town and check out the museums and wonderful restaurants and shops that have sprung up in the past several years (celebratefrederick.com). Driving time from Westminster: Approximately 45 minutes.

Baltimore City
If an unobstructed view of fireworks is your goal, consider booking a water cruise. Watermark offers Independence Day cruises out of Annapolis and Baltimore. Options include a cruise down the Severn River on July 3rd to take in the Sherwood Forest fireworks display: 7:30-10:30. Adults, $40; ages 3 -11, $20; under 2, free. Or check out the displays in Annapolis or Baltimore on the 4th: 7:30-10:30 p.m. Adults, $45; ages 3-11, $20; under 2, free. (watermarkcruises.com/eventsFireworksCruise or 410.268.7601 x100). Driving time from Westminster to Annapolis: Approximately 1 hour, 15 minutes.

Antietam
You can begin your Independence Day weekend on Saturday July 2nd at Antietam National Battlefield. The sight of the bloodiest battle of the Civil War might seem an odd place for a celebration. But although Antietam is a symbol of how the country was once rent in two, it is now a hallowed site carefully preserving our union’s glorious continuance. A two-hour concert by the Maryland Symphony Orchestra begins at 7:30 p.m., followed by fireworks (nps.gov/ancm/index.htm).
Driving time from Westminster: Approximately 1 hour, 20 minutes.

Lititz, Pennsylvania
Northeast of Carroll County is the Amish country of Lancaster, Pennsylvania. Locals claim that the country’s very first Independence Day celebration took place in Lititz. That is difficult to verify, but what is without dispute is that the first July 4th celebration in Lititz took place in 1811 and the town has been doing it continuously every year since 1818. Of course, fireworks did not complement the earliest celebrations. But the same feelings of patriotism, camaraderie, and the welcome one gets from celebrating in a small town are still alive and well in Lititz Springs Park. All-day festivities and entertainment, including a baby parade (yes, you read that correctly), a Queen of the Candles pageant, and the ever-popular 7,000-candle illumination precede the fireworks. (www.lititzspringspark.org). Driving time from Westminster: Approximately 1 hour, 30 minutes.

Mount Vernon
Searching for a Founding Father connection? Head to George Washington’s home in Mount Vernon, Virginia. Military reenactments, wreathlaying and a cameo from George and Martha Washington top the bill. Have little kids and want to be home before midnight? No problem. The pyrotechnics at Mt. Vernon are “smoke fireworks,” set off in red, white, and blue during daylight over the Potomac. Adults, $15; ages 6-11, $7; under 5, free. 8 a.m.-5 p.m. (www.mountvernon.org) Driving time from Westminster: Approximately 1, hour 45 minutes.

Citizenship Ceremonies at Monticello and Annapolis
For an unforgettable 4th, witness as immigrants officially become American citizens at Monticello, Thomas Jefferson’s home in Charlottesville, Virginia. The ceremony begins at 9 a.m. and its distance from Carroll County requires a very early start. But it is one you will not soon forget; July 4th also happens to be the 185th anniversary of Jefferson’s death (monticello.org/site/visit/july-4th-monticello). Adults, $10; seniors and ages 6-12, $9; under 5, free.
For a naturalization service closer to home, the William Paca House and Garden in Annapolis conducts a ceremony at 9:30 a.m., with a family celebration between 10 a.m. and 2 p.m. Paca was an original signer of the Declaration of Independence. Home and garden tours, music, and reenactments complete the patriotic scene. Kids even get the opportunity to sign a Declaration of Independence replica with a quill pen (annapolis.org/index.asp?pageid=49). Driving time from Westminster to Monticello: Approximately 3 hours 30 minutes.