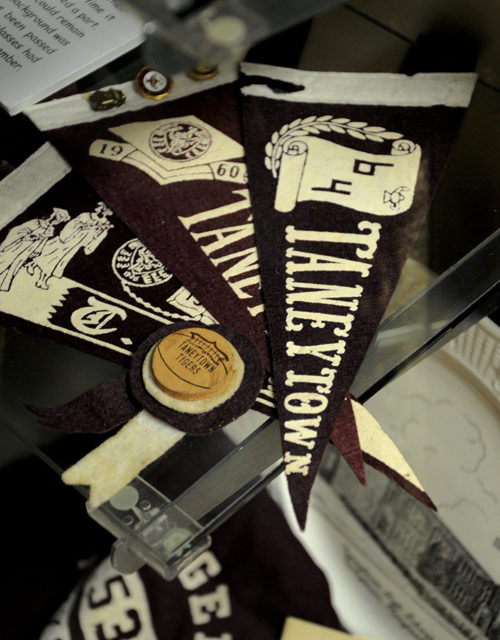 Banners from the original Taneytown High School are on display at the Taneytown History Museum.

Taneytown is known for its Civil War connections, the Antrim 1844 Country House Hotel, and of course, the town’s designer and 18th Century namesake, Raphael Taney.

George Washington slept there on his way to Philadelphia in 1791 and General George Meade set up headquarters there before the battle of Gettysburg.

But now the town fathers hope to be known also for the Taneytown History Museum, which its promoters proudly refer to “as good, if not better, than the Smithsonian.”

Located in the town’s old Taneytown Bank and Trust building at 24 East Baltimore Street, it is packed with artifacts that date back to the 1700s.

Proposed by George Naylor and the late George Crouse (founder of the Crouse Ford dealership), the museum was opened on August 15, 2004, to honor the town’s bicentennial. The Victorian building was built in 1877.

Visitors to the museum can see the bank’s old vault doors and portions of original carpeting from the long-vanished financial institution.

Museum Committee Chairman Doug Heck is one of the many volunteers who proudly points out the authenticated Mason-Dixon Line stones on exhibit in the foyer of the museum.

Heck, also vice president of Taneytown’s Chamber of Commerce, was approached by Crouse and Naylor to oversee the museum’s swift organization.

“We knew there were artifacts in Taneytown that go back 250 years,” said Heck. Among the diverse treasures found in the museum are city map renderings, vintage advertising and Revolutionary War, Civil War and Native American artifacts. The museum also spotlights cultural and industrial contributions, such as old pharmaceuticals, canned goods, tall clocks, publications and ladder back chairs.

“Our challenge when we got the museum started in January of 2004 was that it needed to be open with artifacts and everything ready to go by August 15,” said Heck. “We had to work our tails off, but I think we’ve done a nice job. We have some neat stuff.”

Concurrent with the museum’s hallmark displays is its support of the local arts scene. Regional photographers, painters, sculptors and jewelers have showcased their works at the Taneytown History Museum, as well as acclaimed artists such as Clifton and LaVerne Zepp, John W. Taylor and Joe Wantz.

This year, from September 10 to October 15, a special exhibit will feature the works of photographer Michael Smith, world-renowned carver and sculptor Ernie Muehlmatt, plus Libby Cain, a local painter.

The Taneytown History Museum is aided by more than 60 volunteers, comprised of local residents and members of the city’s Chamber of Commerce and Heritage Committee. The museum is funded by donations and contributions from volunteers. It also stages fundraising events, including an annual Holiday of Trees decorating contest and raffle.

Recently, the Taneytown History Museum has been open only sporadically as a result of ongoing street construction. But, said Heck, “This museum needs to be a destination and focal point for Taneytown. “We want it to be a source for people.”