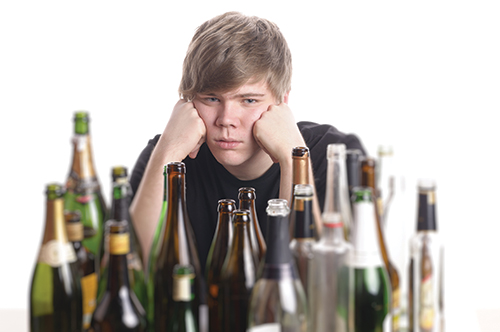 It’s a Friday night and the teens in your house are antsy. They are nearing their senior year. The parties are beckoning, and where there is a party, there is often alcohol.

Your mind starts to race through all the poor choices teens can make when inhibitions and judgment are impaired by alcohol: increased sexual activity, driving or getting in the car with someone who has been drinking.

“Maybe it wouldn’t hurt to let them have a couple beers where they can be monitored,” you think, “where they are safe.” Or, “If they are going to be drinking anyway, why not let them do it where an adult is making sure that some of those poor teen decisions don’t come into play?”

For the past five years, the Carroll County Coalition Against Underage Drinking has partnered with local businesses and law enforcement to drive this message home to teens, to parents and to establishments selling alcohol: Drinking under 21 is against the law and so is providing alcohol to minors. But more than that, experts say, consuming alcohol during adolescence can affect the brain in life-altering ways.

“All in all, we want people to be safe. There is a legal drinking age and parents should not be providing alcohol to kids and their friends,” said Carol Mullen, coordinator of the Carroll County Coalition Against Underage Drinking.

Mullen, who works for the Carroll County Health Department, said a federal initiative to decrease underage drinking some years ago resulted in grant funds being made available to states and eventually individual counties to build underage drinking prevention programs. Carroll County applied for and got such a grant in 2010. Although the five-year grant will end in June, Mullen said that the groundwork has been laid, and the coalition will continue to do its work with funding from other outlets.

A 2013 Maryland Youth Risk Behavior Survey shows that Carroll County may be worse off than other counties in the state when it comes to underage drinking. Although the survey suggests that Carroll fares better when it comes to how early youth are having their first drink — while 19.3 percent of the survey takers across Maryland said they had their first drink before the age of 13, that number is 16.8 percent for Carroll County — it found that 35 percent of the youth survey takers in Carroll County had at least one drink in the previous 30 days (31.3 percent for the state), and 21.4 percent of them said they had five or more drinks in a row in the previous 30 days (17 percent for the state).

“I don’t think we’re any different than other jurisdictions that have kids drinking,” DeWees said. “But I don’t know if the emphasis has been on enforcement locally the way it should be.”

DeWees, who was with the Maryland State Police for 20 years before being elected sheriff, said his staff is addressing underage drinking on several fronts.

In addition to sobriety checkpoints on local roads and responding to information left on a county tip line, DeWees said deputies are monitoring social media to track parties where underage drinking might occur, targeting underage drinking at school events, and dedicating deputies to prom patrols throughout the spring.

“We have to play a part in educating,” DeWees said. “But at some point the enforcement component has to come in and we have to get our point across.”
DeWees said the zero-tolerance policy also applies to adults providing alcohol to minors.

“This is not just about underaged kids; it’s not just juveniles,” he said. “It’s also parents, and holding them responsible for allowing their kids to drink. In most cases they get alcohol from their own refrigerators.”

Mullen said the coalition is focused on education and preventing the problems that come with underage drinking.

Retail availability was deemed an area of focus for the group early on, and over the past five years the coalition has spearheaded projects that include increasing the number of compliance checks to ensure that retailers are not selling to minors and offering affordable Techniques of Alcohol Training courses for employees who work at stores and restaurants where alcohol is sold. The coalition also provides under-21 signage and tool kits to alcohol retailers.

“We researched what alcohol retailers needed to be better equipped, and it’s resulted in a successful campaign,” Mullen said. “The number of [retailers who sell to minors] are down and we’ve trained close to 140 employees who work at local retailers and restaurants, and that’s a good thing.”

The coalition worked with Carroll County public schools and health teachers to create messages about the physical and mental effects of drinking on the still-maturing adolescent brain. According to the National Institutes of Health (NIH), people who begin drinking before age 15 are four times more likely to develop alcohol dependence than those who have their first drink at age 20 or older.

In addition, drinking during adolescence, when the brain is still developing, can cause subtle learning impairments that affect academic and workplace performance.

“Alcohol marketing is very sophisticated towards our youth — using social media, TV and print advertisements,” Mullen said. “And, unlike the tobacco industry, who is talking about the dangers of smoking, the alcohol industry doesn’t do that, and if anything, they are promoting underage drinking.”

In addition to educating retailers and teens, the coalition is targeting parents as well with campaigns like “Don’t Be a Friend. Be a Parent.”

A parent survey conducted by the coalition in the fall of 2014 revealed that although 89 percent of the respondents knew there was a “social host” law in Maryland, 47 percent of them did not know the consequences of the law or did not answer the question. Knowingly and willingly providing alcohol to minors, even in your own home, can result in a fine of up to $2,500 on the first offense.

The survey also revealed that 19 percent of the respondents said they don’t know when to start talking about drinking with their kids, and 23 percent said they are afraid their kids will see them as hypocrites because they drink.

Sykesville residents Keith and Jennie Rogers married almost two years ago, blending their families, so that now their household includes kids aged 7, 9, 11, 14 and 16. With two teenagers in the house, Jennie said they are very much aware of the temptation for kids to experiment with alcohol.

Acknowledging that they can’t be on top of their teens every minute of every day, and that they do keep alcohol in the house for adult consumption, Jennie said they have gotten creative in trying to limit the kid’s access to alcohol.

“We lock our pantry now to avoid any temptation, as our house is constantly full of kids,” Jennie said. “We even snap pictures of our beer fridge before we go out to see if we can detect any changes.

“It’s hyper-vigilant, but it’s our job.”

Reporting Underage Drinking
Carol Mullen said the Carroll County underage drinking tip line, launched in June 2013, is a work in progress. The phone line goes directly to the sheriff’s office and is monitored by the duty officer 24 hours a day, seven days a week. People are encouraged to call the line to report underage drinking or parties where they expect underage drinking to take place.

Callers can also give details about a retailer or person selling or providing alcohol to minors. Mullen said the caller can remain anonymous and the calls aren’t traced. Police investigate all complaints. Since the line was established, Mullen said there have been 40 incidents — calls that led to police being dispatched to investigate.

“In our parent survey, people generally said they would call the tips line, although of course there are some who say they wouldn’t want to rat out a neighbor, and we understand that.”
Tips can be left at 443-547-1509 or emailed to tipsline.ccsao@ccg.carr.org.