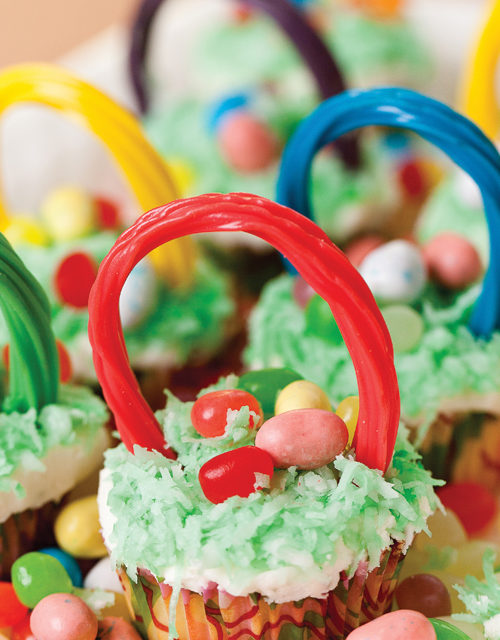 Chocolate bunnies and yellow marshmallow chicks probably come to mind when you think about the Easter holiday. But there is much more to Easter foods than sugary candies. Entertaining for Easter involves bringing the colors and flavors of spring to the table.

Many cooks insist that the only meat to serve at Easter is ham. Although opinions differ when it comes to baking ham, I prefer the old-fashioned, bone-in baked version.

Eggs are another matter. They often appear on Easter Sunday in deviled, hard-cooked or dyed-color form, but I have used them as part of an unusual filling in twice-baked potatoes.

As for side dishes, the asparagus, leek and dill tart is a sophisticated but simple one, combining flaky puff pastry with tender spring asparagus.

2. While the ham bakes, prepare the brown-sugar glaze. In a medium saucepan, combine 1 ? cups red wine or port, light-brown and dark-brown sugars and mint sprigs. Bring mixture to a boil. Reduce heat. Boil gently, uncovered, about 30 minutes, or until mixture is reduced to 1 cup. Remove mixture from heat, discard mint sprigs and set aside.

3. Remove ham from oven; let cool for 20 to 30 minutes. Using a sharp knife or kitchen shears, trim away rind. Trim fat to a ?-inch to ?-inch layer. Place ham bottom side down. Score top of ham by making diagonal cuts, about ? inch to ? inch into fat, in a diamond pattern. Place a whole clove at intersection of each diamond.

4. Brush ham with some of the brown-sugar glaze. Return ham to oven; bake for 30 minutes to 1 hour more or until thermometer registers 140 degrees F., brushing every 15 minutes with glaze. Sprinkle ham with black pepper. Remove ham from oven and let stand 15 minutes before carving.

5. Cut a thick slice from the roundest side of the ham, creating a flat base. Stand ham on the cut side. Slice straight down until you hit the bone. In one motion, run knife horizontally along top of the bone; cut down again in ?-inch intervals. Remove ham slices to a serving platter. Garnish with green tops of scallions and leeks. Makes at least 10 servings.

1. Preheat oven to 400 degrees F. Prick potatoes several times with a fork or paring knife. Place the potatoes in a shallow baking pan. Bake potatoes, uncovered, until tender, about 1 hour and 30 minutes. Remove from oven; cool slightly. Cut potatoes in half crosswise and cut a thin crosswise slice off both ends of each baked potato. Using a spoon or a melon baller, remove the flesh from the potatoes; transfer the flesh to a medium bowl. Reserve the potato skins. Mash the potato flesh and set aside.

3. In the bowl of a food processor, pure the ricotta until smooth. Mix ricotta into the mashed potatoes along with the sour cream or yogurt, mustard, salt, pepper and 1 tablespoon chives. Gently fold in chopped eggs. Fill the potato skins with the cheese-and-potato mixture, mounding the tops slightly. Transfer filled potatoes to a 2-quart rectangular or square baking dish. Bake, uncovered, for about 15 minutes or until the potatoes are heated through.

1. Preheat oven to 400 degrees F. Line a baking sheet with a piece of parchment paper and set aside.

2. On a lightly floured surface, roll out the sheet of puff pastry into a rectangle measuring 14-by-10 inches. Trim off irregular shaped edges with a pastry cutter or a sharp knife. Transfer the pastry to a baking sheet. Place pastry in freezer to firm up, about 15 minutes.

3. Remove pastry from freezer and brush the surface of the pastry (except the edges) with the egg wash. Use a sharp knife to lightly mark a ?-inch border around the pastry (be careful not to cut all the way through the pastry). Using a fork, pierce the dough inside the marked rectangle at ?-inch intervals. Bake until the pastry is golden, about 15 to 17 minutes.

4. Remove pastry shell from oven and sprinkle with Swiss cheese. Scatter sliced leeks over cheese. Cut bottoms off ends of asparagus spears so that they fit into the pastry shell. Arrange asparagus spears crosswise in a single layer inside pastry shell, alternating the directions of the tips and ends. Drizzle olive oil and sprinkle chopped dill over asparagus. Season with salt and pepper. Return tart to oven and bake for 22 to 24 minutes, or until asparagus is tender. Makes one 14-by-10-inch tart.

2. In a medium mixing bowl, sift together the flour, baking powder and salt. Set aside.

3. In the bowl of an electric mixer fitted with the paddle attachment, cream butter and sugar on medium speed until the mixture is light and fluffy, about 3 to 5 minutes. Add eggs, one at a time, beating well after each addition. Beat in vanilla extract and grated lemon zest.

5. Divide cupcake batter evenly among liners, filling each liner about two-thirds full. Bake until the tops are golden brown and the tops spring back when touched, about 20 to 25 minutes, rotating pan once during baking. Transfer cupcake pans to wire rack. Cool cupcakes completely.

6. Spread buttercream icing over the tops of the cooled cupcakes. Combine water, food coloring and coconut in a large resealable plastic bag. Seal bag and shake to tint coconut. Spread coconut over tops of cupcakes.

7. Using the point of a bamboo skewer, make a hole on opposite sides of the tops of each cupcake. Insert the ends of each fruit-flavored candy twist into the holes created on the tops of the cupcakes. Decorate tops of cupcakes with jelly beans and malted-milk eggs. Makes 1 dozen cupcakes.

1. In the bowl of an electric mixer fitted with the paddle attachment, beat 3 cups of the confectioners’ sugar, butter, vegetable shortening, 4 tablespoons milk and the vanilla extract until smooth, about 3 to 5 minutes.

2. Scrape down the sides of the bowl with a rubber spatula. Add the remaining confectioners’ sugar; beat until light and fluffy, about 3 to 5 minutes. Add the remaining milk, 1 tablespoon at a time, to the mixture, as needed, to achieve a good spreading consistency. Makes 3 ? cups, enough for about 2 dozen cupcakes.