Beth Puleo: The Unique Life of One Benefits Many 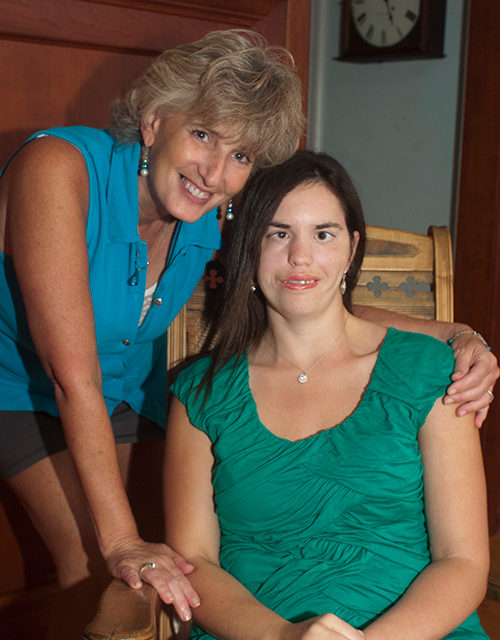 Beth Puleo is not content with her autobiography, Game Changer, published in 2010, so she is rewriting it.

It’s not enough to have an undergraduate degree from Mt. St. Mary’s University, so she’s enrolling in graduate school.

And, she’s not fulfilled by staying at home, so she’s volunteering for Habitat for Humanity of Carroll County while pursuing employment.

The same “there’s-got-to-be-more” drive fueled her success in securing a $60,000 grant for iPads for St. John Catholic School in Westminster.

The word never is not part of Beth’s vocabulary, despite the fact that a lifetime of serious health problems continue to raise hurdles for her that most people would deem insurmountable.

The persistent, motivated and determined young woman even amazes her own mother.

“I’m always so impressed with her, that she’s not willing to give up,” said Charlene Lesniak of her 25-year-old daughter. “She’s not ever complacent with anything.”

Both were given just two years to live.

A second surgery removed another tumor, but six weeks later, it returned. Because it wrapped itself around other organs and rested on the brain stem, a third procedure was not possible.

The only option was radiation therapy. Charlene can still hear her daughter’s screams as the custom-made mask, designed to keep her head completely still, was screwed into the operating table. The radiation destroyed the cancer, but also left her with severe physical, speech and occupational disabilities.

At the same time, Frank was deteriorating, losing his ability to function on his own. By the time Beth was 11, her father had died.

“I knew how much he wanted me to live and prove everyone wrong. His death only fueled my desire to live,” she states in Game Changer.

Beth’s fight for her life, despite her own grim prognosis, includes relearning how to walk when she was 8, countless physical, occupational and speech therapy appointments, gymnastics to keep her limbs in shape and additional surgery to restore facial movement lost through radiation.

Her journey also includes Make-a-Wish Foundation trips with her family to Walt Disney World and Magic Kingdom between surgeries. And her journey includes a myriad of accomplishments in and beyond classrooms.

Beth enrolled at St. John in second grade (Charlene still teaches there), and after completing eighth grade, she attended Delone Catholic High School in McSherrystown, Pa. She enrolled at Carroll Community College and then Mt. St. Mary’s University, where she lived independently in the dorms. She had a scooter to help her get to classes and to her jobs – writing for the local Emmitsburg News Journal and interning with the school’s sports information department.

It wasn’t until St. John Principal Harriann Walker suggested her for the grant proposal last fall that she thought at all about pursuing a career in grant writing. Without a full-time development director, Walker needed help with the proposal. She knew Beth had graduated from college and knew she needed experience to pursue employment.

“To get a job you have to have experience, and to get experience you have to get a job,” she said. “It’s like the dog chasing its tail.” Learning, she said, does not end for St. John students after they graduate.

Beth quickly became a “valued member of the team,” Walker said, and provided the foundation for the proposal, helping to interpret input from others.

“She was the cornerstone of everything; she put the words together without losing the true message,” Walker said. “She did a wonderful job the first time doing anything like this. I think this is her calling.”

While working on the grant, Beth contacted Marcia Hoffman, senior grants analyst for the Carroll County Department of Management and Budget, for some editing help. Hoffman encouraged her to enroll in her grant writing class through Carroll Community College.

“She was extremely attentive, always sat in the front row, always completed her assignments and I was really impressed with her writing skills,” said Hoffman. “She was an A+ student and I’m very proud of her. We don’t give grades in continuing education but I would give her an A+.”

Today, seated in the kitchen at her family home in Westminster, Beth appears like an average 20-something woman with long brown hair and a muscular build. She speaks with a slight speech impediment as words requiring her lips to touch lack complete formation, and she admits she sounds a little nasal. She balks about her form and is working with therapists to improve her gait.

Although her brothers Frank and Tony are married and live away from home, they are always there for her, Beth said.

Beth is busy searching for a job, readying for graduate classes and looking for a publisher for her book revision as well as a coloring book she’s created for children fighting cancer. She’s also securing bookings locally as a motivational speaker.

She said she has learned a great deal from her experiences. Determination and the drive to see and do more, she added, is best described by a quote she carries with her at all times: “Do not let what you cannot do interfere with what you can do.” – UCLA basketball coach John Wooden