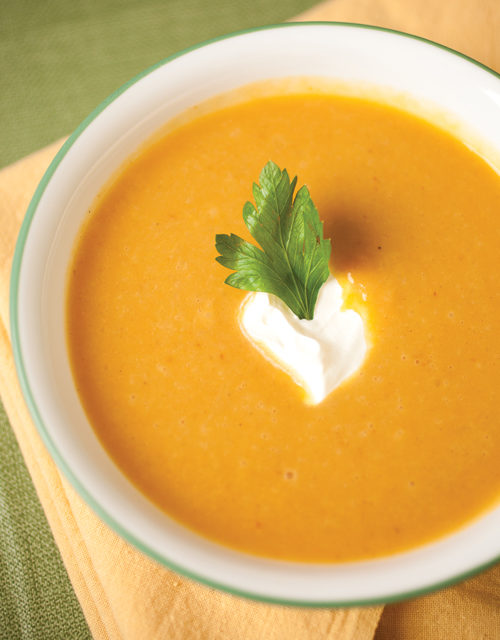 Pumpkins have been cultivated in North America for thousands of years. The protein-packed, oil-rich seeds were probably the part of the fruit that was most attractive to the prehistoric growers of this colorful squash.

When European settlers arrived in North America, Native Americans introduced them to this valuable member of the gourd family, which, in the form of pumpkin pie, quickly became a part of the Thanksgiving tradition.

But there is no reason for pumpkins to be reserved only for pies. That is why we incorporated pumpkin into the soup, salad, main course and dessert of this seasonal menu.

In keeping with the holiday custom of giving thanks for the bounty of the season, we have made use of the major parts of the pumpkin: Its flesh and seeds. Canned pumpkin pure is the foundation for the pumpkin soup, pumpkin lasagna and pumpkin flan, the latter a variation on the traditional pumpkin pie. Finally, the pumpkin seed salad calls for hulled pumpkin seeds, or pepitas, which are toasted to enhance their flavor and sprinkled into the greens.

As all-American as the pumpkin itself, this recipe uses canned pumpkin pure to add texture and flavor to a hearty autumnal soup.

1. Wrap basil sprigs, cinnamon stick, cloves, peppercorns, coriander and red pepper flakes in a piece of cheesecloth and tie it into a sachet with kitchen twine. Set aside.
2. Heat butter in a large saucepan over medium heat. Add leeks and onion; cook until soft, about 25 minutes.
3. Add apple, if using. Cover and cook over medium heat for 10 minutes. Add cheesecloth sachet, chicken broth, salt and pepper. Bring to a boil. Reduce heat to low. Simmer for 15 minutes.
4. Remove sachet and discard. In the bowl of a blender or food processor, pure soup mixture in several batches. Process soup until no large pieces of vegetable remain in the mixture. Press soup through a sieve into a large mixing bowl and discard any remaining solids.
5. Return pured soup to saucepan. Add pumpkin pure, milk and heavy cream. Bring soup just to a simmer over medium heat. Adjust for seasoning. Serve topped with a dollop of sour cream and a sprig of parsley, if desired. Serves 6.

Sauces thickened by nuts and seeds have been prominent in Mexican cooking since pre-Columbian times. Pumpkin seeds, known as pepitas in Mexico, are wonderful sprinkled whole over greens.

1. Heat 1 tablespoon olive oil in a skillet over medium heat. Place onion rounds in skillet; season with salt and pepper. Cook until tender, about 4 to 5 minutes per side. Transfer onion rings to a plate; set aside.
2. In another medium skillet over medium heat, heat 1 tablespoon oil. Add pumpkin seeds and cook, stirring constantly, until golden brown, about 5 minutes. Take care that seeds do not burn. Remove skillet from heat and set aside to cool.
3. In a small bowl, whisk together remaining 6 tablespoons olive oil, lemon juice and a pinch of salt and pepper; set aside.
4. Fill a large bowl with ice and water; set aside. Bring a medium stockpot of water to a boil. Add green beans; cook just until tender, about 2 minutes. Drain. Plunge green beans in ice water. Remove beans from ice water, pat dry with a kitchen towel and set aside.
5. When ready to serve, combine both lettuces and onion in a large bowl. Pour reserved vinaigrette over the top. Add green beans and toss to combine. Sprinkle with reserved pumpkin seeds. Serves 8 to 10.

In this hybrid dessert, pumpkin pie, a favorite preparation of the Puritans in Colonial America, meets flan, often called the national dessert of Spain.

1. Set out four 6-ounce ceramic or glass custard cups. Fill a large bowl halfway full with ice-water and place it near the stove. (This cold-water bath will prevent caramel from becoming overcooked.) Combine ?/? cup sugar and ?/? cup cool water in a small, heavy-bottomed saucepan over medium-high heat. Cook, moving saucepan in a circular motion occasionally, to allow sugar to dissolve. When sugar begins to melt, reduce heat to medium-low and continue to cook, swirling the pan occasionally, until sugar forms a deep golden syrup in the bottom of the pan (about 330 to 340 degrees F. on a candy thermometer). Don’t stir sugar at this point; stirring will only encourage sugar to crystallize in the pan. Quickly plunge bottom of the pan into the bowl of ice-water to cool caramel slightly, then remove pan from bowl.
2. Immediately pour caramel among custard cups. Holding cups with a kitchen towel, carefully tilt cups to evenly coat bottoms of cups with syrup. Set aside.
3. Preheat oven to 325 degrees F. In a large mixing bowl, stir together remaining ?/? cup sugar, eggs, pumpkin pure, evaporated milk, cinnamon, ginger, cloves, nutmeg, orange zest and vanilla extract. Divide mixture evenly among custard cups. Transfer custard cups to a 2-quart square baking dish.
4. Place baking dish on center rack in the oven. Pour very hot water into bottom of baking dish so that water reaches about halfway up sides of the custard cups. Loosely cover tops of custard cups with a sheet of aluminum foil (do not fold or crimp foil over tops of custard cups). Bake for 55 to 60 minutes, or until a thin-blade knife inserted in the centers of the flans comes out clean. Remove custard cups from the baking dish and pat bottoms dry with a kitchen towel. Allow flans to cool slightly on a wire rack. Cover flans and place in refrigerator to chill until set, about 4 to 24 hours.
5. To serve, loosen edges of flans with a knife, slipping the point of the knife down the sides to let in air. Invert a dessert plate over each flan; turn custard cup and plate over together. The flans should fall onto plates with caramel surrounding the flan. Scrape as much warm caramel as possible from custard cups over tops of the flans. Garnish with whipped cream and cinnamon sticks, if desired. Serves 4.