Carnivals Are Almost As Important As Water For Fighting Fires 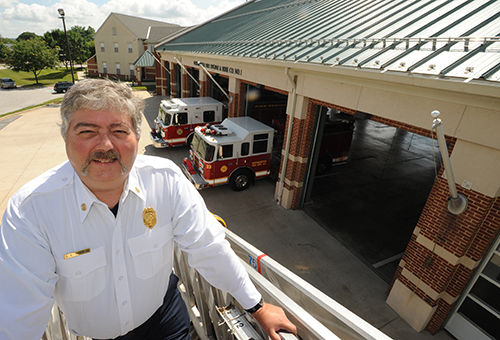 George Bangerd III, Westminster fire chief, manages a 35,000-square-foot facility and a crew of 164. It is one of the largest of Carroll County’s 14 companies.

George Bangerd III doesn’t like to dwell on the stories. And no wonder. These are his friends and neighbors. But after 34 years as a volunteer firefighter in the Westminster company – the last two as fire chief – he has had his share of horrific experiences.

There was the plumber who toppled into a deep well. A firefighter, lowered by harness-and-rope apparatus, plucked him out of the muck. In a house fire, a fireman fell through a burning floor and was dragged to safety by another firefighter, who received a medal of valor for the rescue.

Not all situations end successfully. Bangerd still shudders at the memory of one 911 call about a house fire: “You could hear the fire on the recording, it was so intense,” In that instance, the caller was rescued, but badly burned.

Bangerd, an amiable man with graying hair and a stocky physique, sits in his office in the Westminster Fire Engine & House Company No. 1. Posters of fire engines decorate the walls; toy ladder trucks line the windowsill. Located a block off Main Street, the historic company, founded in 1823, occupies a handsome two-story red-brick building.

Freshly washed cherry-red and screaming-yellow fire engines, ladder trucks, ambulances and rescue vehicles gleam in the 14 bays. The air smells, not unpleasantly, of a mixture of oil, gas and wax. And yes, there is a brass firepole from the second-floor sleeping quarters to the engine bay.

With a 35,000 square-foot facility and a crew of 164, Westminster is one of the largest of Carroll County’s fire departments’ 14 companies. All the companies are volunteer (unusual for the Baltimore-Washington, D.C. region where professional – or “career,” the preferred term in volunteer circles – companies predominate.)

The all-volunteer arrangement hearkens to an earlier era when the county was more rural and less populated. Although similar arrangements can still be found around the country – particularly in scarcely-populated areas – Carroll County’s companies face the twin challenges of funding and recruiting.

The Carroll County Volunteer Emergency Services Association oversees the companies, each of which is organized as a private, non-profit organization. CCVESA sets standards and procedures and, based on their budgets and call volumes, distributes the Carroll County Commissioners’ $11 million annual allocation to the fire companies.

Because a single fire engine costs up to $1 million, not to mention capital expenses for mortgages and maintenance of their buildings, the allocation does not cover the fire companies’ budgets. Neal Roop, CCVESA administrative assistant and a long-time volunteer firefighter himself, estimates that the allocation covers only 70 to 80 percent of most companies’ budgets.

Tom Coe, chief of New Windsor Fire and Hose Company No. 1, cites a different figure. He says that the county allocation accounts for less than half of his budget. New Windsor needs to clear $60,000 from its major fundraiser, an annual carnival, to make up the difference.

New Windsor is not alone. “None of the fire companies could function without fundraising,” said Coe, citing the Halloween events, carnivals, sportsman nights, bingos, raffles, cash drawings, suppers and social hall rentals that are a constant in station life.

The fire companies adhere to rigorous, state-wide standards. An entry-level firefighter needs 108 hours of training; an EMT (emergency medical technician) certification, 165 hours. The companies are proud of these standards.

But it does create a dilemma. “Our biggest challenge is recruitment and retention” of volunteers, said Coe, who runs the New Windsor company with 100 volunteers, half of whom are “responders.” The rest support the company’s fundraisers and administration.

Bangerd puts it another way. “I always wanted to be a firefighter,” he said. “The problem is, a lot of people have the [same] desire but don’t realize the time commitment. The days of hopping on a fire truck to fight a fire without training are gone.”

The situation is not unique to Carroll County, despite a long tradition of family involvement and a close-knit culture of friendship and camaraderie. Fire companies nationwide are seeing a drop in volunteers, said Bangerd, who, besides the training standards, cites job commitments, commuting time and the cost of housing.

Parts of the county have become “bedroom communities,” he said. “People work in Baltimore and D.C. They leave early and they come home late.”

As a result, all of the county’s fire departments supplement their volunteers with paid staff, often firefighters and EMT personnel from career stations in adjacent counties. Of Bangerd’s 164-member Westminster company, for example, 120 are volunteers, of which 30 are “responders,” and 44 are paid staff.

Other companies are known for their fire-fighting equipment, for tankers to transport water, or for rescue squads to extricate people from traffic accidents and train derailments.

“It isn’t cost-effective for everyone to have all [the specialized equipment and teams]. Fire companies assist other departments,” said Coe, whose HAZMAT team “travels all over the county” when needed.

Of the county’s 14 companies, the Pleasant Valley Fire Co. covers the largest geographic area, about 10 square miles of mainly farmland. The roads are rutted, three to four houses share common driveways, and water is scarce.

“Snow is a challenge because of the roads,” said Stephen Wantz, president of the Pleasant Valley company and immediate past president of CCVESA. “We have a 3,000-gallon water tanker because there are very few hydrants and we can’t rely on ponds and streams.”

Wantz’s family has been volunteering at Pleasant Valley for five generations, starting with his great-great-grandfather. The company has 200 volunteers, 60 of whom are “responders,” and 23 paid staff.

But with the decline in volunteers and the increase in population and emergency calls, the situation has to change. To that end, he said, CCVESA has begun a long-range plan to assess and address the financial needs of the companies.

Wantz also talks about a $4 million allocation from the county to build a state-of-the art educational facility in Westminster, as well as a partnership with the county Board of Education to offer certifications in basic firefighting and emergency medical services for high school seniors.

“The plans are recruitment tools, to get volunteers,” he said. “Otherwise, we have trying times ahead of us in Carroll County.”