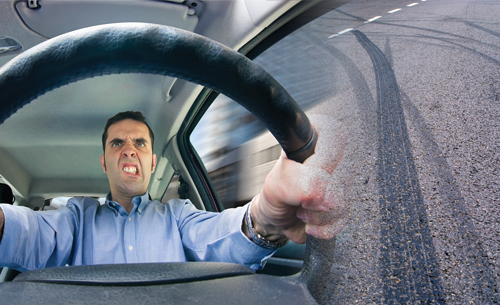 It had started simply, with a car slowing down on a Manchester road to make a left turn, and a truck passing on the right. It could have ended violently.

It had started simply, with a car slowing down on a Manchester road to make a left turn, and a truck passing on the right. It could have ended violently.

A person in the car allegedly threw a bottle at the truck. According to The Carroll County Times, the truck’s driver then followed the car (he told police he was trying to get its license plate number) all the way to a home a few miles away, where, he said, he found a woman standing outside — with a rifle.

The newspaper called the event a case of road rage, one of a few noteworthy cases in recent years. Although local police say road rage in Carroll County is rather rare, experts say that what often begins with aggressive driving can snowball into an even more dangerous situation.

“A single action by a driver, such as cutting off another driver, driving slowly in the left lane, tailgating and gesturing can unfortunately enrage another motorist to the point where it can trigger a disproportionate and potentially violent reaction,” said Christine Sarames Delise, a spokeswoman for AAA Mid-Atlantic. “Road rage is uncontrolled anger that results in violence or threats on the road. Road rage is the most extreme form of aggressive driving.”

Driving has become a contest in which people are trying to get to their respective destinations in the shortest possible time, she said. That can lead to some troublesome behavior, including tailgating, unsafe lane changes, not yielding the right of way to others, speeding, and barreling through red lights and stop signs.

“A lot of people mistake aggressive driving for road rage,” said First Sgt. Daniel Everett, assistant commander of the Maryland State Police’s Westminster barracks. “Where it becomes road rage is when there’s some kind of contact, where it’s taken to the next level: assault, malicious destruction of property; where someone gets out and starts kicking someone else’s vehicle. It will almost always typically stem from aggressive driving, unless there’s some other kind of dispute.”

Road rage incidents are rare in Carroll County, he said, amounting to only “a handful” of incidents a year. A few incidents of late were notable enough to garner media attention:

In February 2011, a motorcyclist said he had responded to an illegally passing van south of Hampstead with a pair of obscene gestures, only to have the driver allegedly retort with a pointed handgun, according to The Carroll County Times. Prosecutors dropped criminal charges against the man, according to online court records.

In June 2011, a man was arrested after allegedly yelling and pulling a handgun on people in another vehicle north of Westminster, the newspaper reported. He received probation before judgment on one count of second-degree assault and was found not guilty on one count of first-degree assault; 11 other charges were dropped, according to online court records.

And the woman from this past March’s alleged rifle-pointing case received probation before judgment on one count of second-degree assault, according to online court records. A reckless endangerment charge was dropped.

Everett strongly cautioned people not to respond to another driver who is behaving aggressively.

“The best way to defuse these situations is to try your best not to get involved to begin with,” he said. “If somebody gives you an obscene gesture and is tailgating and beeping at you, just call the police. And if you ever are a victim [of road rage], definitely call the police and let us come out and handle it.”

AAA Mid-Atlantic’s Delise suggested avoiding eye contact with someone who is making gestures, and never pull off to the side of the road to try to settle things. It is better to leave as much distance between your vehicle and the other person’s, she said, and either to contact police or drive to a public place where people are around — not your home — in case the other person is following you.

Road rage can result from “the combination of two very volatile elements: anonymity and stress,” according to P.M. Forni, a professor at Johns Hopkins University and the author of Choosing Civility: The Twenty-Five Rules of Considerate Conduct and two other books on the subject of civility.

Even behaviors related to aggressive driving alone, without escalating to road rage, are dangerous — and commonplace. A study conducted by AAA showed that nearly 31 percent of all fatal motor vehicle crashes between 2003 and 2007 were caused by speeding, and more than 11 percent involved a driver who did not yield the right of way.

Meanwhile, many drivers not involved in fatal wrecks said they had nevertheless committed “potentially aggressive acts” while driving, with 58 percent admitting to speeding up through a yellow light, 41 percent honking their horns at others, 26 percent pressuring others to drive faster, 22 percent tailgating, and 6 percent purposely going through red lights.

Between 2003 and 2007, “a total of 119,475 people were killed in crashes involving potentially aggressive actions,” the study found.

“Be a cautious and courteous driver,” said Delise. “Signal every time you merge or change lanes, and whenever you turn. Use your horn rarely, if ever. If you and another driver see a parking space at the same time, let that person have it. And if another driver seems eager to get in front of you, say ÔBe my guest.’

“When you respond this way, after a while ÔBe my guest’ becomes your automatic response — and you won’t be as offended by other drivers’ rudeness.”