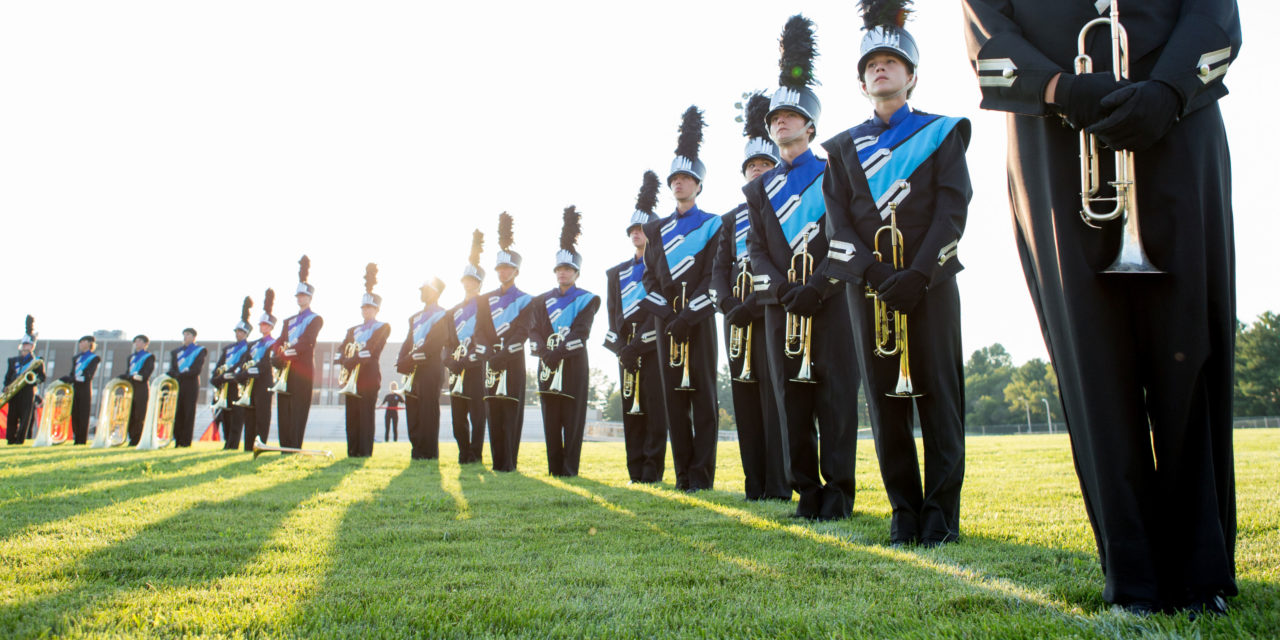 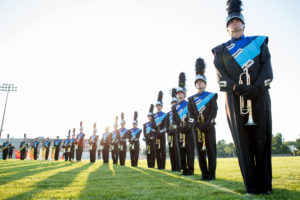 Band members carry heavy equipment and wear cumbersome uniforms, wave huge flags and manipulate props. Each second of an eight-minute competition requires complete concentration; one misstep during the carefully choreographed show could throw the entire performance off kilter, like one tipped domino that tumbles an entire set.

Carroll County’s high school marching band programs have a reputation for quality and ingenuity. Entrenched in tradition, several of the high school programs are amassing awards and accolades for their creativity and excellence. Competitions take students to destinations far beyond local fields and local parades: Hawaii, Georgia and New Jersey to name a few.

Marching band is a way of life for many participating students. They are driven by the high expectations people have of them, the tightknit family atmosphere that develops among peers and instructors, and the thrill of dynamic performances.

“I’m motivated by the whole aspect of performing and putting on a show that is completely original and has never been done before,” said Liberty High School senior and drum major Kaylin O’Hern. “It’s cool to be a part of a group of people doing something unique.

“We are all a family; we get really close. It’s hard to leave that once you experience it,” O’Hern said.

Hollywood continually unfolds the stereotypical nerdy band member. But in reality, in order to succeed in a marching band, one has to be smart, driven and capable of keeping up with a very busy schedule.

Liberty High School Band Director Brandi Jason said she is looking for students who are “driven and motivated, not someone settling for instant gratification.”

“You’d think being a musician would be high on my list, but truth be told, I’d take someone who has no band experience but is driven,” she said.

“A common misconception is that band is good for non-athletes. You cannot be a couch potato because you won’t survive camp,” she said. “I’m looking for someone who is in for the long haul and committed to the family. They have to be committed to our schedule and family atmosphere.” 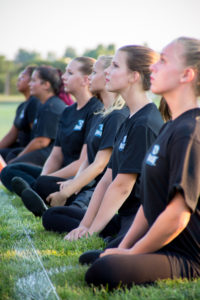 Each school is a little different based on its competition schedule and training programs. Westminster High School marching band members practice for four days in June, four days in July and then two weeks in August. And we’re talking practices that go from 9 a.m. to 9 p.m. Once school begins, there are practices three or four nights a week and all day Saturday. Added into that are the competitions that typically mean leaving before the sun comes up, traveling, competing and returning home long after the sun has set.

Liberty High School senior tuba player Trevor Hiltz said there’s a lot of excitement and adrenaline and nervousness before a performance, but then once they start their routine that all goes away.

“We’re so focused on performing that by the time it’s over, while we are tired, we know that we marched a good show and we’re proud of our performance,” Hiltz said.

For Westminster High School sophomore Husam AlZubaidy, it’s the high standard of excellence he’s working to achieve and the legacy he’s representing that he finds so enticing about marching band.

“I think one of my favorite things is being in that uniform and out in public when we’re getting ready to head into a stadium for a show,” AlZubaidy said. “In that uniform I feel very composed. Having it on means I’m representing the standard that previous people held before me, my job is to uphold that standard and, if not, then to raise the bar.”

Band members also share a tremendous sense of family, according to several of the band directors. The family includes the parent boosters who work so hard to raise money for and support their musicians, as well as the band teachers, volunteer coaches and even alumni.

“They keep coming back because of our family atmosphere. For me to do what I ask the kids to do with their time and commitment to excellence, they keep coming back because they know they’re loved,” Jason said of Liberty’s band parents and students. “Even though we might not be a huge band, my parent boosters bust their butts to give my kids the best equipment and support. All of that is a huge appeal to them. We try to work really hard because the kids are putting in their time.”

Competition is the primary driver for many of Carroll County’s marching bands. They play at football games and in community events, but for these bands, the focus is competing. This year Westminster’s marching band will travel to Georgia for a competition (which is nothing compared to the trip they took to Hawaii several years ago to perform in the Pearl Harbor Day Parade) and several local bands will travel to compete in nationals in New Jersey in November.

The band season begins with an idea that turns into a story line that the band directors and choreographers must then build into a show, with music, instruments, props, movement, costumes and dancers. This year Liberty’s marching band is exploring “what if the yellow brick road wasn’t yellow. The Westminster High School marching band is diving into Greek Mythology with a performance about Medusa. The competition shows are typically around eight minutes long. 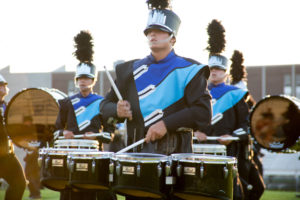 “They have this story they get to tell and they’re each communicating different parts of it, but it becomes this cohesive thing that they get to show to thousands of people and travel with it and get better with their instruments, and grow together,” Jones said.

Last year South Carroll High School fielded a marching band for the first time in 10 years. According to band director John Stevenson, the program collapsed a decade ago due to several factors. It has taken him years to gain enough momentum, raise the needed funds and engage enough students to actually restart the marching band program. This year, with a marching band of 37 students, Johnson said they plan to play at football games, at some community events and in one competition.

One of the primary challenges has been getting students interested in marching band, an activity they haven’t been exposed to for a decade.

“These students never had an experience with a marching band, it’s a completely new thing for them,” Stevenson said. “Most of these students already had an identity, by identity they saw themselves as a volleyball kid or someone in robotics, so this was one more thing to add into a schedule, to sell them on.” 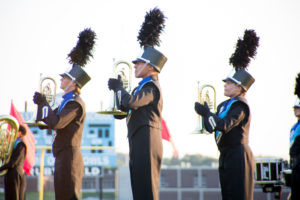 But as the program builds momentum and more students see the benefits of belonging to the band family, the social aspects, the sense of accomplishment, Stevenson said more students are starting to show an interest.

“I’m seeing a lot of student buy-in, student ownership, that I think is contributing to the overall growth of the instrumental music program,” Johnson said.

“Marching band is just the easiest visual for everyone because we go out and do stuff all the time,” Jones said. “But I have kids in orchestra who are here for four years, they just don’t get the same exposure as marching band.”

For all the work that students, band teachers and parents put in to make a marching band viable, much less successful, it does have its downfalls.

For 17-year-old Hiltz of Liberty High School, the hardest part of band is when the season is over and he has to wait another year to start again.