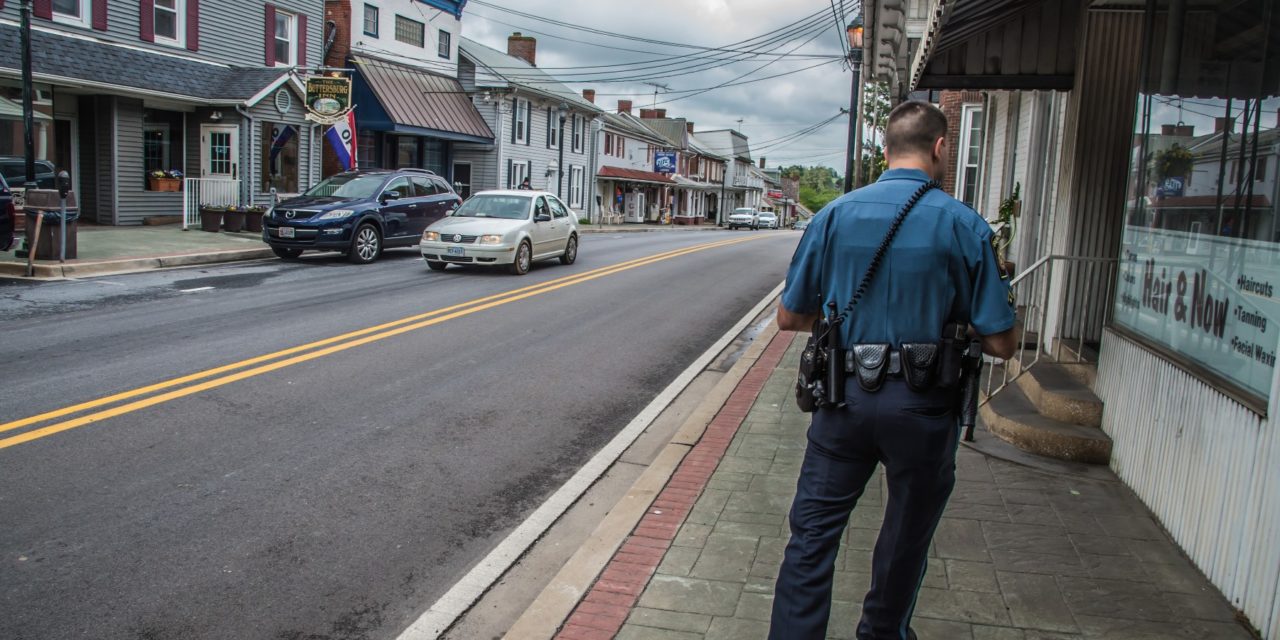 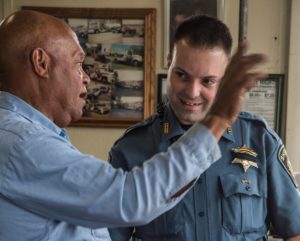 Reminiscent of Mayberry in the Andy Griffith Show, policing was once more personal – it relied on building relationships and being invested in all aspects of a community’s well-being.

Sheriff Andy Griffith and his sidekick Barney Fife policed the streets of the sleepy town of Mayberry, North Carolina by being a part of the town, they knew everyone and everyone knew them.

It was community policing in a way that many wouldn’t recognize today.

Unfortunately, today’s landscape is different – technology, social media, politics and some bad apples have fostered a sense of tension and distrust between police organizations and citizens in many parts of the country.

But the quiet town of Union Bridge, with its historical sites and a Main Street that boasts businesses that have been there for decades, has found its version of Andy Griffith in Sheriff’s Deputy Brian Colussy. Colussy has embraced this small town and in turn, this small town has embraced Colussy.

Dealing with economic challenges and facing a drug epidemic like so many other towns, some in Union Bridge say they feel like the town has been left behind as surrounding areas thrive. But that is beginning to change as Deputy Colussy works to make the community safer, cleaner and healthier. 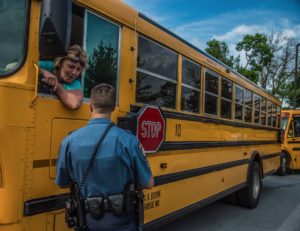 Deputy Colussy checks in with bus driver Patti Boone before school lets out.

Colussy said he always wanted to be a police officer but that he originally took a different path. His first go in the professional world was as a chef. He earned a degree in culinary arts and worked at a hotel on the Eastern Shore. He said after some time in the industry he just wasn’t “feeling it” anymore.

A ride along with a state trooper was the game changer. He said after that, he made the decision to give up his spatula for a badge.

Colussy went through the necessary training and has been with the Carroll County Sheriff’s Department for six years. Three of those years he has spent working to improve life for the citizens and business owners of Union Bridge.

“I grew up in a small, one-cop town in Western Pennsylvania,” Colussy said. “Union Bridge reminds me of that and it needs a little more help than other areas because it doesn’t have its own police representation.”

“A lot of people looked at Union Bridge as the armpit of Carroll County, and that made me think it can be better than what it is,” Colussy said.

Union Bridge is not a high crime area but it does see its share of “quality of life crimes” such as domestic altercations, drugs, bar fights and nuisance calls, Colussy said.

But according to Sheriff Jim DeWees, Colussy is working to address crime by building relationships and educating people, not by just making arrests.

This past spring a local retail store was robbed and Colussy said he arrived on scene and was able to apprehend the suspect. In addition to going through standard police protocols for the situation, Colussy went a step further.

He spent some time talking to the suspect and came to understand that the crime was drug related. Colussy talked to the suspect about local resources to help him overcome his drug addiction and encouraged him to get help, offering to help in any way he could.

“I’m here to help, I’m here to serve and protect,” Colussy said. “I don’t care who it is, that is for everyone. If a criminal needs help in some way, I’m here to provide those services.” 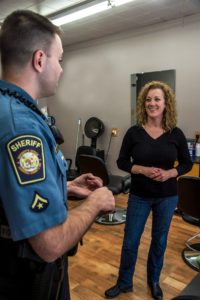 Amy Kalin has been a Union Bridge resident and business owner for 22 years. She is the owner of Hair and Now on Main Street, and has also served on the town council for 12 years. She said she’s amazed by Colussy’s commitment to the local youth.

“He is a positive role model and mentor to many of these kids, some don’t really have functioning parents,” Kalin said. “He holds them accountable but also makes them feel safe and protected. He lets them know they matter and that is a huge deal.”

Supporting youths is critical to the overall success of the community, Colussy said, and sometimes that means employing “rough justice”. After a graffiti incident at the park two years ago, Colussy said he identified the kids involved and he had the youths clean and repaint the graffittied pavillion. He smiled saying it has remained in pristine condition ever since.

Similarly, he made youths who egged a house spend a day scrubbing the egg off the house, helping them to realize the impact of their actions.

“I get out and walk the streets. I can be seen in town throughout the day and night,” Colussy said. “I talk to business owners and citizens and I build relationships with the schools. They voice opinions and I listen. I take what people have to say and learn what the issues are and try to find solutions.”

For his continued efforts in community policing, Colussy was recently recognized by the Carroll County Sheriff’s Department as the 2016 Deputy of the Year.

Brian [Colussy] is the most community-oriented police officer I’ve ever met,” Sheriff DeWees said. “He’s come up with some very innovative plans to get everyone involved in making sure the town stays vibrant, productive and safe.” 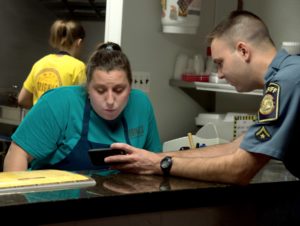 Drug abuse awareness is important to Deputy Colussy. He shows Erica Monteleone of Originals Pizza a photograph of the latest abused substances causing the nationwide epidemic.

Colussy was recognized specifically during the deputy of the year ceremony for several initiatives he’s undertaken including creating and implementing a “business alert system” to improve communication of important information throughout the town, working to make the Annual Union Bridge Drug Expo a success, collaborating with the Department of Juvenile Services to create programs to clean up the town, and working with local businesses, schools and the VFW to obtain bike helmets for local kids who needed them.

Colussy, who is not married and said his only “kids” are of the four legged sort, acknowledged that investing in the community the way he has makes the job more emotionally challenging on a personal level. He said that it is difficult when he’s built a relationship with someone and he’s invested in their well-being in one way or another, and that person dies or makes the wrong decisions.

But he said it’s part of the job and he sees far more good in Union Bridge than bad.

Colussy said every town has its problems but he’s quick to point out that this particular small town has many people invested in its success. He said he works alongside many committed business owners and residents to make the town better every day. 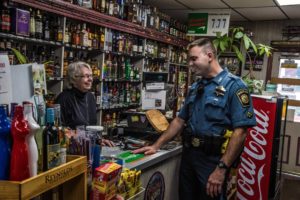 Deputy Colussy checks in on Kathy Kreimer, owner of the Esquire Liquor store.

Colussy does not live in Union Bridge, his home is in the Southern part of Carroll County. That said, he can often be found in Union Bridge on his days off – enjoying a community outing or following up on a work project. He has given life to community policing here and similar to Andy Griffith in Mayberry – Colussy is an invaluable piece of this small town.