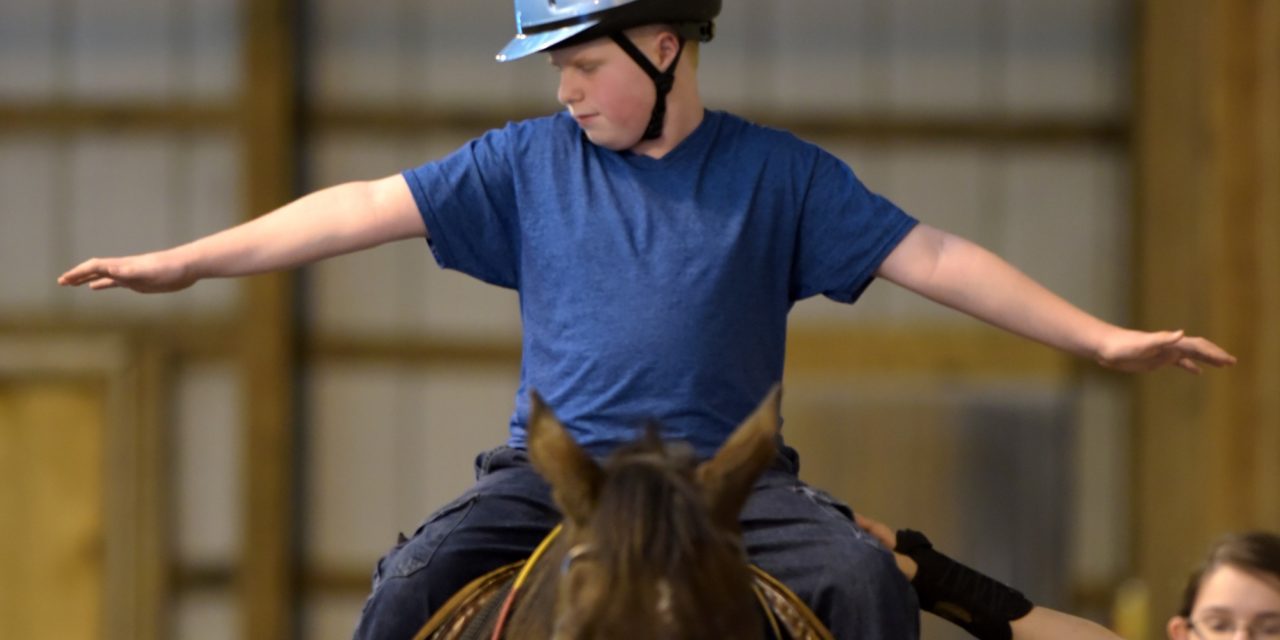 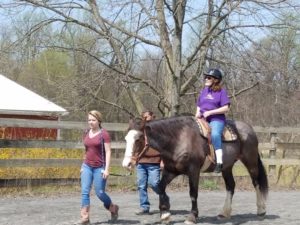 Four years ago, Judy Hayes sat in a wheelchair and needed assistance with activities of daily living. When she went to visit a farm about equine therapy, she was pushed up a ramp to meet the horse. Today, however, she drives herself to a farm, parks the car, walks up a ramp, and mounts a horse unassisted.

“I had mixed emotions,” she says of her first day at the farm. “I was kind of down and here’s somebody still standing. I realized this could be me. I knew I had to try.”

Hayes credits Robin Korotki, a Level 2 therapist providing hippotherapy through a program called Tuff Luv, which uses horses as therapeutic treatment tools for adults and children with emotional, physical, neurological and psychological maladies, including multiple sclerosis (MS), autism and cerebral palsy, as well as children with developmental delays. After six years in Hampstead, Tuff Luv operates at JD Farms and Kennel in Westminster. It is one of several equine therapy programs in the county.

According to the American Hippotherapy Association, hippo (the Greek word for horse) therapy refers to how occupational therapy, physical therapy, and speech-language pathology professionals use equine movement to engage sensory, neuromotor, and cognitive systems to help individuals achieve functionality.

One benefit is the movement of the horse itself, says Susan Withnell, president of the 4H Therapeutic Riding Program of Carroll County, which runs at the Carroll County Agriculture Center for riders with disabilities who are medically cleared to participate. Because the horse is in constant fluid motion in different directions, riders use their core muscles to stay mounted and develop strength, stability, and balance as well as muscles in other areas of the body, like arms and legs.

The highly-trained horses serve as treatment tools, much like exercise balls, swings or balance beams, notes Korotki, referring to the 60-minute individual equine therapy sessions she provides for 10-15 patients each week. 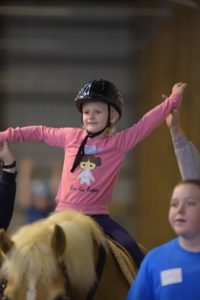 After mounting, as the patient walks the horse, he or she is directed by the therapist and side walkers, who help on each side of the animal. As the horse moves, the patient’s body reacts. Exercises could consist of arm raises, arm circles, toe touches, directed reaching, and activities using balls. Patients accommodate based on the horse’s movements, leaning to the right, shifting their hips. This teaches the brain how to react.

“It’s all to improve body awareness,” says Korotki. “A lot of these people have no idea what straightens because they’ve had to accommodate to their weak muscles.”

The sessions also help with cognitive awareness. During the sessions at the Ag center, Withnell instructs riders to move the horses to letters or in accordance with directions (left, right, back, forth). Not only do they work on balance and core body strength, they get the soothing benefit of motion and, for children, learn to spell.

Oftentimes, riders come to sessions with conditions like Down syndrome or autism that compromise language development. Because communication centers around the horse, they respond better than they might in a school setting. Withnell asks questions about the horse, where they want to go, and how they want to do something.

Withnell supervises the volunteer-led sessions that run for eight weeks in the fall and 10 weeks in the spring for a minimal fee. Six classes each week serve five riders each, with the groups organized by age and riding ability. These sessions feature classes that direct specific tasks like removing a ring from a post and taking it to another post or walking the horse in a figure eight or over a bridge. They also direct the horse to different letters to spell difficult words to improve their cognitive functioning.

The goal is to always work on language, body, riding skills and stopping and turning the horse, Withnell says.

Korotki learned to ride horses in order to train to be a hippotherapy provider.

“I was looking for something to make patients feel better,” says Korotki, who operates a traditional physical therapy practice in Lutherville. She also provides aquatic therapy to patients, including Hayes. Hippotherapy is a tool that allows her to match the horse to the patient’s weakness.

“It wakes up muscle memory,” says Korotki, noting that 90 percent of her patients are out of their wheelchairs following therapy.

Often, Korotki sees a response after the first session. Patients seem looser, sit or stand straighter, and have more energy.

Therapy continues for years for many. They develop relationships with the horses, who stop and glare when their riders don’t sit properly. If patients stop attending therapy, they can regress.

“It’s an emotional lift especially for people in wheelchairs,” says Korotki, who has served patients through Tuff Luv since 1991. “They are now a rider, not a patient, and they have four good legs.”

The patient’s view of the world changes in many instances. Instead of looking at people’s backsides, they are now the tallest on the farm. They see tops of heads and all around them with unobstructed views.

“It’s rewarding to give people back their lives,” Korotki adds, “and seeing the impact you make on their quality of life.”

Withnell has seen riders progress during her 12 years with the program. One young adult gained a great deal of self-confidence after starting out scared and nonverbal. Now, the individual is willing to try more tricks, is not afraid to fall and participates in shows.

Seeing their expressions, being silly in the ring with them, and developing a strong rapport with the riders brings Withnell and others back to volunteer regularly.

“Many volunteers find the therapy is not just for the riders,” she says. “They get so much out of it.”

Therapeutic riding can produce small, incremental advances in communication and movement, and over time significant changes may occur.

“Therapeutic riding is very controlled,” says Marya Pecukonis, Region 2 (Maryland) chair of the Professional Association of Therapeutic Horsemanship International (PATH), which credentials centers and instructors. “The goal is to eventually get the individual to be as independent as possible in whatever way they can.”

She’s seen individuals with autism with no language skills connect with a horse in ways they never have with people. Their social skills ultimately improve and they grow to ride independently.

“They can’t form a sentence, but they are able to control a 1,000-pound animal.” 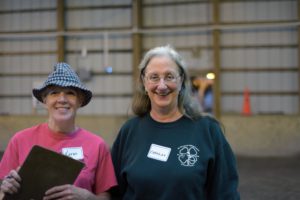 Individuals can work for years in schools and therapy to understand the basic concepts of under, over and beside. But put them in a ring with a horse, and the concepts are understood week by week, says Pecukonis, who provides therapy services to an average of 25 families a week at LeCheval Stable in Howard County.

Other programs involve equine facilitated learning, which provide experiences with animals that are nonjudgmental and give affection unconditionally. The programs also offer opportunities for physical and emotional growth and may not involve riding, says Teresa Perrera, director and equine specialist with Calm Acres at Meadow Creek Farm in Hampstead. This includes helping clients strengthen muscles through grooming, barn chores and general work around and interaction with the horses.

“Horses promote confidence and self-esteem while motivating people with a disability to interact and get stronger,” Perrera says. “For individuals with a disability, companionship (both with their horse and with other participants) is particularly invaluable, as they may struggle to make friends with peers their own age because of low self-esteem.”

Equine-assisted sessions also provide psychological benefits through spending time outdoors, breathing in fresh air, hearing the birds and interacting with nature as well as with the horse, Perrera adds.

“Horses are nonjudgmental… They bring no prejudices to the process,” noting the boost in self-esteem that results from controlling a 1,500-pound living animal when they are challenged controlling their own minds and bodies.

Hayes, who received an MS diagnosis at age 38 following years of uncertainty, initially set out to combat the disease on her own.

“At that time, there was no medicine to give me,” she says, reflecting on her experience in August 1989. “I started running three miles every day. I didn’t know what else to do.”

Gradually, the disease overtook her body. With MS, communication between the brain and the body is compromised when the body’s immune system attacks the central nervous system. This can cause a variety of symptoms in varying degrees of severity, including vision loss, pain, fatigue, and impaired coordination.

After 10 years, Hayes underwent surgery, and she was able to work an office job until 2007. A foot drop left her struggling to walk as it would catch on the ground and, with her weakened left side she was rendered unable to lift it enough to walk normally. It became harder and harder for her to walk or to stand for lengths of time.

That’s when her neurologist recommended hippotherapy to increase her mobility – and Korotki was in her area.

Some insurances cover the therapy sessions, which proves helpful to Hayes.

“If I didn’t have it, I would find the money,” says Hayes. “It’s that important.”