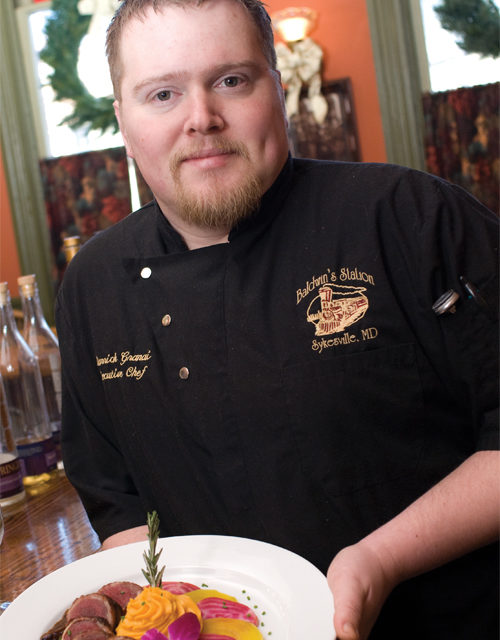 Bringing people together around the dinner table to enjoy fine food and great company is a comforting way to pass the evenings of late winter and early spring.

Here they are, along with their bona fides:

After training at Ecole de Cuisine LaVarenne in Paris in 1983, Gettier worked in restaurants in Paris and Italy. Before arriving at Antrim 1844, Gettier owned two restaurants in the Baltimore area: The Orchard Inn in Towson and M. Gettier in Fells Point. He also served as Executive Chef at The Conservatory at the Peabody Court Hotel in Mount Vernon.

Gettier was named one of the Leading Hotel Chefs in America in 1990 by the James Beard Society.

After cutting his teeth in the food business at Wright’s Catering in Derby, Vermont, and Hoagie’s Pizza and Pasta in Newport, Vermont, when he was 15 years old, Granai began formal training in the culinary arts.

He has had the opportunity to work for several accomplished chefs, including Executive Chef Eric Yeager, formerly of Baldwin’s Station. Although Maryland may be miles away from the small town of Newport, Vermont, where Granai was raised, his New England upbringing continues to inspire him.

“Throughout all of my years in this business,” he said, “I have felt that the best food is food that is prepared fresh, using indigenous ingredients, with passion and a simplistic approach,”

Executive Chef Dean Winning has enjoyed more than 20 years experience in kitchens throughout Maryland, Washington, D.C. and Virginia. He was graduated from the Culinary Institute of America, in Hyde Park, New York and apprenticed under the artful eye of Marcel Desaulniers at The Trellis Restaurant in Williamsburg, Virginia.

Winning has been featured in several national publications, including Food and Wine, The Metropolitan Home, Esquire and Bon Apptit.

Head Chef John Mandato has been cooking professionally since 2000. During that time, he has had the opportunity to work in various Baltimore-area kitchens such as Pikesville’s Bonnie View Country Club and the Hilton Pikesville hotel. Mandato notes that Greenmount Station serves a variety of classic American fare, including steaks, seafood and the ever-popular Maryland jumbo lump crab cakes.

Where the Chefs Preside: