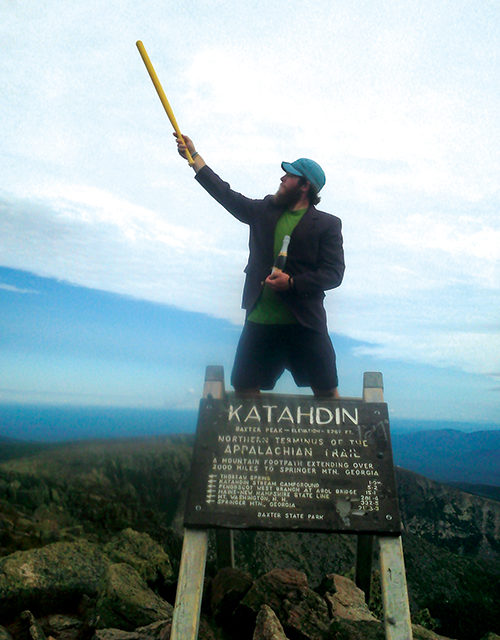 Doug Walters celebrates the end of the hike at Mt. Katahdin in Maine.

A hike that lasted five months and covered more than 2,000 miles.

Along the way he picked up new friends, a new outlook, and the nickname, “Wiffleball.”

Between March 20, 2012, and August 18, 2012, then- 24-year-old Westminster native Doug Walters accomplished something that makes him part of a very elite club: he thru-hiked the Appalachian Trail.

The Appalachian Trail – or “A.T.,” stretches from Georgia to Maine, and a “thru-hiker” is someone who walks the entire 2,180-mile trail in one long hike.

Only about 2,000 people even attempt to thru-hike the A.T. each year, and only one in four of those actually completes the hike. Doug Walters is one of those few.

Walters became interested in the Appalachian Trail as a child in Carroll County when he visited a local nature camp.

“That was when I first heard about the A.T. I thought it was so cool that there was a trail that went from Georgia to Maine,” he said. “It became my goal to hike it.”

Walters’ love of nature has long been a driving force in his life, but the passion goes beyond his own enjoyment. The burly, 6-foot-1-inch hiker, who exudes a combination of energy, enthusiasm and laid-back calm, said, “A big part of my life has been getting other people interested in the outdoors.”

It was this passion that led him to major in environmental studies at Shepherd University, in Shepherdstown, W. Va., where he earned a degree in 2010, and to take a position as a naturalist at Catoctin Creek Park and Nature Center in Frederick.

But the A.T. continued to beckon, and in March of 2012, toting a pack that weighed approximately 28 pounds, Walters hit the A.T. at Springer Mountain, Ga.

He was alone for barely a day before he began gathering the small group of soon-to-be-friends who would accompany him for most of the next five months. Among his new hiking buddies: a physician, a grad student, a psychologist and 51-year-old Kentucky attorney, Mike Campbell.

“I think I spotted Walters somewhere around the Smokies,” Campbell recalled. He was first struck by the young man’s sense of humor.

“Quite often I’d hear fantastic stories roll out of his mouth,” he said of Walters’ proclivity for tall tales, like the one that he had hiked the A.T. twice before but had turned around a few feet from the end of the trail to start over.

Soon Campbell noticed something else about Walters: “He has a very deep understanding of our relationship to the environment,” said Campbell: “How much we gain from it.”

Walters made an impression in another way on the trail: poking up out of his backpack, which was otherwise full of ramen, instant mashed potatoes and assorted camping gear, was a plastic Wiffleball bat.

“It was something that didn’t weigh much and you could have fun with it,” said Walters.
It is tradition for A.T. hikers to acquire a “trail name,” and it was the plastic bat that not only got Walters the nickname “Wiffleball,” but led to some fond memories of impromptu ball games.

“We had like 30 hikers play a game on the top of a mountain once,” he said.

Walters’ easy-going attitude helped him take the challenges of the hike in stride. Side trips into local towns, the occasional night in a hotel and junk food binges helped as well.
And it did not take long on trail before Walters learned something unexpected about human nature.

“It’s called Ôtrail magic,’ Walters said; “It’s when a total stranger helps you. It can be the smallest thing, but out there it can mean so much.”

Some of the ways trail magic manifested itself on Walters’ hike were in a cake left for thru-hikers (secured in a tree out of the reach of bears, of course), a cooler full of sodas and chips left along the trail, and being offered a bed for the night by locals.

“I’d never been in the position where I really needed these little things,” said Walters. “I took away the idea that what’s a little act to you can completely turn around someone’s day.”
Walters had the opportunity to pay it forward toward the end of the hike: When Campbell discovered that his mother-in-law had died, the younger man arranged to drive him to the funeral. The two then returned to finish the hike. “We walked the last steps together,” Campbell said. “He pulled me through Maine.”

By the time Walters reached the summit of the trail at Katahdin, Maine, he had walked for so long he had a hard time stopping.

“I really was tempted to turn around and go back to Georgia,” he said.

Instead, Walters returned to Maryland, accompanied by Campbell and his wife, who stayed with Walters and his mom on their way home to Kentucky.

Campbell got even more insight into what drives Walters on a visit to Bear Branch Nature Center, where he was struck by Walters’ connection with the youngsters. “He really loves to teach and impart to them that relationship with the environment,” Campbell said.

Walters said that and other aspirations will come easier now. “Hiking the A.T. helped me realize if I’m putting in 100 percent I can pretty much accomplish whatever I want.”

He is making quick progress on his career path: He recently accepted a position as an educator for the Chesapeake Bay Foundation. Today, when he is not working at a nature center, Walters, who is single, can often be found white-water rafting, biking, and taking in live music.

There is more long-term hiking in Walters’ future: he plans to thru-hike the Pacific Crest Trail, the West Coast version of the A.T., perhaps in about five years, with some of the friends he made on the A.T.

Meanwhile, he often thinks about hiking. “Yeah,” he said, “I still feel more comfortable sleeping in a tent than in a bed.”