How to Enjoy the Beer Festival 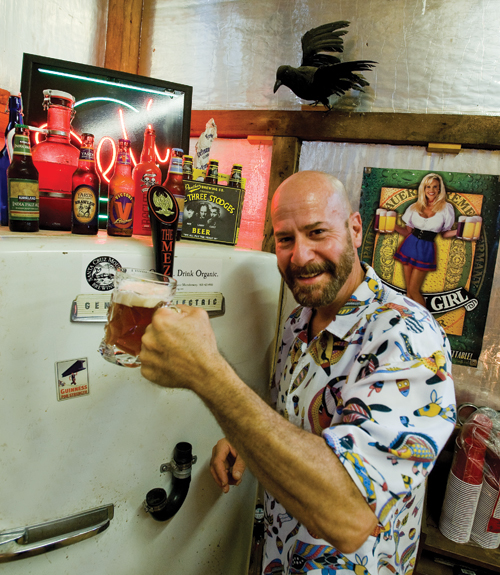 Neil Mezebish, president of the Midnight Homebrewer’s League, hoists a mug of his home brew.

As president of the Midnight Homebrewers’ League, Neil Mezebish, has heard it all at the annual microbrewery festival at Union Mills Homestead. But when the gates open on September 24, he and other beer connoisseurs know that novices and experts alike will find out a lot more about beer than a good mellow buzz.

Mezebish offer some tips to know before you go to this year’s festival:

Everyone has personal preferences in styles and the characteristics that they enjoy (or not) in any given beer style. Those who are serious about tasting and comparing beers commonly group the qualities of the beers they taste in the following categories: Aroma (looking for malt, hops, esters and other aromatics); appearance (color, clarity, head retention, color and texture); flavor (is it appropriate for the style. i.e., malt, hops, fermentation characteristics, balance, finish and aftertaste, other flavor characteristics); mouthfeel (body, carbonation, warmth, creaminess, astringency and other palate sensations) and overall impression (drinking pleasure).

How to Select and Appreciate Beer

Novices often find it difficult to select and appreciate beer. They find it hard to break their habits, to try brews that they do not think they will like. Also, they are concerned if they try a beer and really do not like it. The reaction is normal. Even experienced beer fanatics may not like all styles.

There are styles of beers, or specific beers within a style that someone may just not like. However, be patient. Let a beer warm up (you cannot taste everything that good beers have to offer if they are too cold) and give it a few tries before rendering a final opinion.

The Joy of Brewing and Teaching Others About Beer’s Nuances

Teaching is always enjoyable and most home brewers love sharing their knowledge and skills. The greatest rewards come from positive feedback.

Many home brewers regularly enter their beers in competitions and gain satisfaction from doing well against many other entries. Many who have been brewing for a long time find great satisfaction from producing truly great beers that are as good or better than their commercial counterparts.

It is also enjoyable to let folks who have never tasted such concoctions try a series of beers, and asking what they taste.

When you tell them what is in the beers and watch them respond, taste more and find the qualities you describe, they light up. They have learned and want more.

It is always fun watching someone sample a Belgian Gueuze for the first time. This is an extremely sour beer style–a centuries-old “lambic”– that many find unpalatable. To say that one must develop a taste for it is a huge understatement.

Many actually love this style, but it is so far from anything that most people expect in a beer, or any other beverage that is supposed to be pleasurable, it draws some extreme funny negative responses from most first-time tasters. Most will not go back for seconds, ever.

Twelve breweries will be represented at the fifth annual Maryland Microbrewery Festival on September 24 from 11 a.m. to 7 p.m. at Union Mills Homestead, 3311 Littlestown Pike, Westminster. More than 30 brands of beer will be offered for tasting at the event. Also on hand: Food, crafts, live music and entertainment. Tickets are $18 for adult beer sampling. Contact Jane Sewell at 410-848-2288 or www.UnionMills.org