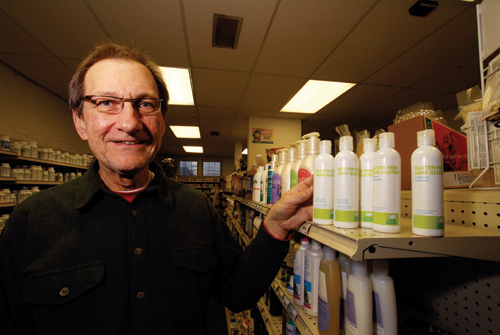 In the last decade, gluten-free food products have expanded beyond natural foods stores to supermarkets, celebrities such as Gwyneth Paltrow and Elisabeth Hasselbeck have banished gluten from their diets, and restaurants have started offering breads, cakes and even pizza made without gluten.

Gluten, a protein composite found in wheat and related grains such as barley and rye, is widely used in packaged and processed foods. It gives bread texture and chewiness, thickens sauce and gravy mixes, extends the shelf life of soy sauce and flavors sausage.

For the majority of Americans, no problem. For those going gluten-free because it’s trendy, no problem. Their bodies can tolerate gluten if they go off the diet. But for the growing number who have celiac disease or a milder sensitivity to gluten, problem.

Celiac disease is a gastrointestinal disorder with a range of symptoms that can include diarrhea, constipation, bloating, abdominal pain, joint pain, skin rashes and irritability. The disease has doubled its victims every 15 years since 1974 and is now believed to affect one of every 133 Americans. When celiac disease sufferers consume gluten, their immune systems respond by destroying villi, the feathery fingers in the intestinal wall that let nutrients pass into the bloodstream. Result: many celiac victims are malnourished, no matter how much they eat.

Others have a milder sensitivity to gluten. Ron Buczkowski of Taneytown may be in that group. The owner of Harvestin’ Natural in Westminster was stocking gluten-free products in his food store and eating them for decades before gluten-free went mainstream. Buczkowski said he can feel the allergic reaction in his sinuses when he eats gluten.

Medical researchers do not know what is behind the increase in celiac disease. Greater public and medical profession awareness, new strains of wheat with higher gluten content and the prevalence of gluten in processed food may contribute.

“The cause is not clear,” said Dr. Cristian D. Alba, a Westminster gastroenterologist. He noted a recent article in medical literature that suggested too early introduction of gluten into a baby’s diet may be a factor.

“Both medical practitioners and the public are more aware. I can’t say I see a large increase, but it’s more prevalent than 20 years ago,” said Dr. Robert N. Kass, a family care practitioner with Johns Hopkins Community Care Physicians at Westminster. Kass said he has patients who ask for tests after having read about gluten intolerance. For patients who may be gluten-intolerant, he orders basic blood work and refers them to a gastroenterologist.

“The reason I do this is that if you tell someone to eliminate gluten from their diet, that’s a drastic change,” said Kass. “You want to be sure the patient has celiac disease.”

Patients with celiac disease need to know they face possible complications such as miscarriage, small bowel lymphoma and osteoporosis, said Alba. “It is important that a patient is property diagnosed and followed by a gastroenterologist.”

The treatment for celiac disease is simple: avoid gluten. Jean Daniello, registered dietitian at Carroll Hospital Center, helps gluten-intolerant outpatients learn to shop and eat gluten-free. Daniello teaches how to avoid gluten in foods that an average person might not be aware of. For example, chicken nuggets breaded with wheat flour. Her patients learn to fill their shopping carts with fresh fruits and vegetables because gluten lurks in many processed foods.

To get the serving of grains recommended in the U.S. Department of Agriculture’s new “My Plate,” the gluten-intolerant can eat rice, wild rice, millet, buckwheat, tapioca, quinoa and amaranth. Oats are iffy: They are gluten-free but may absorb gluten from being planted or processed near wheat.

Daniello said most of her patients stick with the gluten-free restrictions, even though it is a diet with no vacation.

“Most of the patients I see start to feel better so quickly they stay on it. Yes, it’s overwhelming, but there is so much more information [now], I don’t think people are as overwhelmed as they used to be,” she said.

But highly gluten-sensitive shoppers should beware of possible gluten contamination from wheat products processed in the same factory as gluten-free products, said Harvestin’ Natural’s Buczkowski. He sells flours and pasta labeled “dedicated facility,” processed in a plant where no gluten-bearing grains are processed. He also stocks gluten-free shampoo, conditioner and lotion for those who cannot tolerate it on their skin.

Gluten-free dining out is becoming easier, although many restaurants ask customers to call ahead if they want bread or rolls. At Gunner’s Grille in Taneytown, owner-chef Brooke Hagerty bakes gluten-free bread for a frequent diner who has celiac disease but loves sandwiches. Another gluten-intolerant customer enjoys the restaurant’s sweet potato fries. To avoid risk of gluten contamination in deep fryer oil, she oven-bakes his fries.

Meatloaf sounds like a no-no for celiac sufferers, but Hagerty’s menu includes a gluten-free meatloaf “muffin.”

“I wasn’t even thinking about that at the time,” said Hagerty. “ I just wanted to make something that was filler-free.”

Starry Night Bakery & Coffeehouse in Westminster has seen increasing demand for its gluten-free cupcakes. Owner Shannon Clarke said she gets “a couple dozen” orders for the cupcakes every week, and counter sales are steady. She makes the cupcakes with tapioca, rice and garbanzo bean flours, and bakes them first in the morning, when the kitchen is sterilized. Clarke estimated that 75 per cent of her cupcake customers have celiac disease or gluten intolerance, while the others, “are probably people who are just being a little more health-conscious.”

People who believe they may be gluten-intolerant should get tested, said Daniello. “A lot of people self-diagnose for celiac or gluten intolerance. But celiac needs to be tested because there can be other medical conditions that need to be followed.”