Nursing… A Calling For Generations To Carry on the Profession 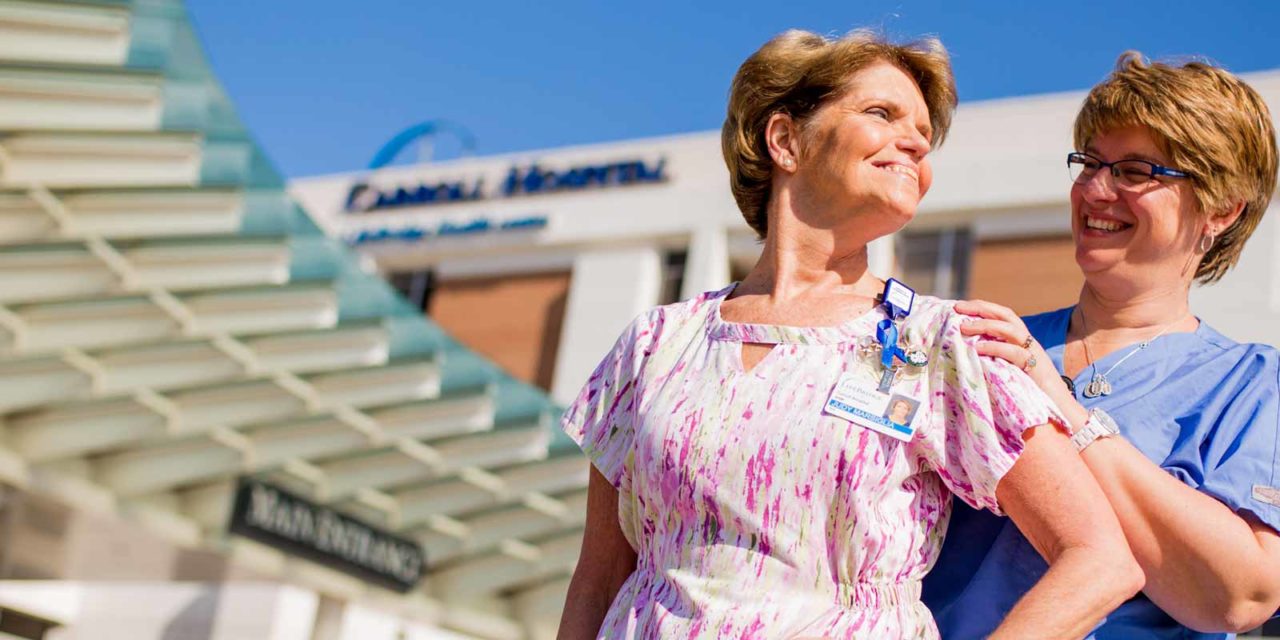 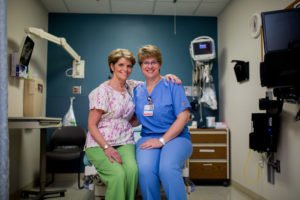 In the late 1990s, Julie Jarosinski enrolled in the business program at Salisbury University, but her mother’s heroism during Parents Weekend set her on a drastically different career path.

During the Sunday service, the family sat in the back of the campus church. An elderly woman in the row ahead fell over, and Bonnie Dudash, Jarosinski’s mom, sprang into action. She checked the woman’s vital signs, called 911 and calmed her.

Despite disliking science and blood, Jarosinski changed her major — to nursing.

“She was there and knew what to do,” Jarosinski said. “I felt like I needed to know what to do.”

Today, both mother and daughter work on the pediatrics unit at Sinai Hospital (although not on the same shift).

“She’s one of the best nurses I ever met. She never lets people down,” Jarosinski says. “She’s good at what she does and she’s very knowledgeable. She’s a good resource for everyone on the unit.”

Like Julie Jarosinski, many nurses today credit a family member in the profession as inspiration for their pursuit of the same career.

It was only natural that Amy Selby followed her mother’s and grandmother’s footsteps into the nursing profession.

Selby fondly remembers attending Judy Marsiglia’s nursing school graduation and proudly handing her mother a rose. She also recalls visiting her mom at Carroll Hospital and having lunch and feeling comfortable at the “coolest place.” She always volunteered to accompany her mother to pick up a check or something she had forgotten there.

Originally, Selby enrolled in the University of Delaware’s pre-med program, but she realized at the end of her freshman year that she wouldn’t physically work in a hospital with patients for another five years. She transferred to the School of Nursing so she could be at the bedside sooner.

Today, after more than 15 years as a cardiac nurse — in California and Pennsylvania, and for the past three years at Carroll Hospital Center — Selby looks back and credits her mother for most of what she does, including her career choice.

“My mom influences my decision to be all that I can be. … She is a wonderful mom, a great friend, an amazing nurse, a devoted wife and highly respected among her peers and the community,” she says.  “I am my own person and we clearly have differences, but in many ways, what else could I want to be?”

Selby recalls the fulfillment the job gave to her mother and she loved watching her so happy in her work.

“We’re both very similar in that love of helping others,” she says. “She would come home and talk about her patients and I could see how much she enjoyed her job, and she had so many friends at work.”

Marsiglia did not consider nursing until after she had Selby, and found the experience at the hospital “wonderful.”

Her mother and two aunts were nurses, but Marsiglia says that what her generation did was go to school and then get married — which she did just months after graduation. She was content in her first job at Reisterstown Lumber Co. as one of five women on a staff of 60.

But after Selby’s birth, Marsiglia entered a program at Catonsville Community College that took three years. She worked the night shift part time beginning in 1977. From the start, she says, she has felt she has made a difference in the community, caring for people she knew growing up and at school. Not a day goes by that she doesn’t see someone who knew her, knew of her, or is someone she knows now. In the Post Anesthesia Care Unit, she employs what she feels are the most important nursing qualities — compassion and listening.

“I had an anesthesiologist always tell me: Listen and look at the patient and you will know what the patient is feeling,” she says.

Marsiglia took that guidance to heart, and has accomplished much over her 40-plus years at the hospital. She’s been Nurse of the Year, received the national DAISY Award for providing extraordinary care and the Employee of the Month award, and was on the clinical ladder for career advancement and professional development for many years.

She’s also on motivational posters, and Selby is proud to see her mother in that way, and to consult with her on trying cases or after difficult days.

“I texted her on a bad day and looked up and there she was to give me a hug,” Selby recalls. “I will be really sad when she retires. But I’ll be really happy, too.

“She’s an amazing nurse, well loved, beautiful,” she said. “She’s everything I want to be.”

And her mom, too, feels pride for her daughter and her success at work. Selby stepped in to put her cardiac expertise to work when her stepfather had two heart attacks.

“I feel very fortunate that I will have her to look out for me if I ever have a problem,” she says. 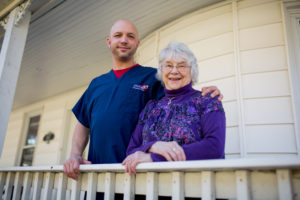 Like Marsiglia, James Gannon found nursing as a career choice after trying something else. Gannon returned to college in his late 20s after a stint in the restaurant business. He, too, had nursing in the blood. His mother retired from Carroll Hospital in 2014, after more than 25 years of service, and his grandmother also was a nurse who worked in the prison system. His grandfather and great-grandfather were both doctors.

“I fought the profession until I was 30,” says the Finksburg resident. “This is just what I have to do. This is natural.”

While a pre-nursing major at Towson University, Gannon was accepted into the clinical nurse leader program at the University of Maryland and changed his major to psychology to graduate quickly and start the program. After more than four years at Sinai Hospital, he left to serve as a travel nurse with his wife. They worked in five states before returning to Carroll County.

After one year at Carroll Hospital Center, he transferred to Sinai, where he now works as assistant nurse manager in the Emergency Department.

Gannon calls most on his empathy, being able to put himself in the patient’s position and feel something close to what he’s feeling, especially in the ED.

“Whether it’s a true medical emergency or not, for them it is a true emergency, and we have to realize how they feel,” he says. “Caring, compassion, patience. They sound so cliche, but they all are really important in nursing.” 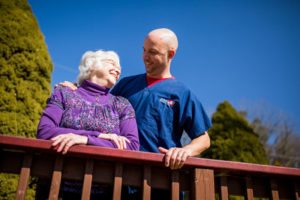 He also credits having a strong stomach. The ED is not like it is portrayed on television, which lacks the smells, sounds and intensity of a real ED.

“I really felt the personality and who I am was born to be a nurse,” she says. “Patience, caring, loving are a big part of my personality.”

She feels the “Gannon influence” on her son, as his intelligence stems from that side of the family. “He got the caring, loving piece from me,” says his mother, who now volunteers in the hospice program at Northwest Hospital. 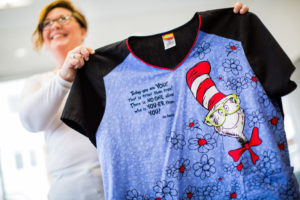 Lisa Redelius with her spirited scrubs.

Like police officers, firefighters, restaurant workers, dental and veterinary technicians, mechanics and many others, nurses wear a uniform. Scrubs are sanitary clothing worn by medical professionals, usually a blend of polyester and cotton with a drawstring pant.

Hospitals usually require department staff to wear scrubs in certain colors, but those rules are relaxed in pediatric departments, and the staff can display their personalities through what they wear.

Lisa Redelius, a pediatric nurse at Carroll Hospital, wears bright, colorful and decorative scrubs. The reason? To ease the fears of young patients.

“Kids are terrified,” she says. “They don’t know you. If they came through the ED [emergency department], somebody put an IV in, and poked them to draw labs — and they don’t feel well.”

She wears scrubs that bear the mischievous Thing 1 and Thing 2 from Dr. Seuss’s The Cat in the Hat. She also has scrubs that show Winnie the Pooh’s mournful donkey friend, Eeyore, and others that have splays of flowers.

“If they recognize [the character], it can be a conversation starter,” she notes. “It can take the focus off of what is happening and make them think about something else.”

Carroll Hospital pediatric nurse Kara Torchiani also favors colorful scrubs. She sports Winnie the Pooh, cartoon avengers like Spider-Man and Captain America, and minions from Despicable Me. She also has an outfit that features butterflies, and others that are just solid prints.

“Parents use them as a distraction, too,” she adds. They draw attention to Winnie the Pooh or Tigger, which enables her to perform nursing duties that are not necessarily fun for children.

At Sinai Hospital in Baltimore, the only unit where staff are permitted to wear printed scrub tops is pediatrics. The nurses coordinate what they wear according to a schedule that includes “Mermaid Mondays,” “Cat-urday Saturday” and “Fruity Friday” In the past they have dressed for “Flip-Flop Friday” and “Pirate Day” Wednesdays. On Catur-day, Manchester resident Julie Jarosinski wears a scrub top with that bears an image of the kitten Marie from The Artistocats, her daughter’s favorite.

It’s a far cry from the white scrubs that nurses wore in the past — and that’s the point.

“It’s scary being in the hospital,” says Jarosinski. “White was the worst, associated with doctors’ lab coats. We help take the fear away.”  – LINDA ESTERSON