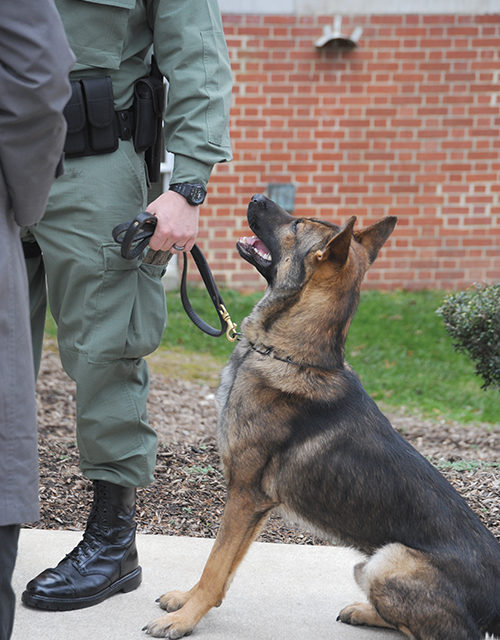 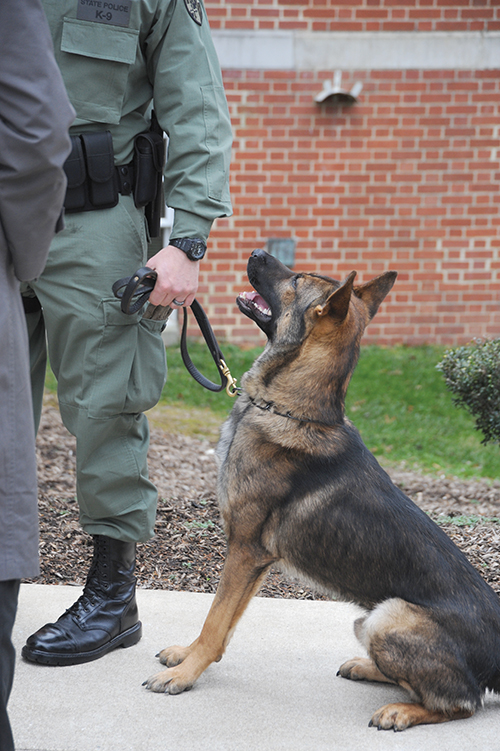 More than a dozen states will officially observe K-9 Veterans Day on March 13.

by Jeffrey B. Roth
photos by Phil Grout

For longer than the span of memory or history, dogs and humanity have marched side by side into the future.

Dogs are family members, friends, playmates, co-workers, rescuers, protectors, teachers, advocates and therapists — all rolled up into a shaggy, cold-nosed, tail-body wagging package of unconditional love and fidelity. Sometimes it is difficult to tell whether dogs or people are the main benefactors in the relationship.

As warriors, dogs and soldiers bravely serve their home and country, from present-day Afghanistan and Iraq back through history to ancient battlefields. The earliest written account of the use of military dogs dates to 600 BCE and a war between the Cimmerians and the Lydians on the Black Sea’s Crimean Peninsula (modern Ukraine).

In honor of this legacy of service, former state Sen. Joseph M. Getty, who was recently appointed by Larry Hogan to serve as the new governor’s policy and legislative director, introduced legislation to make the recognition official. He sponsored SB 651, which unanimously passed the State Senate in March 13, 2014. It was sent to the House of Delegates for a hearing March 27, where it awaits action.

“After reading Mr. Roth’s article (“On November 11: Honoring Another Kind of Veteran” in October/November 2013 edition of Carroll Magazine), I asked my staff to research the work of the U.S. War Dogs Association and the effort by other states to acknowledge K-9 Veterans with a commemorative day on March 13 (the Army canine corps was established on March 13, 1942),” Getty explained in an email to the magazine.

When the bill came before the Senate Education, Health and Environmental Affairs Committee, representatives from the law enforcement community, including a Maryland State Police dog named Rico and his handler, Sgt. Scott Scala, provided testimony about the important role dogs play in the military and law enforcement, Getty said. Committee Vice Chairman Sen. Roy Dyson invited the dog to come to the center of the room so that everyone could see him. Scala had Rico demonstrate a few of his skills, then the dog sat quietly during testimony. Getty’s legislative assistant, Pam Stocksdale, told a personal story about her dog Hunter — a male chocolate Labrador retriever she raised and then donated to the State Police for explosives detection work.

“Hunter has been an explosives dog for the Maryland State Police for six years, protecting the citizens of Maryland and securing our state buildings, including here in Annapolis during the legislative session,” Stocksdale said. “I work here on staff in the Senate and I’ve had the opportunity to visit and watch Hunter work. … These dogs are an invaluable part of our country’s security, whether they search and protect these buildings in Annapolis, BWI Airport, M&T Bank Stadium or they search for a missing person or work with our armed forces. They deserve one day to recognize them for their service.”

Cpl. Jon Light of the county Sheriff’s Office said the department has three patrol dogs, one of which is trained in explosives detection. All of the dogs are trained in narcotics detection and in missing persons and subject searches.

“Between the search functions, such as in an armed-robbery incident, certainly without canines that would be much more difficult,” Light said. “Canines are extremely valuable resources as far as all the detection qualities they have, such as in a major event like the [bomb threat] at South Carroll High School last year. Canine units responded from all over the area to assist in searching the building.”

While Maryland will not officially recognize K-9 Veterans Day this March, the Maryland State Police, Carroll County Sheriff’s Office and other law enforcement groups with canine units will mark the day. In fact, the State Police recently held graduation ceremonies for its newest K-9 team members.

“We have 31 handlers and 41 dogs assigned to four different service disciplines,” said Sgt. Joe Catalano, commander of the K-9 unit at the Special Operations Division in Jessup. “They serve in drug detection with the narcotics division, patrol, searches for missing or wanted individuals and work in explosive detection.”

On Dec. 19, in Sykesville, Maryland State Police Superintendent Col. Marcus L. Brown welcomed eight new K-9 teams into the ranks during a ceremony that ended months of intense training to prepare the dogs and their handlers for law enforcement duties. The graduates included four first-time K-9 handlers and four veteran handlers who were training new dogs. The dogs included Labrador retrievers, German shepherds, and Belgian Malinois. The graduation was the culmination of 16 weeks of rigorous training for dogs and handlers. It included drug detection, search and apprehension techniques.

In July, through a partnership with the Department of Homeland Security’s Science and Technology Directorate, the Maryland State Police became the first state police agency in the country to train and deploy “vapor wake” detection dogs. Such training will enable the dogs to alert their handlers to the scent of explosives emanating from a person passing by in a crowd.

“I think it’s a great idea to honor K-9s for their service in the military and in law enforcement,” Catalano said. “They do tremendous work. They are hard-working and loyal, and are unsung heroes which get little recognition.”

At the national level, Sen. Gary Peters of Michigan has been working to get K-9 Veterans Day legislation passed. And on Oct. 28, 2013, the John Burnam Monument Foundation, a national war dogs memorial at Lackland Air Force Base in San Antonio, Texas, was dedicated.