The Best of Both Worlds 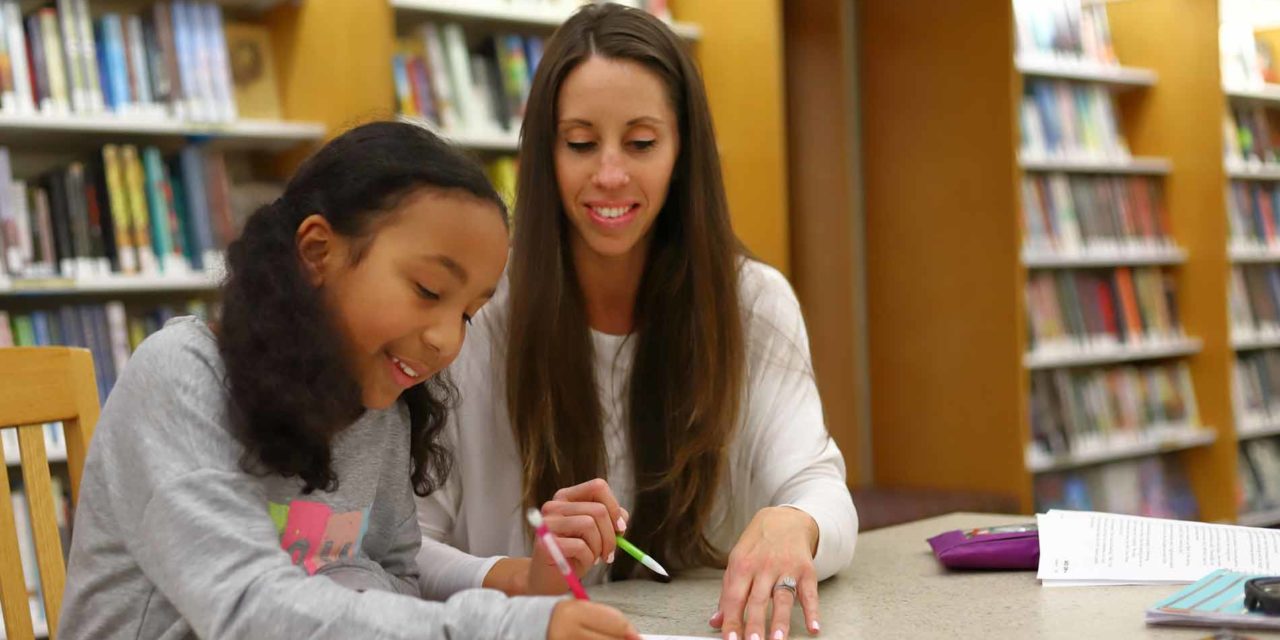 In the mid-20th century, the mother’s role was the homemaker. She made sure the children were fed and nurtured and the home was properly kept, from the laundry to the cleaning to having a meal ready when her husband returned from a long day at work. Today’s stay-at-home moms are not those portrayed by Edith Bunker, Lucille Ball or Carol Brady; instead, her role has evolved to include caregiver and domestic engineer, but also working professional, and she juggles the hats all in a day from her base at home.

Many stay-at-home moms of this century are wage-earners. For some it’s necessity; for others it’s a choice to remain professionally connected and challenged while managing the responsibilities of parenthood at home. Regardless, moms today can thank technology and opportunity for the flexible employment, and they are making their work succeed for their families.

“A lot of women don’t want to put their careers second, like on the back burner, just so they can raise kids,” says Jillian Sober Rothschild, an Eldersburg stay-at-home mom of two who started a business from home. “But it’s just a balance, and I have been lucky to have the best of both worlds right now.”

For 11 years, Jillian worked as a classroom teacher for Carroll County Public Schools. After she delivered her first son, she returned to the classroom. But following the birth of her second in May 2018, she realized she needed a change.

“I was just pulled in a million directions,” Jillian says. “And I was feeling I was not helping the kids the way I could have been.”

Jillian had earned a master’s degree as a reading specialist and knew that such a position would require more administrative responsibilities and less classroom time. Instead, she took “a leap of faith,” and with the support of her husband, Brandon, she created fliers, posted on Facebook and became a tutor. She worked with her first student that summer.

During the day, she’s at home with her 4½-year-old and 20-month-old sons, handling domestic responsibilities like meal prep and laundry. She says she’s always forward-thinking, planning meals for the family to be placed in the oven before her return home. At 3 p.m., she leaves to meet with her students at their homes or at the library. By then, she’s ready to turn her focus to her students.

“It’s really hard to stay home,” she says, reeling off the emotional, physical strains and the resentment that can surface, countering the guilt that full-time-employed moms feel about not being home. “Part time, for me, is just the perfect balance.”
According to Sara Raley, associate professor of sociology at McDaniel College, the role of the stay-at-home mom is changing.

“It’s becoming a lot less common for women to do nothing as far as paid work goes, even side gigs or side hustle that they’re calling the gig economy,” says Raley, who also works from home part time, teaching her courses online. “There is just so few of those people anymore.”

Figures from the U.S. Bureau of Labor Statistics don’t specify if a parent works from or out of the home, but indicate that care still falls primarily on the mother, whether or not she is employed. According to the department’s American Time Use Survey, which studied time spent in primary activities for married mothers and fathers from 2013-2017, married mothers employed part time assume 81.9 percent of care for household children under the age of 18, compared to 85.6 percent if they are not employed and 73.5 percent if they are employed full time. The survey also concluded that married mothers working part time assume 93.1 percent of the care when the youngest household child is under age 6, as compared to 92.8 for mothers working full time. Mothers who are not employed care for the children 94.1 percent of the time. 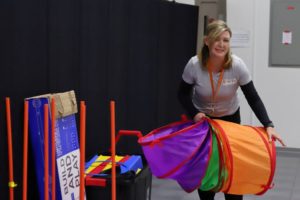 Courtney Mathias started Fit Friends once her own children began elementary school as a way to stay the primary caregiver to her children.

With childcare responsibilities mounting, Courtney Mathias also decided with her husband that she would leave her full-time job as a dental assistant to stay home to raise their children until both reached elementary school age. Once her youngest started preschool, she had a few hours free, “but that didn’t leave me much time to get a part-time job,” she says. “It was important for me to be the one that was their primary caregiver.”

Courtney noticed the preschool experience provided little in the form of exercise for the children, and the activities offered near home failed to meet her scheduling needs. After much research and an online certification for personal training, she started Fit Friends, bringing physical activity to preschools as an after-school option.

Fit Friends has grown to provide seven weekly classes in three different locations in Carroll and Frederick counties. Courtney completes the bookkeeping, marketing and business work at home, and meets the school bus as both children now attend elementary school in Sykesville. She estimates she spends 20 hours per week on the business, including her work from home and the preschool-based classes.
“It’s working great. We keep the routine the way it is,” she says. “It’s a great luxury. I still get to be a mom almost 100 percent of the time.” Courtney may call on her mother or mother-in-law in a pinch, and there’s no need to enroll in before- or after-care or pay a provider to assist like others who work outside of the home.

The financial aspect, she says, is third on the list. She’s also a massage therapist, and provides services to a few clients during the day and occasionally on Saturdays. 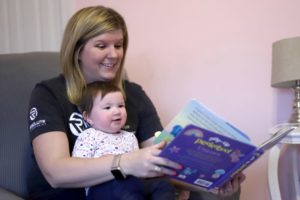 Ashlie Wolfe, too, occasionally spends time on Saturdays completing work. Ashlie spent 15 years working as a recruiter for the federal government as she acknowledges needing a second income to care for her growing family. She worked full time outside of the house for the first six years of motherhood, but in 2018 realized the responsibility was too great.

The care she provides includes helping her youngest son, Parker, who has cerebral palsy and also endures seizures. It was hard to find care that was adequate and not incredibly expensive, she says.

“It just wasn’t feasible for us, and you always feel like no one’s going to watch your child or care for them the way you would. But it’s even more paramount when you’re a special-needs mom,” she says, noting medications, therapy, physician appointments also pulling at her time. She’d run out of leave — even go in the negative — because someone had to be home.

Together, she and her husband, Michael, decided to go down to one income. In October 2018, Ashlie resigned from her government position, in part to home-school Parker. Two days later, she learned she was expecting their daughter, who was born in June 2019. Ashlie says she loves being home, caring for her children, being the nurturer.

“But I also found myself really missing something. … When you’re in the workforce for 15 years, that’s all you know,” she says. “All of a sudden, you are home and your responsibilities are cleaning the house, doing laundry, meals and changing diapers. I needed to talk to adults.”

She couldn’t go back to an office, with a baby and a child with special needs with therapy appointments in Ellicott City twice a week and medical visits in Hershey, Pennsylvania, sometimes without notice. She needed flexibility.

At her oldest son’s birthday party in September, she chatted with a friend who owns a recruiting company. After an interview, she was hired and provided with the tools she needed for a home office. With Wi-Fi and a laptop, she’s productive during down times like naps, evenings and even breaks in the waiting room during Parker’s appointments. She’s also on conference calls during the day with background family noise. Michael is home from work by 1:30 p.m., and takes over with the kids. Once every few weeks, they meet at Ashlie’s Columbia office and trade vehicles: Michael drives the van — and the younger kids — home so Ashlie can be around adults for a few hours, dressed in work clothes with hair and makeup done, and have a hot meal to herself.

“It really works out nicely. I really have the most ideal setup, and I realize that and don’t take it for granted,” she explains. “The financial aspect is really nice. I’m not going to lie; I like getting a paycheck. … We can do more and give our kids more experiences and the life that we want them to have.”

While moms like Ashlie, Courtney and Jillian manage an income from home, they rely heavily on their husbands, who handle more responsibility than the traditional father.

Michael changes diapers, gives baths, reads stories, does laundry, takes the children to the playground, and makes lunches, doing whatever is needed to give Ashlie a break or enable her to work.

“It’s balance, it’s prioritizing, it’s what’s important to you,” says Ashlie. “My family comes first, my kids and my marriage.” 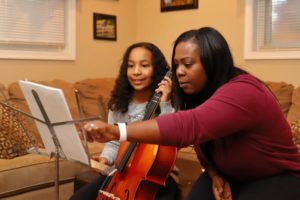 Belinda Lawson started The Mom’s Group of Carroll County on Facebook and volunteers her time managing the site and connecting the 3,800 member moms. It’s enabled her to remain a stay-at-home mom, but still feel productive and connected to others.

For some, however, managing the household, the children and a job proves too daunting. Belinda Lawson returned to work following maternity leave. She and her husband, Michael, considered day care, but he was able to successfully run his home-based business while caring for Faith. After two months, however, Michael secured a big contract, and they decided Belinda would stay home to raise their daughter.

A few years ago, Belinda tried driving for Uber for some earnings and to have a break from the house. She found the drive to find jobs often 45 minutes away from their Sykesville home not worth the expense or the time.

For fulfillment for herself — and others — she started The Mom’s Group of Carroll County on Facebook two years ago. She volunteers her time managing the site and connecting the 3,800 member moms. It’s enabled her to remain a stay-at-home mom but still feel productive and connected to others.

“I feel like I have the dream,” she says. “Because [Michael] is successful, I’m able to stay at home. I don’t think a lot of people have that option.”