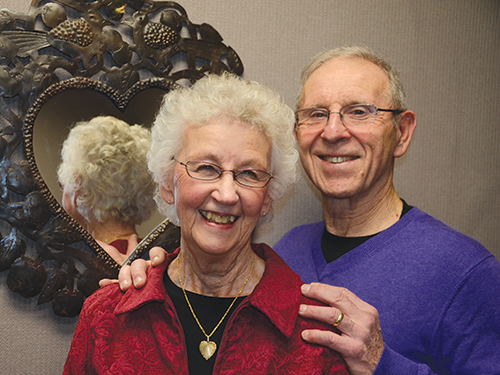 Anne and Bill McKenna, co-directors of the Marriage Resource Center in Westminster, say their understanding of romantic love is based on their 55 years together.

Some say romantic love is a hoax – an artifact of medieval literature.

Others say feelings of romantic love are, at least in part, an effect caused by oxytocin, the so-called love hormone, in combination with psychological factors related to attraction, trust, learning and other cognitive functions. Some have even suggested that physical attraction may be linked to human pheromones, although studies have failed to scientifically verify that theory.

Written records from ancient cultures indicate a human fascination with love – romantic, familial, societal, unconditional, religious and its other myriad forms. Stanley Plumly, poet laureate of Maryland, said the Western, popular concept of “romantic love is a medieval concept that comes from the Provencal poets (troubadours), in France É all the romance surrounding knights in armor, maidens in castles – courtly love as opposed to spiritual love.”

The literary tradition of romantic love “reaches its apex in the poetry of John Keats, in his romance narratives, as well as certain sonnets, particularly ÔThe Eve of St. Agnes,’” a long poem of 42 stanzas, composed by Keats in 1819 and published in 1820, and the ballad “La Belle Dame Sans Merci,” said Plumly, who is a professor of English at the University of Maryland, College Park.

The concept of romantic love is a double-edged sword, with a certain sadness as well as a wonderful sweetness. Uplifting, but, at the same time, having the potential for tragedy.

“I don’t think one part of the emotion is possible without the other and I think that is part of its great power,” said Plumly. “Anyone who has been in love knows this intuitively. Maybe this is why we have marriage, an in-between state, a resolution of differences, which I don’t think we could survive without.”

Caenorhabditis elegans or C elegans for short, a nematode less than one inch in length, which can be found in rotting fruit, has as many or more genes than a human being, said Eric S. Haag, professor of biology at University of Maryland. The nematode, the subject of research by Haag, relevant to the study of evolution and ultimately, mammalian and human sexuality.

“I am mostly interested in how, during evolution, the animal’s way of partnering and mating has changed,” said Haag, who has used the nematode for the basis of his research during the past 20 years. “If you look at closely related animals, you often find that they have very different ways of reproducing. From my perspective as a zoologist, what we call love and pair bonding is all in the service of reproduction, but it may feel much more fun than simply a way to make babies.”

All of the behaviors – the chemistry and biology of attractiveness and of love and feelings of loyalty – are beautiful and worthy of poetry, Haag said, but it is also very important to reproductive success. Humans are not unusual in that all animals use chemical cues, (in nematodes, nematocin is the worm equivalent of oxytocin), and hormones to regulate who they mate with, how they mate, when they mate and how many offspring are produced.

Postdoctoral research associate Sandra J.E. Langeslag, of the department of psychology at the University of Maryland, said her studies of neurocognition have shown that romantic love is associated with decreased cognitive control. All human behaviors arise from the interaction between the brain, body and the environment, she added.

“In humans, romantic love consists of sexual desire, infatuation or passionate love, and attachment or companionate love,” Langeslag said. “There are major gender differences in romantic love and in sex hormones. It’s well known that men have a higher sex drive than women. Moreover, I have conducted one study in which I showed that men who were in love had lower levels of blood serotonin, a neurotransmitter, than men who were not in love, while women showed the opposite pattern. In women, obsessive thinking about the beloved was associated with an increased serotonin level in blood.”

Romantic love, Langeslag said, is a very complicated and elaborate phenomenon, which science is just beginning to understand. Understanding how something works and knowing how to influence it are two very different things.

Relationship counselors, Bob and Lori Hollander of Relationships Work a private therapy practice in Owings Mills, said romantic love is emotional, mental and physical – all encompassing. It involves the head, heart and hormones.

“You feel a sense of warmth and tenderness and affection for the other person,” Lori said. “You have sexual feelings for them and you feel attached. In your head, the mental part, you like this person, you enjoy their company, you want to talk to them, you want the other person to feel happy. The physical part, the sexual feelings – wanting to cuddle – are partly a result of oxytocin.”

Romantic love has a range of intensity, from the strong infatuation of puppy love, love at first sight, to a belief in soul mates; all contribute to the fantasy. People tend to discount puppy love because it is often expressed by young children. Agape, a form of unconditional love, allows people to express and show love, sans the sexual and carnal feelings, said Bob.

Bill and Anne McKenna, co-directors of the Marriage Resource Center in Westminster, said their understanding of romantic love is based on their 55 years together. To them, romantic love is when two people are attracted to each other physically and emotionally and enjoy being together. It is the result of an intentional effort to sustain a romantic relationship.

“Love at first sight – you may be strongly attracted to someone instantly, but it’s going to take time to develop a lasting bond,” said Anne. “Soul mates are when two people share a high level of commitment and open lines of communication. You trust each other, feel safe with each other and have each others’ backs. You are each willing to make sacrifices to make the other person happy.”

While love may be blind, it is “not all you need.” Romantic relationships have their ups and downs, moments of intense passion mixed with simple companionship, moments of joy and moments of sadness. The challenge, according to the experts, is to keep all the competing needs and emotions in balance.