Sex (As If You Didn’t Know) Is Not Simple 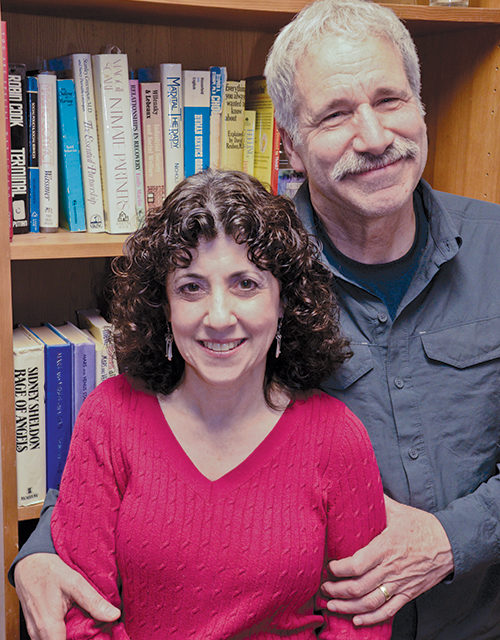 Lori and Bob Hollander are a husband-wife team of relationship counselors who believe that sex is about playing, relaxing, letting go and having fun.

If life was as uncomplicated as it seems in commercials, the key to having sex would come in the form of a little blue pill.

Alas, for many people it is not just about ability, but it can also be a matter of desire, or how much you and your partner want to cast aside all of your clothing and many of your inhibitions.

And it is not just that the loss of sexual desire is the most common sexual problem, according to Jennifer Barsky Reese, assistant professor of psychiatry and behavioral sciences at the Johns Hopkins University School of Medicine.

“It can also be one of the most complicated,” she said.

“What to do about it is pretty straightforward,” said Westminster-based couples therapist Alex Rickeman. “Why people lose it can be many different reasons.”

Those reasons can range from the physical to the psychological, and can stem from difficulties in a relationship and the daily stresses of life.

“You wake up, you go to work and you deal with kids,” said Lori Hollander, half of a husband-wife team of relationship counselors based in Owings Mills and Westminster. “Life is very serious after people get married and have a family. Sex is about playing, about relaxing and letting go and having fun. And if you talk to couples after they get married and have kids, how much fun do they have?”

“A lot of couples who have been together for a long time know exactly what buttons to push and in what order to push them,” she said. “If people start deciding not to follow the path usually followed to get to orgasm, they find that all the stuff before intercourse is so pleasurable, and not nearly as predictable. There are so many different kinds of touch.”

“Actions create the feelings. You can’t tell someone to feel sexy and loving. Couples have to touch and kiss more,” she said. “We talk to a lot of couples who don’t kiss when they have sex, which blows my mind. It becomes sex, as opposed to lovemaking. People also have to do things differently and get out of their routine.”

When the Hollanders’ children were growing up, Bob and Lori would get away from the kids three to four nights a year and stay in a bed and breakfast.

“We’re in a different environment, and there’s nothing to focus on except for each other. That was wonderful,” Lori said, and Bob, of course, agreed.

Sometimes, however, a lack of sex can occur because a couple has other problems to contend with.

“Couples that are unhappy in their relationship are probably not going to desire to be physically intimate all that often,” Reese said.

Those issues need to be worked through before focusing on the sexual aspect of a relationship, she said.

“Men need what women need, which is loving and caring,” he said. “And if both partners have that, there’s a nice collaboration when it comes to loving each other, and sex becomes more readily available to both. But if men are not accessing their emotions and are focusing purely on sex, what ultimately happens is a woman doesn’t feel loved. She feels like an object and moves away, the man feels rejected, and men at that point can feel as if they only way they can love is to have sex, and they will sometimes have an affair.”

A diminished sex drive may not be due to the state of the relationship, though. Because there are so many potential causes, it is important to undergo a thorough assessment.

Certain medications, such as antidepressants, are one cause. Another is depression itself. Physically, sexual dysfunctions — such as pain, an inability to enjoy sex or have an orgasm, ejaculatory control problems or being unable to have an erection — can contribute to a lack of desire. Self-consciousness plays a role, too.

“Women tend to get a lot of sexual desire out of feeling desired,” Reese said. “If you don’t feel attractive, that can be a major problem in terms of making you receptive to sexual advances.”

Rickeman added: “Many people report that sexual desire and sex itself greatly improve when they start losing weight. Part of this is physiological because the heart and circulation are working more effectively, but the other part is psychological. É If you have faith that your body works well in terms of arousal, you trust that being sexual will be a good time.”

The heart and circulation truly can play an important role, as can other conditions, according to Dr. Marc Leavey, a primary care physician at Lutherville Personal Physicians. Along with the research he has done in the field, Leavey cites an expertise gleaned from 41 years of marriage.

There is a reason why drugs such as that famed little blue pill (Viagra), as well as Cialis and Levitra, give men a better erection — Viagra was originally researched as a heart drug that opened up blood vessels and made circulation better. Conditions such as heart disease, pulmonary disease and diabetes affect blood flow and a person’s ability to perform, which can affect desire. The same can be said for women, as their sexual response is triggered by increased blood flow to the vaginal wall and clitoris.

The keys, the experts said, are to work on whatever the issue or issues might be, communicate with your partner, and be open to trying new or different things.

“Don’t look at sex as a pass/fail test, but as a mutual, pleasure-oriented activity,” Rickeman said.
“Finding new ways of experiencing a pleasurable relationship may not be what you did when you were 20 years old,” Leavey said. “But it can still be a lot of fun.”