Brad Wilson: A Passion for Coaching 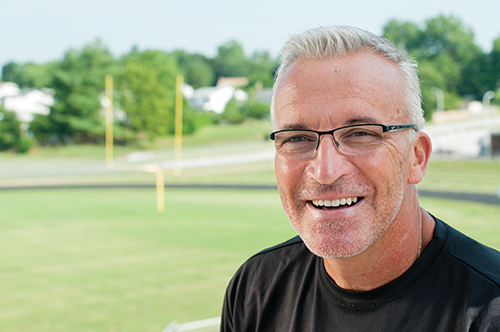 Written By: Lisa Breslin, Photos By: Walter Calahan
This fall, Brad Wilson launches into his 11th year as head football coach at Westminster High School. Wilson coached at Glen Burnie, North County and Meade before arriving at Westminster, where he and his staff have mentored the Owls to the state’s top ranks in Class 4A. Wilson has coached for 32 years in Maryland.

Wilson flows in and out of many roles effortlessly: coaching, teaching, working, playing, being serious (and being a prankster), to name a few. He is motivated by a contagious passion for every aspect of his life and all the people in it.

What is it about football that you love so much?
You can learn a lot about life through football, and through athletics in general. Life involves competition; life involves cooperating with people and knowing how to cope when things are not perfect. The game of football helps perfect each of these aspects of life. I also love the camaraderie of the game. I have an awesome staff: approximately 19 coaches and their families. We are all friends during and out of season.

I sense that there is even more that thrills you about football.
Friday nights in the fall – they are not just about the team, or the coaches, or me. When everyone walks into the stadium on Friday night, it is the band, the boosters, the administrators, and cheerleaders cheering. It is the student section going crazy, it is the long line by the gate as people wait to get in. It is the smell of what’s cooking on the grill at the snack shack. Friday nights in the fall are about the overall satisfaction of knowing that so many people are part of a good community.

How do you motivate your players?
I’m honest and truthful with them. They know that I’m a straight shooter. If I’m happy with them, I’m happy go lucky. If they make me mad, they know. They say I give them “the look,” but I’m not sure what “the look” is. Honesty motivates them. Plus, knowing I care about them, that I’m here for them and I’ll help them find any lifelines that motivate them.

What would you like your legacy as a coach to be?
That I cared about my players, the coaches and everyone involved in the program. That I was passionate about what I do and that I really had an appreciation for the people who help me do what I do.

When you are not immersed in coaching football, what do you like to do?
Football is a year-round commitment. The season ends in December with state championships, and players start training after the December break. They train three days a week and some are involved in other sports. But we have seven competitions throughout the summer. About the only week we are off is the week of July 4.

Although the time is limited, what do you enjoying doing when you are not involved with Owls football?
I keep my wife happy. I’m joking. I’m actually a family guy. I love being at home and spending time with my family. I also love to golf. Once a year I go to Myrtle Beach with Terry Molloy, the Athletic Director at Westminster, who sets the tone athletically, and we try out different courses.

What are some of your favorite movies?
I’m a very emotional person. People know how I’m feeling. I love my players and coaches and I tell them I love them. I ask them to do a lot of things – to make sacrifices to reach our goals. I push them hard, but I’ll cry at the drop of a hat. All this is context for a movie I love – The Notebook. I just love the passion that the two have for each other. It doesn’t matter what the situation is or was – passion helped them get through the tough times. I like those kind of movies. I also love to laugh, so I like comedies.

What music do you listen to to rev yourself up?
The ringtone on my phone is AC/DC’s “Thunderstruck.” When I first got to Westminster, I was regimented in my ways. All players had to wear black cleats and white socks; we walked in two lines on the field and off the field. No music in the locker room before the game. It had to be quiet so everyone could focus. Well, it was a great group of students, they were good athletes who worked well together. During the second year, the seniors came to me with a proposal that included “no white socks” (black ones) and they wanted to listen to music before the game. The song they wanted was “Thunderstruck.”

To this day, 11 years later, we listen to that song. We whoop and holler, but by the time we have walked to the stadium we are back in focus.

Do you have any fears that most people would not know about?
Yes, planes and boats. Because I really love my life and waking up in the morning; as I get older I don’t want to do anything that would keep me from living to be 110. It’s also known in Westminster that I don’t like rain. If it is cloudy or it even looks like it might rain, we practice indoors. I don’t want the footballs to get wet. I’m not a duck. We will play in it, but I don’t like rain. I don’t fear it though.

How have you changed over the years as a coach and as a person?
In my early 20s, I worried about everything. I worried about who liked me, who didn’t like me. I have learned along the way not to worry about things I can’t control. When I make decisions, they are not for everyone to like or dislike. I make them in the best interest of the people involved. Another change? Before, I did everything myself. Now, I trust my coaches. I have a great staff and I delegate to them. And now more than ever, I feel thankful and humbled because I love what I do and the people in my life.