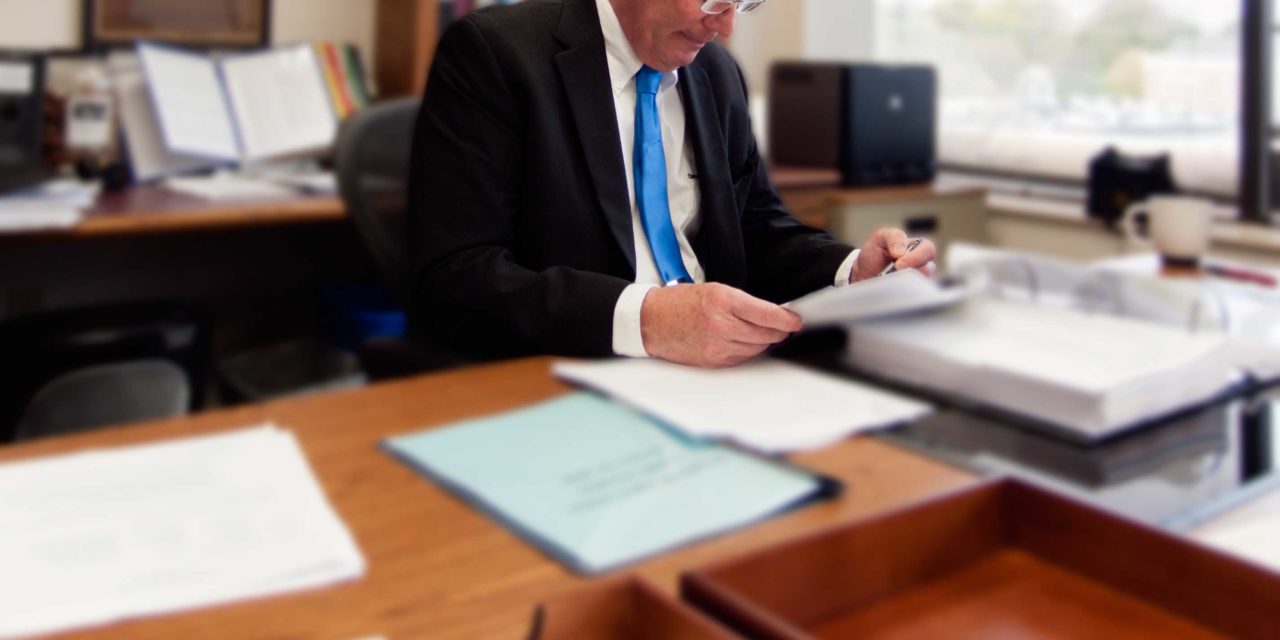 “It has been a tough year.” Hope Prevails 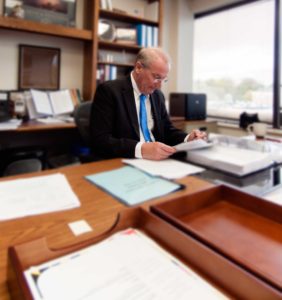 On any given day, Steve Guthrie is contemplating the futures of some 25,000 children, making decisions that impact the employment of some 4,000 people, managing numbers in a $329 million budget and addressing community groups in discussions ranging from bathroom gender issues, to high school math curriculum, to school start times.

Seven years into his tenure as the superintendent of Carroll County Public Schools, Guthrie acknowledges that this year has been a tough one. The school system closed three schools – North Carroll High School, New Windsor Middle School and Charles Carroll Elementary School – due to declining enrollment and budget constraints.

“On a personal level, it’s the most difficult thing I’ve ever had to do,” Guthrie lamented. “I spent the first five years as superintendent fighting the notion that closing schools was the solution to budget constraints.”

In his first five years as superintendent, Guthrie worked with his staff to reduce the school system’s operating expenses by $30 million through staff reductions, increasing efficiencies, realigning school bus times, rebidding health insurance, reducing discretionary funding, shifting costs to cover state funding losses and inflation and a host of other challenging endeavors. But as school enrollment numbers continued to decline, Guthrie said there were just no other options.

“It was a necessary business decision,” Guthrie said.

Guthrie’s leadership, marked by grit, intellect and compassion, contributed to Carroll Magazine’s decision to name him Person of the Year. 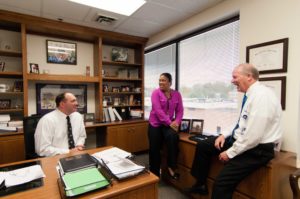 Although he and his staff have had to make incredibly difficult decisions in the past year, Guthrie still believes Carroll County is one of the best school systems in the state and he remains optimistic that it can get better.

Guthrie’s wife of 27 years, Barbara, a retired high school guidance counselor, said that one of the things she admires most about her husband is his ability to muster on and stay motivated.

“It’s been a really tough year,” Barbara said. “But one of the things I admire most about him is that he is able to keep going. He is very motivated to keep Carroll County as one of the best systems in the state. Through all of this I have rarely seen him discouraged. He goes to work every day with the goal of moving this school system in a positive direction.”

Guthrie said that he is proud of the work done by staff and teachers to make the best of an unfortunate situation.

“The good news is that through the hard work of staff, all of the consolidated schools had successful openings this year and we’re a more efficient school system because of it,” Guthrie said.

Those that work with him say he’s devoted, focused and committed to growing with the needs of the job. 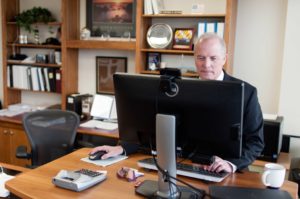 Assistant Superintendent of Instruction for Carroll County Public Schools, Stephen Johnson first met Guthrie in 1993 when Guthrie was working in human resources and Johnson was working at Westminster High School. The two have been working together in the central office since 1997. Johnson said Guthrie has a good grasp on the entire education system because he started as a classroom teacher and worked his way up through the administrative ranks before become superintendent. And Johnson said Guthrie has grown in this position by continuing to build his skill set at the state level.

“He started to take on more responsibilities state-wide and truly became a leader among the 24 school superintendents from around the state,” Johnson said. “I have seen him grow from a local superintendent of schools to a state leader in education.”

“I knew I needed to have a stronger presence across the state so Carroll County might have a stronger influence in state decisions,” Guthrie said. “These leadership positions have given me the opportunity to have individual audiences with state officials to talk about education in Maryland, but also to touch on Carroll County’s issues.”

Daria Buese is an associate professor and the Associate Dean of Graduate and Professional Studies for Off-Campus Programs at McDaniel College. Although she doesn’t know Guthrie personally, she said that professionally she is most impressed with Guthrie’s continued efforts to connect with the community.

Buese serves on the CCPS Education That is Multicultural Advisory Board and said Guthrie regularly makes the time to meet with this board of community members to update them on school system initiatives and concerns.

“It has been a tough couple of years with school closures and issues linked to the implementation of the Common Core Standards, but Steve always seems to greet his stakeholders with open ears and thoughtful responses to their concerns,” Buese said.

And in fact, Guthrie’s workdays often transition right into work evenings that include meetings and speaking engagements and community functions. Being Carroll County’s school superintendent is more of a lifestyle than a job.

Guthrie said that he has a life outside of the job, but that it’s not possible to disengage from the job.

“I can’t do my job and go home and forget it about it at 4 p.m.,” Guthrie said. “I’m always monitoring emails and taking phone calls and working through problems in off-hour times.”

That said, Guthrie does work hard to de-stress and stay healthy. He likes to exercise although what used to be a regular run is now more of a hearty walk following back surgery four years ago. But he also likes challenging his mind with projects outside of the office.

“I find one way to alleviate stress is by doing things that give me a sense of accomplishment – like completing a house project, meeting a personal goal, writing an article for a journal,” Guthrie said. “This job just doesn’t have a beginning, middle and an end. If I can tackle tasks outside of the job that have a beginning, middle and end, then I’ve accomplished something.”

James Doolan, president of the Carroll County Board of Education, has known Guthrie professionally for decades. He said he knows Guthrie to be intelligent and hardworking. But he also noted that to get the best of Guthrie, one only needs to challenge him to a game of golf. Interestingly, Doolan also said that Guthrie’s first career aspiration was to be a stand-up comedian.

Barbara Guthrie said that her husband enjoys solitude and alone time when working to unload the stressors of life, i.e. work. She said that not many people know that he plays the guitar and he’s been teaching himself to play the banjo.

“He loves music,” Barbara said. “He likes to find time to play the guitar and banjo; it’s his way to unwind from a lot of the things going on.”

Managing a robust school system obviously comes with its share of challenges and stressors, but Guthrie said that not everything about the job is stressful. He said he enjoys connecting with the excellent teachers and staff members that are working in the schools every day – from teachers to aids to lunch workers to maintenance professionals. He said he also really likes the challenge of problem solving.

Guthrie was appointed to his first four-year term in 2010 and his second four-year term in 2014. Although he’s faced challenges never faced by another Carroll County Public School superintendent and is known across the state for being an advocate for a strong educational system, Guthrie said there are still things about the job that surprise him.

“I’m constantly amazed by the amount of misinformation circulating,” Guthrie said shaking his head. “We’ve expanded our social media channels, we cultivate good relationships with reporters and the media, we have cable channels, Board notes, emails to parents, a radio show – and still we have people who deliberately or unintentionally send out misinformation about what is happening in our school system.”

Guthrie said that the job of superintendent has changed in some ways. He said it’s become focused on budget and revenue and that dominates everything he does because any school improvement initiatives depend on the funding to support them. He said the need to ramp up security has also been a game-changer.

“I wouldn’t have dreamed that we’d see the number of school shootings across the country that we’ve seen in the last seven years,” Guthrie said. “It has affected how we run our schools. And it’s cost us money.”

But Guthrie also likes to look ahead, optimistic that the county can continue to find successes through the challenges. He said he really wants to add staff back into the system – to meet budget constraints; he has reduced the teaching staff in the county by 190 positions in the last five years. He said that while the county is still in compliance, he feels that programs like gifted and talented, career tech and special education are not being served as well as they should be due to staff size.

“I do regret not having the right resources to make improvements to the system,” Guthrie said. “The students are still progressing and I think they are well-served but my vision when I started this was that we’d make instructional improvements and be able to offer employees competitive salary increases. I wasn’t able to get to that point, we’ve done the best we could with what we’ve had.”

Guthrie said that he’s glad to have the newly formed Combined Education Committee – comprised of Board of Education members, County Commissioners, Carroll County Delegates and other citizens and members of the business community – working to solve this for the future.

According to Guthrie most superintendents serve two terms, some more. His current term lasts until 2018 and Guthrie said that he doesn’t know how long he’ll stay.

“I’m still learning every day,” Guthrie said. “I’m not perfect and I do make mistakes, but I also work tirelessly to make things better, as is true of most of the people working in this school system.”