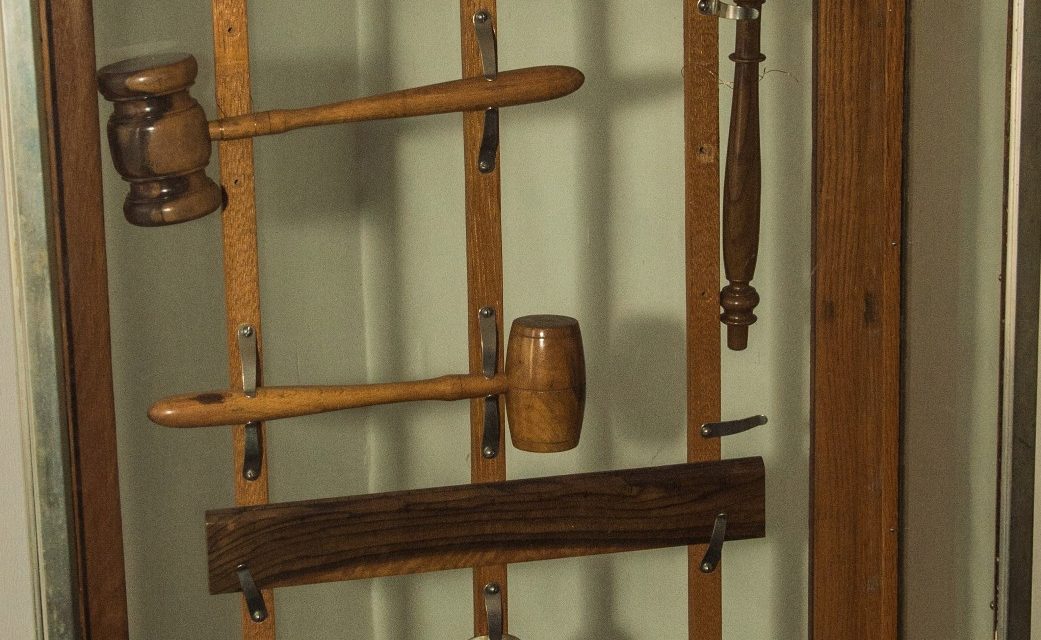 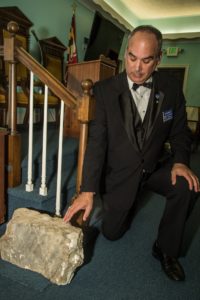 Jon Kelly, Worshipful Master, shows the lodge’s “rough ashler” which symbolizes how the goal of Masonry is to remove the roughness of a man and help work toward the smoothness of a “perfect ashler”.

When someone mentions Freemasons, do you imagine men hiding treasure behind historical puzzles? Freemasons are the largest and oldest fraternal organization in the world. For many people, their only exposure to the Masons is from the National Treasure movies.

While the Masons have rites they keep private, they are open to visitors for many other activities. Carroll County has hundreds of Freemasons who are members of the six lodges in the county. Many of them will be participating in public events this summer to commemorate the 300th anniversary of the formation of what is now known as the United Grand Lodge of England. It is from this lodge that American Freemasonry developed.

“We have big things planned for this summer with table lodges at different places around the area and other public events,” said Troy Clark, past Grandmaster for Door to Virtue, Lodge No. 46 in Westminster.

Clark said that the Door to Virtue Lodge became interested in celebrating the 300th Anniversary because “one of the three lodges that formed the Grand Lodge of England in 1717 was a lodge in Westminster. Since we are also located in Westminster, even though it’s not the same Westminster, we thought it would be a connection to use to celebrate this event.”

Steve Gemeny with the Door to Virtue Lodge has been putting the events together for the celebration. One of the key events will be a teleconference with the United Grand Lodge of England so that the lodges in Carroll County can take part in the overseas ceremonies.

“We are also planning for several lodges to meet individually and have a festive celebration of ancient masonry with table lodges,” Gemeny said.

This is initially a scripted event designed to resemble lodge meetings in the 1700s that often took place in taverns. It also includes a celebratory meal and is open to the public.

One of the events will be a Civil War reenactor’s group setting up a Masonic encampment as it might have appeared during the Civil War era.

A portion of the funds raised during these events will go to support the various Masonic charities. The goal of Masonry is to create a better person, and thereby, improve the world. According to the Masonic pamphlet, What’s A Mason?, “Masonry is deeply involved in helping people—it spends more than $2 million dollars every day in the United States, just to make life a little easier. And the great majority of that help goes to people who are not Masons.”

Much of it goes to charitable institutes and programs like Crippled Children’s Hospitals, Burns Institutes, and Childhood Language Disorder Clinics.

“Everything we do benefits someone and something,” said Mike Crafton with Plymouth Lodge No. 143 in Union Bridge.

He stated that one of the causes that his lodge often supported was the Maryland CHIPs Program. This is a Masonic program that helps identify and recover missing children. It helps parents put together an identification kit for children that includes a fingerprint card, a physical description, a video, computer disk, or DVD of the child, a dental imprint, and a DNA sample. Should a child go missing, the kit can be given to law enforcement agencies to help them find the child.

The Door to Virtue Lodge was the first lodge in Carroll County. It was chartered as the George Washington Lodge on November 4, 1811, by the Grand Lodge of Maryland, Ancient Free and Accepted Masons. The Masons met in a small brick building at Pipe Creek.

In 1860, 16 members of the Door to Virtue Lodge wanted to form a lodge closer to where they lived in Freedom, 14 miles away. At the time getting from Freedom to Westminster could take more than two hours. It took a while to find the ground and build a hall, but the Freedom Lodge organized on February 1, 1862, and the charter was granted on May 13.

Other lodges formed for the same reason. Lebanon Lodge in Manchester, formed in 1879, is one of these. The program for the 125th anniversary of the Lebanon Lodge noted this, saying, “There was a day in the early history of Lebanon Lodge when Brethren walked or rode horseback for miles to attend the meetings. They didn’t climb into high-powered cars and get there in a few minutes.”

Distance is not always the reason a new lodge forms. Monocacy Lodge No. 203 and Plymouth Lodge No. 143 share a building Crafton said. When the Monocacy Lodge sold its old building years ago, it was invited to share Plymouth’s Lodge.

Clark grew up in a Masonic family, so their teachings were part of his upbringing.

“My cousin was a Mason,” Clark said. “When I was a kid, I knew about Masons and how they worked.”

When he was old enough, he joined the Masons in 1992 and became a member of an ancient family.

While there is much fellowshipping among the Masons, there is also instruction. Masons learn various speeches, passwords, and signs to move through 33 different degrees.

Though generally believed to be a Christian group, Masons include many faiths. The one requirement is that Masons must believe in a higher being. Each lodge has a book of faith on its central altar.

Although the teachings are private matters for Masons, the public has occasionally been invited in to witness these meetings.