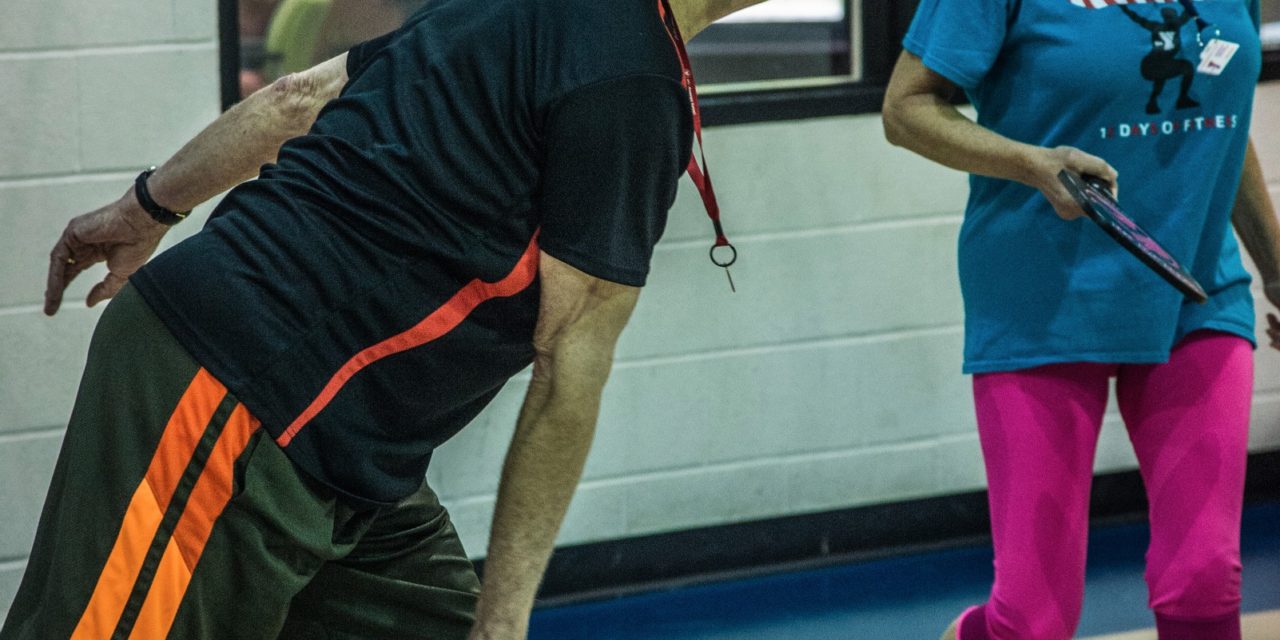 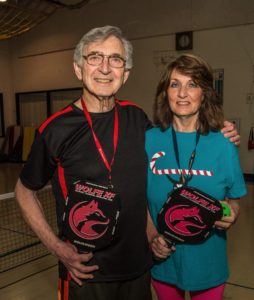 Gerry takes a shot while his partner and daughter, Cheryl Kroneberger, backs him up. Just about every morning Gerry and Cheryl are at the “Y” playing pickelball.

WHO: Gerard (Gerry) Borowy, 83, of Sykesville grew up in Baltimore and played the typical variety of baseball, basketball and touch football pick-up games in his youth. Like many men of his era, Borowy went to work right out of high school, then got drafted and spent 18 months in Korea. When he returned, he went back to his job at Baltimore Gas and Electric, earned his college degree at night on the GI Bill, and worked his way up through the company retiring as a buyer after 43 years. Borowy and his wife married young and raised five children enjoying almost 60 years of marriage before his wife died in 2013.

WHAT: After he retired, Borowy made a point of maintaining an active lifestyle. He tried a couple of gyms, but found his “home” at the Hill YMCA in Westminster and has been exercising and building friendships there regularly for the last 13 years.

“I am pretty fortunate,” Borowy said, “I get along pretty well for my age.”

His secret? Borowy keeps fit with a five-day-a-week workout schedule. On Mondays, Wednesdays, and Fridays, beginning at 6:45 a.m., he does his full workout including 20-30 minutes on a treadmill, 11 weight machines, and stretching exercises. On Tuesdays and Thursdays, he sleeps in, arriving at the YMCA around 7:00 a.m., when he does some light cardio and stretching exercises to limber up his legs.

From 8:00 until 10:00 a.m. every weekday morning, the YMCA converts their gym into a Pickleball court and that is where you find Gerry Borowy, Monday through Friday.

“When we started Pickleball,” explained Stacie Jones, a Membership Associate at the Hill YMCA, “Gerry was one of the first members who was willing to try it.”

“I like being active and I enjoy sports,” said Borowy, “so when the Y staff asked some of us to give Pickleball a try, I agreed and I kind of liked it.

While Borowy can tout the health benefits of Pickleball – it helps keeps him slim, sharpens his coordination, reflexes, balance, agility, and his speed – he also champions the mental challenges of playing the game and the great camaraderie among all the players.

“It is a great game for socializing,” explained Borowy. “We all just want to have fun together.”

WOW: Since learning the game, Borowy has become the Pickleball player recruiter at the YMCA.

“His energy is infectious and he always has a smile on his face,” said Jones.  “Gerry goes into the Fitness Center and he can talk almost anyone into playing Pickleball.”

“I always like to help the newcomers,” explained Borowy. “I give them the fundamentals, a few suggestions, and help them along the way.”

He tried to recruit Kathy Mayan, Director of Lifelong Learning at Carroll Community College and another early-morning exerciser at the Hill YMCA. But Mayan had another idea.

“I asked Gerry to teach a new Personal Enrichment class at the Community College – Introduction to Pickleball,” said Mayan.

Borowy remembered telling Mayan he was not qualified to teach anything. Mayan assured him that he was.

She knew that Borowy and his Pickleball doubles partner, Jim Hopkins, won the 80-84 year old age group at the Maryland Senior Olympics in July of 2016.

“He is the current Maryland Senior Olympic Champion; he won a gold medal last summer, so he knows the game,” explained Mayan. “Who better to teach Pickleball than the current gold medalist?”

Borowy’s Beginning Pickleball course ran for five sessions this spring; it was a full class taught by an instructor with infectious enthusiasm for the game.

Mayan joked that they have dubbed Gerry Borowy, “Professor Pickleball.”

Pickleball is a paddle sport created for all ages and skill levels. The rules are simple and the game is easy for beginners to learn, but can develop into a quick, fast-paced, competitive game for experienced players.