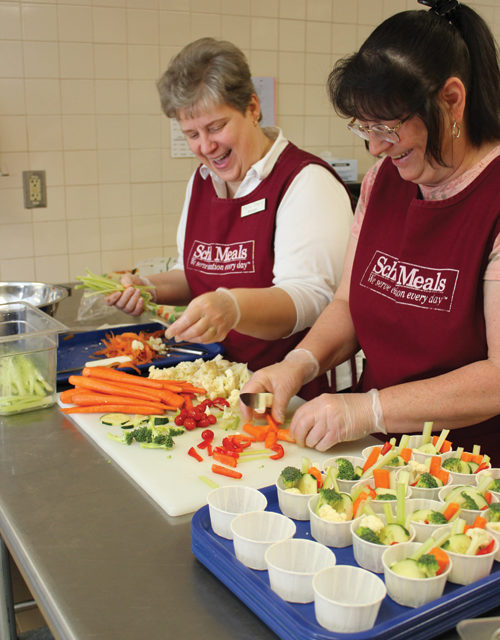 Shiloh Middle School food preparers Patty Therit and Vicky Lafferty prepare healthy veggies for the kids to add on to their meals.

Eldersburg pediatrician Dr. Cathy H. Reifman has heard thousands of those kinds of mealtime woes from parents in her 19 years of practice. She sees increasing numbers of children eating processed foods. She knows American society is suffused with high-fat, high-sodium, high-sugar, low-nutrition foods.

“Parents tell me all the time, ÔMy kid won’t eat that.’ But no child ever starved to death when ample food was around. Parents shouldn’t be short order cooks for their children,” said Dr. Reifman.

Parents who indulge their children’s demands for foods like deep-fried chicken nuggets and high-sugar juices with low nutritional value are cementing those tastes onto little palates, conditioning the children to want more of the same, she said.

Our sweet tooth starts in the womb, and we form food preferences early in life. If mom-to-be eats something sweet, baby gulps more amniotic fluid. Studies of infants show they like sweet and salty food, but scrunch up their faces in an “Ewwww!” expression to bitter and sour tastes. Bad news for mom and dad: if you’re overweight, your three to five-year-olds are more likely to have strong preferences for high-fat foods.

Carroll parents concerned about reports of poor nutrition and childhood obesity are steering their young children away from high-fat, high-sugar diets.

“Camden is a big fruit eater. We don’t really do junk food,” said Stephanie Copek. Vegetables are more of a challenge–Camden eats salad and green beans, “but nothing else,” she said.

Travis and Cari Spampinato of Eldersburg limit their three-year-old son Cody’s intake of fruit snacks and chips. “If I let him, he’d probably eat snacks all day long,” his mother said.

Breakfast for Cody and his sister, Emily, 4, is Fruity Pebbles or Eggos. Lunch can be peanut butter and jelly or grilled cheese sandwiches. Cody and Emily love steamed broccoli and dinner will include applesauce for Emily, who just has to have applesauce no matter what.

Jill Smith of Taneytown makes baby food for her son Owen, 2. He dines happily on vegetables such as pureed yams, squash, peas and lunch meats. Owen’s sister Samantha, 5, loves macaroni and cheese, green beans, pasta and chicken nuggets. When the children want a snack, Jill and her husband Dale offer a popsicle.

Parents complain to Dr. Michael Beardsley, a Mount Airy pediatrician, that their children want to live on junk food. His answer: “Don’t bring it into the house. Be the gatekeeper. “ If children will not eat a new vegetable the first time, try, try again, said Dr. Beardsley. “Sometimes just changing the appearance of food will make a difference,” he said, suggesting that plain broccoli may look unappetizing to a child, but adding cheese sauce can increase its appeal.

But don’t children get foods like chicken nuggets and cheese sticks in school lunches? Yes, but don’t tell the kids about food services’ secret ways to make those foods better for them.

Dietitian Eulalia Muschik, Carroll County Public Schools food services supervisor, balances what children like to eat and what is good for them as she plans breakfast for 1,500 and lunch for 9,000 to 10,000 students every day. Carroll students go through $2 million worth of food a year.

That means fruits instead of no-fiber fruit juices, “sweet muffins” made with sweet potatoes, and pizza that looks like it came from a carryout, but is made with white whole grain flour. Spaghetti is whole grain, canned vegetables are low-sodium. Chicken nuggets and cheese sticks are baked, not deep-fried.

To introduce new foods, said Muschik, “We take what they’re familiar with and put it with what they’re not.” Carrots would probably be rejected by children who did not know what they were, but kids will eat them mixed with dried beans and corn, a vegetable most children know and like .

“Sometimes elementary school students fear they won’t like a food and they won’t try it. Older students will buy it with their friends,” Therit said.

Carol Marvenko, weight-loss counselor at Physicians Weight Loss Center, Westminster, sees unhappy consequences of teaching children to clean their plates, over-salting food and using sweet treats to console themselves when they are hurt.

“When children are full, they should be able to stop. They’ll come back and eat again. What we tell people is, ÔDon’t eat too much at one time,’” Marvenko said.

Schools cannot do an instant fix for children’s diets, Muschik said. “We didn’t get here overnight. We’re not going to get back overnight.”