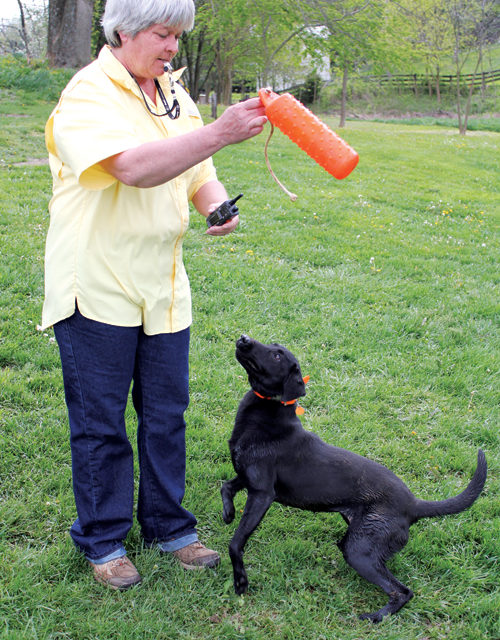 More research goes into the car people drive than the dog that’s going to share their life with them,” said dog trainer Linda Kaim, owner of Coeur d’ LionK9 Behavior Management, Westminster. “The first thing someone planning to acquire a dog should consider is not what kind of dog they would look good with, but what kind of dog they want to live with for the next 10 to 15 years.”

Sitting on a faded green canvas camp chair next to the farmhouse she shares with her husband, Peter Locaccio, Kaim said she has spent the last 40 years working with dogs and their owners. When owners experience problems with their dogs, their behavioral issues can often be traced back to the beginning days of the relationship.

As a child, Kaim had always wanted a dog, but her father was adamantly opposed to the idea, she said. Her father had once been attacked by a dog and feared them. Later, however, he relented, and allowed her to get a pure-bred Irish Setter, a show dog. By the age of 11, she started training dogs. Working with them became her lifelong passion.

Kaim has seen dog fads come and go. When the 1996 live action remake of the animated Disney movie, “101 Dalmatians,” starring Glenn Close as the villain, Cruella de Ville, hit the big screens, the public responded by buying cute, spotted puppies by the thousands, without considering the nature of the breed.

Often referred to as the Dalmatian Effect, Hollywood movies greatly impact the types of dogs being purchased by American families. What many families belatedly learned was that Dalmatians are extremely energetic dogs and often are not the best choice for a family with small children. Unfortunately, the lesson was often learned too late, and many Dalmatians ended up in animal shelters.

“Celebrities do not make good role models when it comes to deciding what kind of dog to get,” Kaim said. “We saw a lot of Dalmatians abandoned that year. They are not a good choice for a first time dog owner.”

Temperament and disposition are major considerations. Different breeds, whether purebred or mixed, have different temperaments, Kaim said. Does the dog’s temperament merge with the family’s dynamics – are there infants, young children, teens, only adults? Are there other pets in the household?

“Grooming needs should be high on the list of priorities for someone acquiring a dog,” Kaim said. “Is it going to require a lot of coat care? You might like the look of an Afghan, but are you willing to dedicate the six to 10 hours a week it’s going to take to maintain that dog’s coat.”

Will the dog be kept in an apartment or a house in suburbia, perhaps a farm or a mobile home? Kaim said a big dog may not be the best choice for someone living in an apartment; but any high energy dog, regardless of size, may not be appropriate for apartment living. No matter what type of dog a person owns, it requires regular exercise; some breeds require more than others, she said.

Animal behavioral specialist Debbie Winkler of Humane Domain, Sykesville, an animal training business that offers a wide range of services, said that there are different considerations involved when buying or adopting a dog. When buying a dog, particularly a puppy, the first thing that should be done is to meet the “parents” of the pooch. While both parents may not be on site, the mother of the pups should be, Winkler said.

When adopting a shelter dog, choose a shelter that conducts behavioral testing, Winkler said. The animal’s interaction with people, young and old, as well as cats, other dogs and other animals, should have been assessed and the results made available.

Inform the shelter adoption-counselor of your needs and life circumstances. Shelter staff are generally very knowledgeable about animals under their care, said Winkler, who is certified by the International Association of Animal Counselors, and the former vice president and president of the organization.

“I often steer people to a friendly, outgoing dog, rather than one sitting in the back of the run, frightened,” Winkler said. “Dogs that are fearful and defensive can make very good pets if they are adopted by adults who are aware of their limitations. The most important thing is to know your family and your needs: how much time do you have to spend with them? If you adopt a dog with behavioral problems, do you have time to work on those problems? Adoption should not be done impulsively. You are adding a member of your family.”

Dr. Nancy Powel, DVM,veterinarian and owner of Maryland Mobile Veterinarian Clinic, Westminster, said she grew up on a dairy farm and always loved working with animals. Early in her career, she worked with large animals, cows and horsesÉ But she now works with house pets. Being mobile allows her to do house calls, which enables her to observe the animals in a more comfortable environment, rather than in a clinic.

“Personality is important,” Powel said. “What is your purpose for having a dog: companionship? Most dogs want to be a part of the family.”

Size is another factor, Powel said. Every puppy is cute, she said, but think about what their size is going to be in a year.

Activity level is another key concern. A dog with a high energy level should be matched with an individual who also has a high activity level, she said. Certain breeds also have certain health care concerns, she said.

“Lifespan should be considered,” Powel said. “The general rule of thumb is the larger the dog, the shorter its lifespan. If you get a medium-sized dog, when your kids are young, it will probably be around to see your kids graduate from high school.”

Powel said that timing is also important to consider when bringing a new dog home. Holidays may be a good time to introduce the dog to the household because often people have time off from work. However, holidays can also be a time of added stress and frenzied activity, which could divert attention away from the new family member.

“Spring and summer are good seasons to bring home a pup,” Powel said. “It is harder to housebreak a dog in the winter, when it is cold outside. It is not much fun for either of you to have to go outside for the dog to do its business.”

There are some online resources on buying dogs. According to Nicky Ratliff, director of the Carroll County Humane Shelter, one is the American Humane Society website: www.humanesociety.org. Here are some other sites; with information on finding the right dog is www.petfinder.com; and dogtime.com/matchup.

The Right Dog
Nancy Williams, an animal behavioral specialist with Dogs with Issue, Westminster, offers these tips to consider when choosing the right dog.

Friendly A history of having good experiences with people is one the most important criteria, Williams said. The dog should be outgoing, not shy or fearful.

Confident “An animal that is confident is vital when selecting a dog for children,” Williams said. “Most aggressive threats toward people are based on an underlying fear of people. If you have many people, and possibly children, visit your home, your dog should be friendly.”

Exercise Most problems start with a lack of physical or mental activity for an animal, said Williams. Use exercise pens rather than cages or crates. Crates provide too little space for a young dog. A dog should not be kept in a crate for eight or more hours a day, she said. They need mental and physical exercise. Enroll the puppy or dog in a positive obedience or agility class at least once a year, she recommends.

Resources “Medical conditions and housing of your dog are potential issues,” she said. “Select a dog, when possible, from breeders who screen their dogs for health. Conditions such as joint pain and allergy problems can cost much time, effort and money for proper veterinary care. Insure that you will be able to manage the dog long-term: a yard, walks, pet-sitters, boarding needs and other expenses, should be considered.”

Social Situation “When there are children in the family, or you are planning to have children, or when there are other pets in the household, those are all factors. Changes in lifestyle can change the breed and type of dog that is selected,” Williams said. “Consider your changing lifestyle before you select a pet that will be with you 12-15 years or more.”

Bodie’s Story
Eight-year-old Bodie, a miniature poodle, was given a second chance when he was adopted by John and Marge Crosby of Finksburg.

“The little thing loves everybody,” John Crosby said. “We’re up in age, in our 70s, and about two years ago we adopted a puppy, which turned out to be a little too much for us.”

The Crosbys went to the Carroll County Humane Society intending to adopt an older dog. As soon as they met Bodie, they fell in love. Someone else had also expressed interest in the poodle, so the Crosbys told the staff that if Bodie was not adopted by the other interested party, they would take him.

“He is about 10 to 12 inches high and weighs about 13 pounds,” Crosby said. “Whoever had him before, trained him very well. The first night he whined a little, but when we let him get in bed with us, he went right to sleep. We were told he had slept in bed with his previous owners.”

Bodie is a perfect match for them, Crosby said. Although he and his wife have no physical infirmities, Crosby said, “we don’t get around as quickly as we used to.”

“He is so well-behaved and he’s a delight,” Crosby said. “My blood pressure has come down quite a bit since he came home with us.”

For more information on adopting an animal from the Carroll County Humane Society, visit www.carr.org/humane.