Home(s) for the Holidays 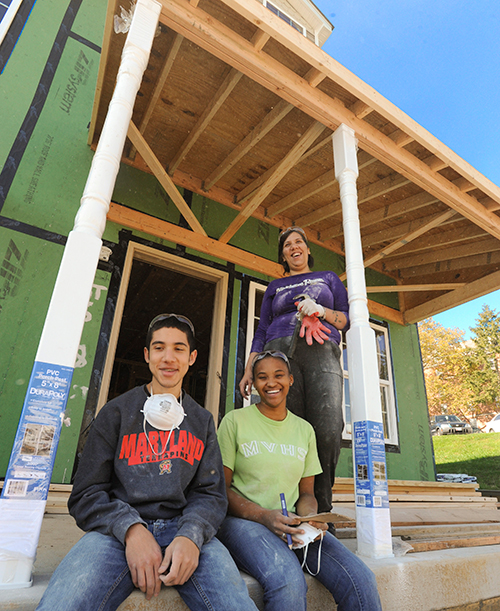 Jennifer DeJesus (standing) and two of her children, Chris, 16 and Karena, 18, stand outside their new home they’re helping construct in a Habitat for Humanity project in Westminster.

Countless volunteer hours have added up to sheer joy for several Carroll County residents this holiday season as they become homeowners for the first time, thanks to Habitat for Humanity of Carroll County.

Five families rose above limited incomes and poor housing conditions to partner with hundreds of Habitat volunteers, city and county agencies, and each other to complete the construction of five townhomes that the families will own.

Selected from a pool of the 32 applicants, these parents and their children became the reason for the season this year as everyone joined for a final push to complete Habitat’s most ambitious project in the county to date.

The parents and children are the reason Bryan Lyburn, executive director of Habitat for Humanity of Carroll County, rarely takes time off from raising funds and awareness about the project while remaining in contact with team leaders, board members, city officials and nonprofit agencies.

They were the reason volunteers Dan and Austin Jones toted boards and brush on a rainy Saturday for so long that the father and son were dubbed members of the Mucky Yucky Crew.

And knowing that the new homeowners would not only live near each other but would also become neighbors, who would borrow and lend sugar, share child care or meet on the back deck for a barbecue, made it worth the long hours for volunteer David Hall, who coordinated on-site volunteers every Wednesday and Saturday from 7:30 a.m. until 4 p.m. until the houses were complete.

As the months passed and family members joined volunteers to build the five townhomes from the mud up, the future homeowners shifted from being known as “an assistant manager at a local restaurant,” “a vet tech,” “a hospital employee,” “someone who works at the call center for Joseph A. Bank” to Lori Hryczaniuk, Christal Conaway, Sarah O’Neill, Jennifer DeJesus, and Lee and Crystal Caltrider.

“I really like to work with folks who may never have built anything before,” said Tingley, who joined church members to volunteer one Saturday. “I enjoy teaching them and giving them confidence.”

Tingley is a Habitat veteran. He has worked on sites in downtown Baltimore and journeyed to New Jersey and Biloxi, Miss., after hurricanes Sandy and Katrina.

“There is incredible reward in helping and looking back to see what has been done,” he said.

Lyburn calls Habitat for Humanity “a hand up, not a hand out.”

Before moving in, each partner family must put in 250 “sweat equity” hours, which are invested mostly at the construction site. Family members and their relatives also invest sweat equity by attending workshops about home maintenance, understanding mortgages, and navigating the closing and settlement process.

“I’ve learned a lot of things I didn’t know,” said Christal Conaway, who will move into one of the houses with her two children, Suraya, 10, and Jala, 3.

A Westminster native and a Westminster High School graduate, Conaway said it is impossible to describe the excitement of building a home that becomes her own.

“To be able to say that we did that. … It’s unbelievable.”

The three-story townhomes, tucked behind the corner market at Union Street and Pennsylvania Ave., are called Union Crossing. They have identical floor plans: three bedrooms, 1.5 baths, 1,635 square feet. Each home also has a back deck and an unfinished basement, which spans 640 square feet.

“The homes have a one-year workmanship warranty,” said Lyburn. “But the day-to-day maintenance, like changing the furnace filters, touching up the paint, will be up to the families.”

Families placed in Habitat homes are responsible for making mortgage payments to the organization until the house is paid off. The loan is interest-free.

“The houses are going to be wonderful. This is an incredible opportunity,” said Hryczaniuk. “My daughter, Faith, and I are so excited that we were selected. All the families involved are motivated to be good neighbors.”

“So many friends and family members have helped us,” she added. “And I couldn’t have earned my sweaty equity hours without my mother’s help watching Faith. It’s a challenge to balance the hours invested while working 40 hours a week. But it has been great to see something accomplished at the end of each day.”

“It’s exciting to see such beautiful houses that the people will be getting,” said

Habitat volunteer Chmidewski. “I enjoyed working with Lee and knowing he will receive the home. He is so excited; he gave me a tour of where his children’s rooms will be.”

The families already know one of their Union Street neighbors, Carol Kohlhepp.

In 2008, Kohlhepp invested 400 hours for her Habitat home, where she and her son, Levi, still reside.

“Every time I get up to make my coffee, I’m still as thrilled as the first day I moved in,” Kohlhepp said. “I can’t believe this home is mine. I’ve told my new neighbors that my door is always open to them. When I talk to them I get chills. When I talk to you about these homes, I get chills. God is here all the time.”