The Thrill of the Hunt. 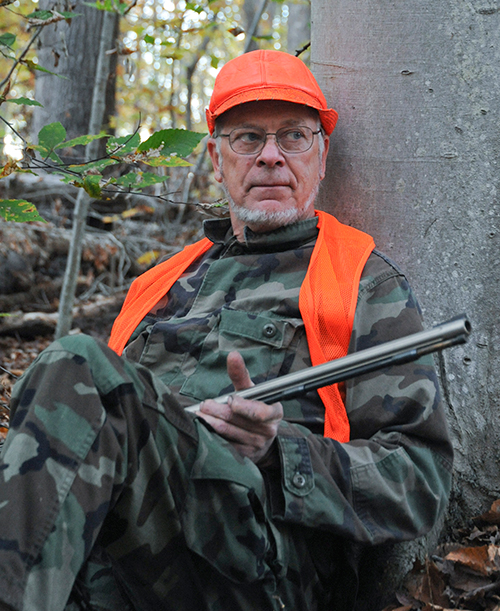 “I’ve lived here all my life. I’ve been hunting — probably 60 years. I was about 8 to 10 years old when I started. I hunt deer, elk, bear.”  Doug Devilbiss, Union Mills

Doug Devilbiss saw the deer. He quietly raised the black-powder muzzle-loading rifle to his shoulder, took careful aim and fired.

Devilbiss is one of thousands of avid game hunters in Carroll County. He loves the thrill and considers himself fortunate to have the opportunity to pursue the sport. In addition to the family farm where he was raised, Devilbiss owns other property where he is free to hunt.

But he and other sportsmen are worried that such opportunities are dwindling. Residential development, loss of farmland and a growing reluctance by landowners to allow hunting on their properties has greatly reduced hunting options in Carroll County, he said.

“It took three centuries to develop the first 650,000 acres in Maryland, it has only taken about 40 years to develop the next million acres of land,” Gov. Martin O’Malley noted in the report. “Since 1950, we’ve lost 873,000 acres of farmland — that’s more than twice the area of Baltimore County — and we’re projected to lose another 226,000 acres by 2035 if current trends continue.”

About 55.7 percent, or 160,180 acres, of Carroll County is agricultural land. About 3,000 acres of public wildlife management areas in 10 sections of the county are open to some form of hunting, according to the state Department of Natural Resources.

Several generations ago, pheasants, rabbits and other small game and fowl were plentiful in Carroll County; but now pheasants are all but nonexistent. Squirrel and deer are the two game animals Devilbiss routinely hunts.

“They really haven’t opened up to turkey hunting that much, and there are no pheasants. There are very few places where you can hunt rabbits anymore, either,” said Devilbiss, who runs an automotive repair business.

“Deer hunting [in Carroll] is excellent,” Devilbiss said. “I usually get a deer every year. I’ve hunted with black powder for years.”

One of the reasons is the range of various weapons. A high-powered rifle can fire a bullet up to five miles, Devilbiss said, while the ball of a muzzle-loader has a maximum range of about 500 yards. Arrows have an even shorter range.

In Carroll County, where so many houses dot the landscape, the use of a high-powered rifles is restricted to where they can be fired safely, Devilbiss said. The state of Maryland has established minimum-distance zones around buildings and homes.

Sgt. Robert Ford, supervisor of the state’s hunter education programs, said unlike states such as Pennsylvania, where the minimum hunting age is 12, Maryland does not have a minimum age for hunters.

To be certain of the regulations for specific Maryland counties, hunters should consult hunting regulations available on the Maryland Department Natural Resources website.

On average, 8,000 people enroll in traditional and Internet hunter education courses annually. Hunters must also participate and pass a six-hour field day workshop, where they handle firearms and fire live ammunition, in addition to learning and demonstrating their knowledge of safe hunting techniques.

Deer hunting with high-powered firearms ranks first in popularity, followed by archery and black-powder, he added. Hunting with a crossbow has also been added to the options open to hunters in Maryland.

During late summer and early fall, black-powder, archery and small-game hunting are the first seasons to open. The firearm deer hunting season begins Nov. 30, and runs through early January in Carroll and several other Maryland counties, according to the DNR.

“Deer, for a majority of hunters, is all they hunt,” Ford said. “There is a problem getting access to private lands, though. Waterfowl hunting is very big in Maryland, especially along the Eastern Shore and out West, where there is a different season for hunting resident Canadian geese before the migratory birds get there.”

Carroll County’s state game lands are open to hunting, but less and less private land offers such access. Also, Ford said, deer have learned to stay near developed areas during hunting season because the residential safety zone prohibits hunters from discharging high-powered firearms within 150 yards of a building.

Since the early 1970s, deer numbers have increased dramatically in areas with large residential populations, thanks to a lack of predators and restricted hunting access. This trend is apparent to any driver who has to slow down, stop or swerve to avoid colliding with deer on the county’s highways, Ford said.

West Virginia and Pennsylvania are the No. 1 and No. 2 states in terms of the number of deer collisions, according to a 2014 study by State Farm Insurance. Maryland ranks 17th nationally in the number of deer-vehicle crashes.

Brian Eyler, project leader for DNR’s Deer Project, said Carroll County is one of the top five Maryland counties in terms of deer harvest. The reason is the habitat, he said.

“Deer hunting is as popular there as any place in Maryland,” Eyler said. “Last year we harvested 5,915 deer in Carroll County. We get some nice size deer out of Carroll. In Maryland, we grow our biggest deer in the coastal plane.”

While the deer in Carroll don’t break size records, it isn’t unusual for hunters to bag animals weighing up to 150 pounds.

“We have some of the finest hunting in the state in Carroll,” Eyler said. “What some hunters may not know, we do have Sunday hunting in Carroll. Last year, hunters took 500 deer on Sundays.”

Westminster resident Dan Walsh said his family moved to Carroll County from Arbutus in 1970 when he was 13. He hunts in the county, he said, as well as in other areas.

“My dad passed away when I was about 9 years old,” he said. “We moved adjacent to a farm and I got permission to hunt. A friend of my dad’s instructed me in all the aspects of hunter safety.”

During his youth, Walsh would grab a shotgun off the wall of his home and head for the farm fields to hunt small game — mostly squirrel and rabbits. He continued to hunt through his teen years.

“As I got older, during my 18-to-20s, I lost touch with hunting for a while,” Walsh said. “But I never lost the desire. And then … I got very involved in deer hunting. I killed my first deer in the Finksburg area.”

In the mid-1980s, he became more involved in hunting. While on a hunting trip to Canada, he bagged his first bear.

Walsh said he regrets that a small percentage of people can tarnish the reputation for all hunters.

“The majority of hunters, around 95 percent, are very law-abiding, very environmentally conscious, and they really believe in the sport,” Walsh said. “Unfortunately, there are about 5 percent of hunters out there who hunt on private land without permission and disrespect the landowners’ properties.”

As a result, the confidence and respect landowners once had for hunters has deteriorated. To protect their families and their livestock, they often prohibit hunting entirely.

“Unfortunately, some people feel that they are above the law — that they don’t have to abide by the law,” said Walsh, who is also an avid fisherman. “Contrary to what a lot of people believe, the reasons we have such healthy game populations in not only Carroll County, but all over, is due to hunters, because of the revenue they generate, which is put back into public lands.”

Walsh said the biggest change in hunting in Carroll has been the loss of access to private lands, although parts of the Liberty watershed in Carroll County are open to archery, he added.

Both Devilbiss and Walsh eat the meat of the deer they take. Ford said that many hunters in Carroll County and throughout the state donate deer meat to Farmers and Hunters Feeding the Hungry.