On November 11: Honoring Another Kind of Veteran 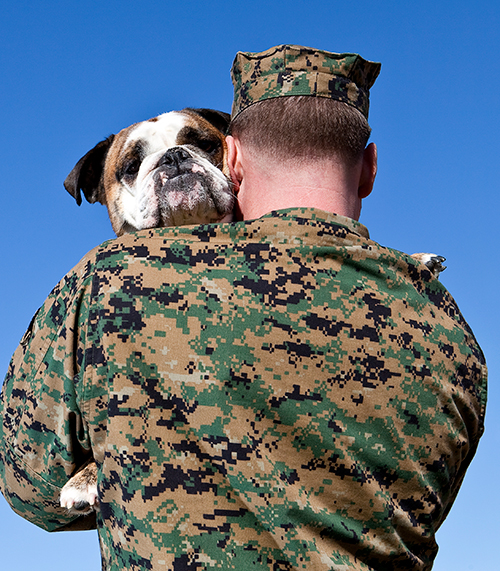 The ancient Egyptians, Persians, Greeks, Romans, Britons and many other cultures have employed war dogs to fulfill a variety of functions, from sentries to attack animals.

War dogs were first mentioned in accounts of a war between the armies of Alyattes, king of Lydia, in 600 BCE, against the Cimmerians, who lived in the Crimean peninsula along the Black Sea, in the area which is now known as the Ukraine.

Attila the Hun employed a large dog breed, known as Molossers, from Epirus (an area between present-day Greece and Albania), in his military campaigns, as did Frederick the Great and many others. The first recorded official use of war dogs in the U.S., took place during the Seminole Wars, in Florida, 1816-1858; and later, by both sides during the American Civil War.

During World War I, more than one million dogs served as messengers and in other war-related roles, said Ron Aiello, a Vietnam War veteran K-9 handler, and president of The United States War Dogs Association in Merrifield, Va. During the Vietnam War alone, it is estimated that U.S. war dogs were responsible for saving 10,000 lives. Aiello founded a nonprofit organization of former and current U.S. military dog handlers for the purpose of creating permanent War Dog Memorials and to educate the public about working military dogs.

“In 2000, we started the organization to establish a war dogs memorial in New Jersey – which was to be the first official state war dog memorial,” said Aiello. “Then 9/11 came along and that put the memorial on the back burner. Instead, we began sending care packages for military dogs and their handlers deployed to Iraq, and that became our main goal. It actually took us six years to come up with the money for the memorial. We still send care packages Iraq and Afghanistan to this day.”

The law, named after Robby, a military German shepherd, whose handler unsuccessfully tried to adopt him, rather than allowing him to be euthanized. The legislation requires that every effort possible must be made to find retirement homes for adoptable dogs, explained Collen McGee, public affairs officer for Lackland Air Force Base. Before the legislation, war dogs were either euthanized or abandoned when they became too old or disabled.

The birthplace of the military working dog training program, Lackland is also responsible for deciding whether or not the dogs are adoptable, and, if possible, rehabilitating and retraining them to make them adoptable.

“We have a large number of dogs that we adopt out ourselves,” McGee said. “They are not all retired, some of them may have washed out of training or were puppies from our breeding program which made better house pets than war dogs.”

Robby’s Law provided the Department of Defense with the formal process for the adoption of retired military working dogs, said McGee. U.S. Title 10, Chapter 153, regulates the order of preference for adoption: first preference is give to other military branches, federal agencies or law enforcement entities; second preference goes to former military dog handlers; and third is given to the general public, she said.

“Between 90 and 95 percent of our dogs are adopted by former handlers,” said McGee said. “We handle adoption arrangements for the entire country. We consider the needs of the dog first in order to find the best home possible.”

The late Joseph J. White of Florida, a former military dog handler who helped found the K-9 Corp in 1942, began pushing states and the federal government to honor war dogs with an official K-9 Veterans Day on March 13 every year.

Five or six states have officially adopted resolutions establishing K-9 Veterans Day, said Aiello. Although Maryland has not adopted a similar resolution, petitions have been submitted to the state house seeking a sponsor for the resolution. In Pennsylvania, for the past two years, the state Senate and House have issued proclamations declaring March 13 as K9 Veterans Day, said Kris Hopkins of the Working K9 Association of Central Pennsylvania.

Rather than have soldiers upset because they were forced to give up their dogs for adoption, an organization known as the Canine Corps was founded to provide foster homes for dogs owned by military personnel who are deployed overseas, said Vicky Warren of Charles County, who is the coordinator of the Canine Corps of Maryland. When Warren’s husband, Jim, served in the U.S. Marine Corps, Vicky had to face the possibility of giving up their dog.

It was that experience that led her to work with the Canine Corps. Over the past several years, the Warrens have provided foster homes for up to five or six dogs for as much as a year. Two dogs fostered by the Warrens are the pets of Air Force Tech Sgt. Tomeka Ray of Waldorf.

“I was deployed last year for a year in Afghanistan,” said Sgt. Ray. “The Warrens were great. One of my dogs got sick and they took it to the veterinarian. They even took them on a roadtrip to Florida. It was great.”

During the entire time she was deployed, the Warrens would chat with Sgt. Ray over Skype, once per week, to give her updates about how they were doing and so the dogs could hear her voice, she said. Sgt. Tomeka was so pleased by the service, she referred other military personnel who were being deployed and needed someone to care for their pets.

All of these unique programs recognize and honor the role dogs play in serving as companions for military personnel War dogs have long been honored by those who worked with them, and now, thanks to the efforts of Aiello and others, they are receiving national recognition.

On October 28, the John Burnam Monument Foundation will unveil a national war dogs memorial at Lackland Airforce Base, said Aiello. In 2000, Burnam, then 65, a former military dog handler, wrote the first of two books: Dog Tags of Courage; and in 2008, A Soldier’s Best Friend, which details his service with the Army’s 44th scout dog platoon in Vietnam from 1967 to 1968. Although his first dog, Timber, was injured in an ambush a few months after he began service, Burnam spent the remainder of his tour with a German shepherd named Clipper, who saved Burnam’s life and the lives of others by alerting them to ambushes, snipers and booby traps.

Veterans: Need a Ride to the VA?
If you are a veteran who needs transportation to either of the VA hospitals in Baltimore or the one at Ft. Detrick in Frederick, here is how to connect: Call the Carroll County Transportation Shuttle Service at 410-876-RIDE and register with the Carroll County Department of Social Services at 410-386-3485. Organized by County Commissioner Doug Howard and administered by the Carroll County Department of Social Services, the shuttle employs two minivans, leaving Monday through Friday from the Westminster TownMall at 8 a.m and the Carrolltown Mall in Eldersburg at 8:30 a.m.