Putting the Holler in Halloween 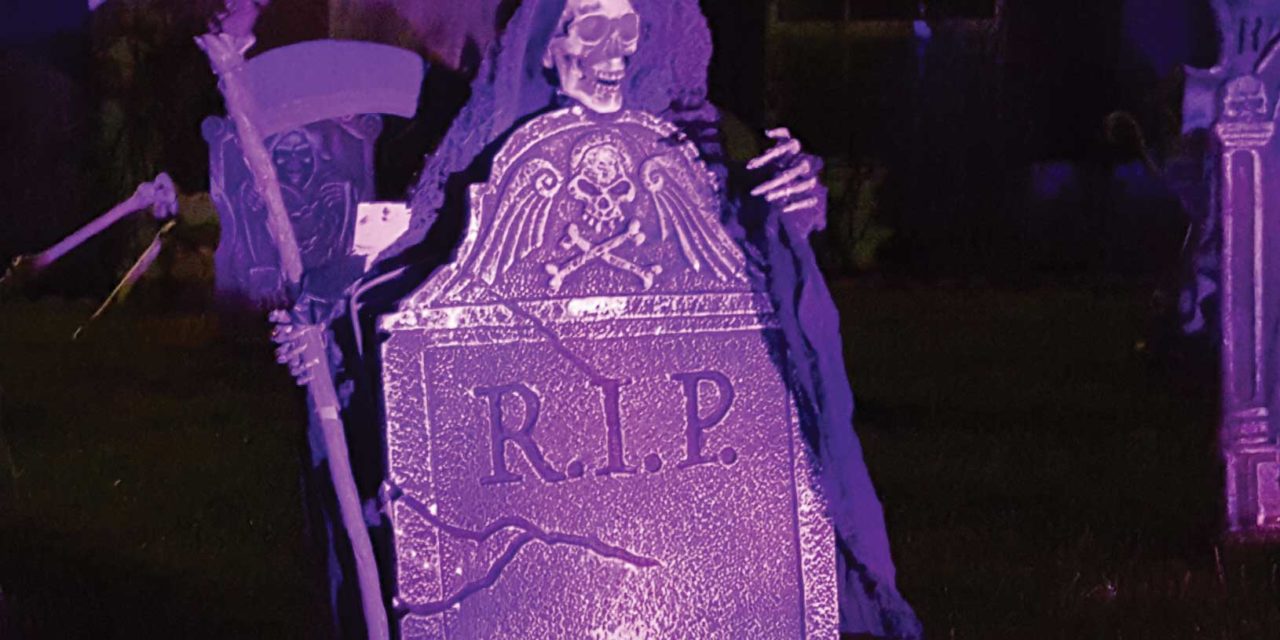 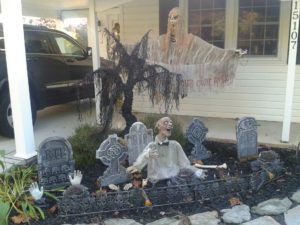 Pull up to the Vanderhoof home in Eldersburg, and you never know what you’ll find.

For the last three years, Ashleigh and Ben Vanderhoof have moved their cars and gutted their garage. Inside, visitors find an interactive haunted maze, made of black tarp, complete with fog machines, scary creatures and colored lights.

Last year, after a lighted path on the ground guided visitors through the maze. Inside, an axe murderer viciously chopped off her victim’s arm, which popped off and spewed blood. To the side was the victim’s intestine, covered in blood. At the end of the walkway, a hulking figure in all black with only his lighted eyes illuminated jumped out and scared the wits out of the visitors.

Little Red Riding Hood was all screams as the Big Bad Wolf attacked her. Through a hole in the tarp, a ghoul grabbed the visitor, and a bucket with scary hands ascended from below.

Usually, an adult mans the entrance to warn the youngest visitors.

Ashleigh traces her love for Halloween back to her childhood, when she watched horror movies with her father. Ben, too, has always preferred the spooky holiday.

“The two of us coming together is the perfect storm for Halloween,” Ashleigh says. “Halloween’s our thing. We love it.”

The pair is devoutly committed to Halloween as they demonstrated following their son’s birth four years ago. Induced on October 29, Ashleigh insisted on leaving the hospital the next day to be home in time to give candy to the neighborhood children on Halloween.

The Vanderhoofs have developed a reputation in the area for their haunted maze. Each year, it’s all in as far as setting up the creation a few weeks before Halloween with more than a dozen siblings and in-laws in joining in as actors as well. They employ technology throughout the maze with jumping spiders, dead bodies ascending from tombs, fake dolls spinning and, of course, blood spewing all over.

At the maze’s end, the reward is candy for the upwards of 100 who come through each year.

“A lot of people come through over and over,” she admits. “That’s what we live for.”

The Halloween fun doesn’t stop there for the Vanderhoofs. Each year, they host a big blowout in their unfinished basement. They admittedly spend “hundreds” for the food, decorations, candy and supplies. In 2015, the basement also was tarped and black lights provided the only illumination. They printed photos of all attendees but mangled their faces, added scars and stitches to create a “wall of horror.”

The inside décor proves just as much work as the outside, and they start as much as a month before the party, each of the last five years they have hosted. 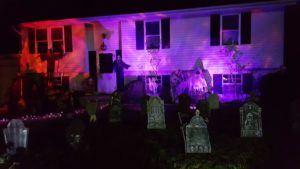 Westminster’s Joyce Anderson hosted her first Halloween party 10 years ago after her daughter Morgan missed the holiday over Outdoor School. The handmade décor featured an outdoor graveyard with fog, rats running up the walls, and the sounds of thunder and lightning. After the holiday, she bought more decorations for 50 percent off and began a collection that still grows. Last year, she added life-size skeletons and orange and purple fog lights.

The Andersons also go all out for their costumes. Each year, Joyce’s husband, Bobby Anderson, dresses up to frightfully distribute handfuls of candy to the neighborhood children. And each year, the entire family takes it one step further as they attend the Carroll Arts Center’s showing of the “Rocky Horror Picture Show” on Halloween night. Son Brady, 14, has won the costume contest the last two years as the transvestite and Rocky.

Regarding costumes, they are required for attendance at Karen Wilkinson’s annual Halloween shindig in Upperco. The Taneytown native and Westminster High School graduate works to make the party over the top each year. This means costumes, decorations and, of course, the menu.

For as long as she can remember, Wilkinson celebrated Halloween. Her birthday parties always had Halloween overtones. Her first costume? The Six Million Dollar Man with a nylon tie and plastic mask. Another year, she remembers dressing as a cowgirl.

Last year, the menu featured a layered taco dip with a spider web of sour cream and a carved jack-o’-lantern with guacamole foaming from the mouth. She served “worm dogs,” Crock Pot hot dogs cut lengthwise and served on hamburger rolls. She made candy corn Rice Krispie treats cut longwise and dipped in orange and yellow chocolate. Over the years, she’s also made “devilish eggs” with caper eyes and pepperoni goatees, pumpkin cheeseburgers with cheddar cheese and pepper stems and mozzarella eyeballs.

Her menu also includes clever beverages like Black Magic Zombies with green or orange sugar for the glass rim and Vampire Blood, Witches Brew, Ghost Tea and Warm Cider. Each year, the drink menu is featured in a picture frame for guests to view.

Wilkinson’s love of Halloween comes from her parents. Growing up, she lived on a five-acre lot surrounded by a cornfield. Her father cleared a path and took area children on a riding mower through the woods in a trailer filled with hay. In the woods, adults lurked, dressed as witches coming out of cauldrons, a mad scientist with someone lying on a table and a gorilla wandering around the forest.

Her decorations are traditionally just as thrilling. Her front yard usually features a flower bed with illuminated tombstones and zombies. Sometimes she includes a fog machine in the graveyard. In the front doorway, a grim reaper greets guests and a spinster flaps its wings at passersby.

Each year, Wilkinson begins the planning process in July. Her costume is always something dark and scary, whether a vampire, dark fairy or gothic ringmaster, to name a few.

“I’m a hairstylist so I’m creative,” she explains. “On Halloween, you can be as dark as you want, so nobody thinks you’re crazy. I’m generally conservative. Halloween is my outlet.”

Many wait all year for Halloween, just like children do for Christmas.

“If we had to give up decorating, we’d give up Christmas for Halloween,” Ashleigh Vanderhoof says.

Joyce Anderson echoes her sentiment. “Halloween to me is heads above Christmas,” she says, who loves the creativity employed with the fall holiday. “Halloween’s become a family event for us.”