A Twist on Your Average Coffee Shop 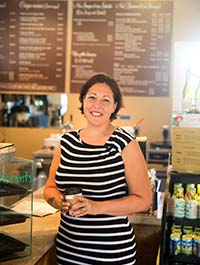 Hélène Taylor’s love of cooking grew from her grandmother and their life in Versailles. Her grandmother, Madeleine, paid special attention to detail, making sure each dish was prepared with perfection.

“The apples for the apple pie had to be cut in a certain way, every time,” Taylor explains.

Days in those kitchens also included other family members, such as uncles and cousins. Everyone played a role in preparing a meal. That sense of family still exists at the French Twist Café in Sykesville, which Taylor now owns.

The two-year-old establishment, which specializes in made-to-order crêpes and specialty coffee, has already become a staple in the community. In an instant, you can tell the quality and care that goes into every plate and mug by friendly and helpful staff members who really enjoy what they do. On any given day, they may create anywhere from 75 to 100 galettes and crêpes sucrées (savory and sweet crêpes, respectively).

So how did Taylor manage to create this culture and community interest so quickly? While it may seem like an overnight success to some, carving her path started many years ago. 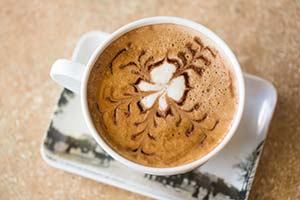 After learning how to cook in her grandmother’s kitchen, Taylor decided to pursue her interest of living abroad during her college years, and applied to be an au pair in the U.S. She spent some time in California initially, later meeting her husband at a friend’s wedding. After having their first child, they decided to move to the mid-Atlantic, since he is originally from Havre de Grace, Maryland.

About a decade later, now living in Sykesville, Taylor’s father came to visit from France. After he spent the morning walking around town, not being able to find a place to sit and have a coffee, they realized this missing community element. Quoting her father, Taylor says, “Every town should have bar, coffee shop, and church.”

The idea to open the French Twist was also due to her reflection on the sudden and unexpected passing of her mother, Jeannine, which had happened prior to her father’s visit. The confluence of these events is what prompted Taylor to believe the café was something she could do not only for the community, but also as a tribute to her mother’s legacy.

To make sure she could be as prepared as possible for this venture, she immersed herself in small business classes at a community college, and spent a week at the American Barista & Coffee School in Portland, Oregon. 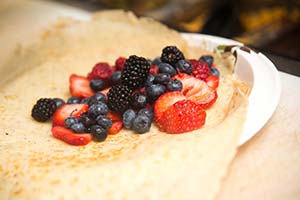 Aside from learning the trade, she spent hours pouring over plans for the building and making sure that the construction was going the way it should. She even entered the inaugural Carroll Biz Challenge and received some valuable feedback. The training, effort, and dedication paid off, as Taylor finally saw her dream become a reality on April 1st, 2014.

But instead of the hard work being over, it was just beginning. Over the following weeks, the new business owner was regularly running out of eggs and milk due to the café’s early success. “There were times where at midnight I’d go to the grocery store and buy over 12 gallons of milk for the next day.”

For the first six months she was there every day to make sure the operation ran smoothly, even putting in about 130 hours in its first week. All of this took its toll though, mostly due to the fact that she didn’t see her children.

Taylor, now a mother of four, has made some adjustments where she makes sure she takes time on Sunday mornings for church service and Monday afternoon for her family. 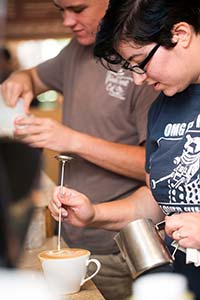 Why has the café been such as success? Two reasons: first is the food and beverage, and second is the community feel. Just by reading the French Twist’s tagline, “Coffee, Crêpes, and Conversation” you get a sense of the focus on the product and on customer experience, and how the two merge.

First, Taylor wants to educate not only her employees, but her customers as well. The French Twist offers specialty coffee, which is coffee that is specific to a given climate and location. “We do a lot of research with the coffee farmers and roasters. The coffee is micro-roasted, stored properly, and then cooled and sent to a coffee shop to brew several different ways,” Taylor explains. “I like to show how you can take the same coffee and get three different tastes by using three different brewing methods. And methods people can reproduce at home.”

While latte and mocha selections may be their most popular, Taylor chooses something different. So which coffee does she enjoy the most? “Right now, Misuku, an African coffee, is my favorite.”

In terms of the menu, it’s not large, yet has a taste for everyone. Customers are able to see their crêpes being prepared by hand in the open kitchen, on one of five griddles. (One is even reserved for gluten free options only, and located in a separate section to avoid contamination.)

If you’re into traditional breakfast fare, the Canadian – their most popular crêpe – with egg, crispy bacon, cheddar, and maple syrup, may be perfect for you. If you enjoy something more sweet, try their fresh berries and whipped cream crêpe. 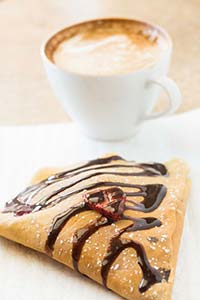 Aside from coffee and crêpes, they offer soups, salads, treats, wine and beer. Also available are imported sweet and savory snacks from France, including caramels and crêpe dentelle, and even t-shirts, candles, mugs.

Although the great food and coffee, along with the genuine sense of community make the French Twist’s success apparent, one question still remained: Why Sykesville?

Taylor says she wanted to be in a small town, and be part of a community where you all know each other. “All of the merchants in this area all get along. We meet for coffee and discuss how to make the downtown nicer and better.”

While she is proud of her family and how she was able to negotiate and navigate some of her business achievements, what brings her the most joy is serving those that walk through her door.

“How people enjoy their crêpes and have a great experience here is what brings me the most happiness,” she says.

It’s not hard to see that just like one of Taylor’s crêpes along with a freshly brewed coffee, it appears the French Twist Café and the Sykesville community are a perfect combination.