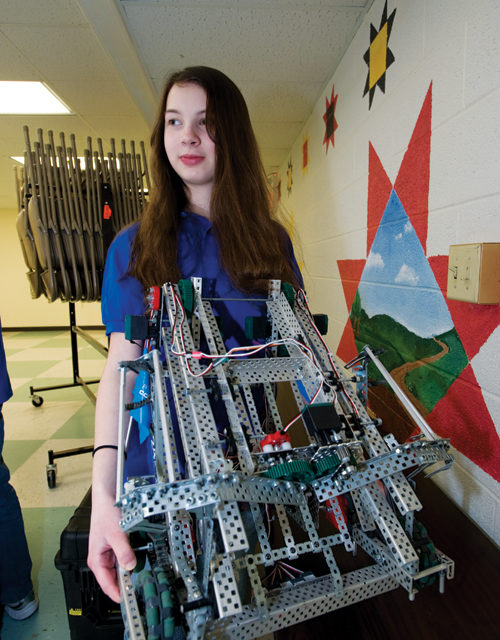 Hannah Kiesel is ready for the world competition in Orlando.

“The Beast” had its work cut out for it.

On an early Spring Saturday morning at the Carroll County Ag Center, Robot A, aka The Beast, looking like an Erector set device come to life, was not resting on its laurels as recent victor at the Mid-Atlantic VEX Championships, held in Westminster in March.

In the bustling makeshift lab at the Ag Center, The Beast was challenged by other “Beasts” built by several teenage robotmasters who, tools in hand and laptops at the ready, were tweaking their protges for an even bigger brawl.

Under their control, the Beast and another robotic contrivance dashed around a ring, brightly colored wheels spinning, tirelessly picking up plastic rings, each attempting to best the other in frenetic skirmish.

The Beast’s creators, the Super Sonic Sparks, are not mad scientists but young members of a Carroll County 4 – H club.

The students, ranging in age from 12 to 18, build robots and design computer programs to operate them.

Recently, representatives from the Sparks competed for the third time in a VEX Robotics Competition World Championship, held this year in Orlando. Florida, and proved themselves a force to be reckoned with, returning with awards for teamwork and overall excellence.

“With the awards they won, they are one of the top teams out of the several thousand Vex Robotics teams around the world,” said Dave Franc, an electronics engineer and father of Sparks members Kathryn and Danielle Franc. He has been the Sparks’ coach since the team’s inception in 2007. He explained how the competitions are sponsored:

“VEX makes direct contributions to larger events like the Mid-Atlantic Championship. VEX typically does not sponsor teams directly, but they sponsor our team because we assisted them on a very large community service project last fall.” The Sparks are also sponsored by local businesses and organizations.

During a tournament like the VEX championships, face-offs can get intense. Teams alternate between working remote controls and bursts of feverish activity, during which sparks can literally fly when a robot needs an emergency repair.

Team member Kathryn Franc said that she has found her niche in building and design. The process inspires something like awe in the 18-year-old.

“It’s like you come up with an idea that seems impossible,” she said, “but there’s usually a way to make it work.”

Joining the Sparks was a natural move for 15-year-old robotics enthusiast Logan Hardesty “I’ve always been fascinated by how you can think of something, build it,” he said, “and it actually works.”

Fifteen-year-old Jordan Kiesel’s robotics career started early with LEGOs robot-building kits. “I thought it was really cool to build them,” he said, “and have them do whatever I wanted.”

“I decided I wanted to be in the programming aspect of robotics competition,” Jordan said, explaining that he enjoys working on plans and seeing his ideas brought to life by the team.

For Danielle Franc, 15, the competitions, which get the Sparks out of the “lab,” are the best part. “I love the energy and meeting different people,” he said.

“I love the competitions,” said Kathryn Franc. “We’ve met people from all over the world…”

“The kids have to present themselves very professionally to the judges,” she said. She points out that the students also learn to work as a team and under pressure. “Sometimes they literally have like five minutes to take something apart and fix it between rounds.”

But competitions aren’t the only destinations when the Super Sonic Sparks take their robots on the road.

“We take robots to the 4-H Fair, the Fall Fest, the Maryland State Fair,” said Kathryn Franc. “When we do outreach activities we let the public drive the robots, so it’s really fun.”

Additionally, the Sparks put their computer and building skills to good use outside of the field of robotics.

“We’ve refurbished computers for families who need them,” said Kathryn. “We also made recycling boxes for the fair grounds.”

Coach Dave Franc is impressed with the Super Sonic Sparks and their accomplishments, both with robots and within the community.

“Our team is made up of some truly spectacular, talented youth who give a lot to the local community,” he said. “Carroll County should be very proud of them.”