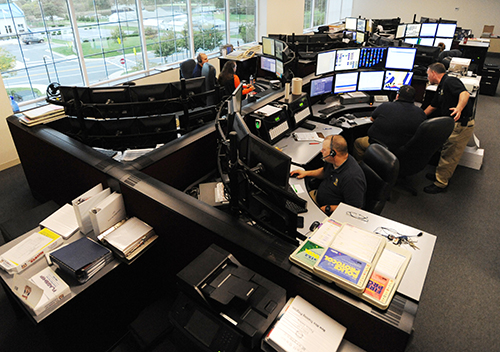 There is a consistent hum of radio noise in the large room that houses 10 dispatch stations at Carroll County’s 911 center near New Windsor.
Call codes, license plate numbers, fire companies reporting back from dispatched locations — constant voices roll into that consistent hum.

“…no need for EMS out there, right?” “…Negative, everything fine here..”

During the occasional lull, dispatchers carry on casual conversation and cling to the few minutes that allow them to watch the news or a football game on one of the televisions that hang in the area.

Those minutes are few.

Carroll County’s 911 center answers about 70,000 calls a year and more than 100,000 calls coming into regular 10-digit lines, according to Randy Waesche, the center’s coordinator. The center dispatches more than 19,000 fire and ambulance calls and more than 60,000 police calls.

The people who answer those frantic calls know that they are the callers’ lifeline. As dispatchers, they have a unique blend of calm and sensitivity, compassion and confidence.

Jon Carl leaves his Taneytown home each day for work, knowing that tragedy will strike. There will be fires, people will be injured, crimes will be committed and, when Carroll County residents call for help, he will answer.

Carl is a shift supervisor and one of 37 dispatchers, 30 of whom are full time, at the 911 center.

He said volunteering at the Taneytown Volunteer Fire Department as an EMS provider gave him the opportunity to become a 911 dispatcher. The 32-year-old has been a dispatcher in Carroll County for 12 years.

“I like helping people, which sounds cliché, but it’s the truth,” Carl said. “I always wanted to be a firefighter but I have asthma, so I can’t. That’s how I became an EMS, which opened the door [to the 911 center job].”

In 2014, Carroll’s 911 center operated with a $2.6 million budget, according to Waesche, 40 percent of which came from a 75-cent monthly fee on phone bills. The remaining 60 percent, $1.56 million, comes from the Carroll County government general fund.

Waesche, who started his career as a dispatcher in Frederick County in 1974, said that like many jobs, being a 911 dispatcher has its perks and its pitfalls. Being isolated from the emergencies dispatchers are helping people through can be difficult, he said.

“It’s different than being in the field because while we can give advice and guide callers, we can’t get our hands in there to actually be of assistance,” he said. “We’re very involved in the emergency but not able to personally intervene. Our work has to be done through the person we’re trying to assist.”

On this day, Kim Jones, a 50-year-old dispatcher who has worked in Carroll County for seven years, is managing the police dispatch radios.

She dispatches officers to locations around the county and tracks who is where, knowing which officers are on calls and which are available to respond to calls. She assists officers in the field by running license plate numbers or tracking down other information an officer needs.

Jones, who came to Carroll County with 19 years of experience as a dispatcher in Baltimore County, said that she sometimes worries about the police officers she is dispatching, knowing they may be entering dangerous situations.

“You never want [police] officers or firefighters to be in any danger,” Jones said while checking one of her eight computer screens to locate the on-duty officers. “I know it goes with the job and they are paid for that, but you always worry about them because we can’t see what is going on out there.”

“I don’t always like being here on a holiday because of my family, but it’s part of the job,” Carl said as he looked over the shoulder of a dispatcher he’s training. “There needs to be seven people here. With that said, you learn to make your holidays on different days.”

Dispatchers joke that they can sometimes predict call volumes based on events. For example, they said during the early part of a Ravens game phones might be quieter, but closer to the end of a game and into the hours following, call volume might pick up.

Recently hired as a dispatcher in Carroll County, Ashley Crooks, 27, brings four years of experience from the 911 center in Baltimore County. The call processing is pretty much the same she said, but added with a grin that the call volume is not.

In order to be successful at this job, Crooks said dispatchers have to be able to react to any kind of situation.

Jones added that over the years she has gained a greater ability to keep her head about her during stressful calls.

“I don’t get stressed like I used just, because I’ve been doing this for so long,” Jones said as she clicked between two computer screens and read a piece of information to an officer over the radio. “I’m sure I haven’t heard everything, but you do hear a lot and you build up a tolerance.”

Despite years of experience and training, little can completely prepare 911 dispatchers for the stress that comes with serving as a lifeline for someone in the midst of a tragic, chaotic, often life-altering emergency.

Corey Milewski, 19, of Hampstead has been a Carroll County 911 dispatcher since the spring. He is a volunteer with the Hampstead Volunteer Fire Company and said he hopes one day to work as a career firefighter.

Several months ago Milewski took a call, and on the other end of the line was a father whose young daughter had committed suicide. Corey said all he could do was stay on the line with the father until he was sure the paramedics had arrived at the home.

Carl said he was once on the phone with a person who was choking. The caller died before the paramedics arrived. Another time he took a call from a parent whose infant had died.

“There have been quite a few people in the last 13 years that I know I was the last person they talked to,” Carl said. “That, I think, is why some people might not be cut out for the job.”

Waesche said another challenging part of the job is ending a call and not knowing the outcome of the situation.

“Most of the time we don’t know what happens after the person is transported, after the police arrive,” Waesche said. “There is no sense of closure really.”

Crooks said even on the tough calls that she can focus on helping the caller because she reminds herself that “this is not my emergency — this is not happening to me.”

Not all calls coming in involve life-or-death situations. Carl said they still get calls for cats in trees and complaints of barking dogs at the neighbor’s house. There are also “regulars” who call time and again — often senior citizens who seem lonely more than anything else. And, because the 911 lines are actually attached to a 10-digit phone number, they sometimes get a telemarketer on the line trying to sell something.

Crooks joked that people think 911 dispatchers are like the OnStar commercials. She said people get frustrated when she asks a series of questions, even though the answers to those questions will help her understand how to best help the caller.

“We have to ask a series of questions to pinpoint a location and to figure out what the situation is and what response is needed,” Crooks said. “People want to call and say ‘I’m hurt’ and we’ll say, ‘OK, we’ll be right there.’”

Carl said he actually had an elderly man cuss him out and hang up on him because he was “asking too many questions.”

“People seem annoyed sometimes by the questions,” he said. “What would be more annoying is if a police officer showed up at their house when what they really need is an ambulance. We understand that people just want help to arrive — they don’t want to be on the phone answering questions.”

Crooks added that Carroll County has a lot of rural areas, which means it can take longer for emergency vehicles to show up at the scene, sometimes adding to the caller’s frustration. The 911 center is outfitted with a mapping tool that helps the dispatcher locate where a call is coming from. It’s very effective for landlines but less so with cellphones, which forces the dispatcher to ask more questions in an effort to locate the caller.

“Everyone here pretty much understands and knows we’re just the voice on the other end of the phone,” Carl said. “We understand people are really stressed when they call us. We have to be able to take mental abuse every day and move on. It’s the nature of the business. It’s what we get paid for.”

Milewski added with a chuckle that it would also be great if people could avoid butt-dialing 911.

911 Training at a glance
State regulations dictate the 911 dispatcher training regimen. Dispatchers earn certifications in areas such as basic communicator training (in order to manage the radio systems) and fielding fire, medical and police calls.

Generally, the best people for the dispatcher positions are those who come from a fire service or police background.

“They are not required to, but generally the candidates we hire do have some type of emergency services background,” said Randy Waesche, the county’s 911 center coordinator. “It helps them handle the emergencies and stress of the job if they have some kind of hands-on field experience.”

Carroll County 911 dispatchers are county employees. The starting salary is just over $35,000, which, according to Waesche, is competitive with other counties in Maryland.