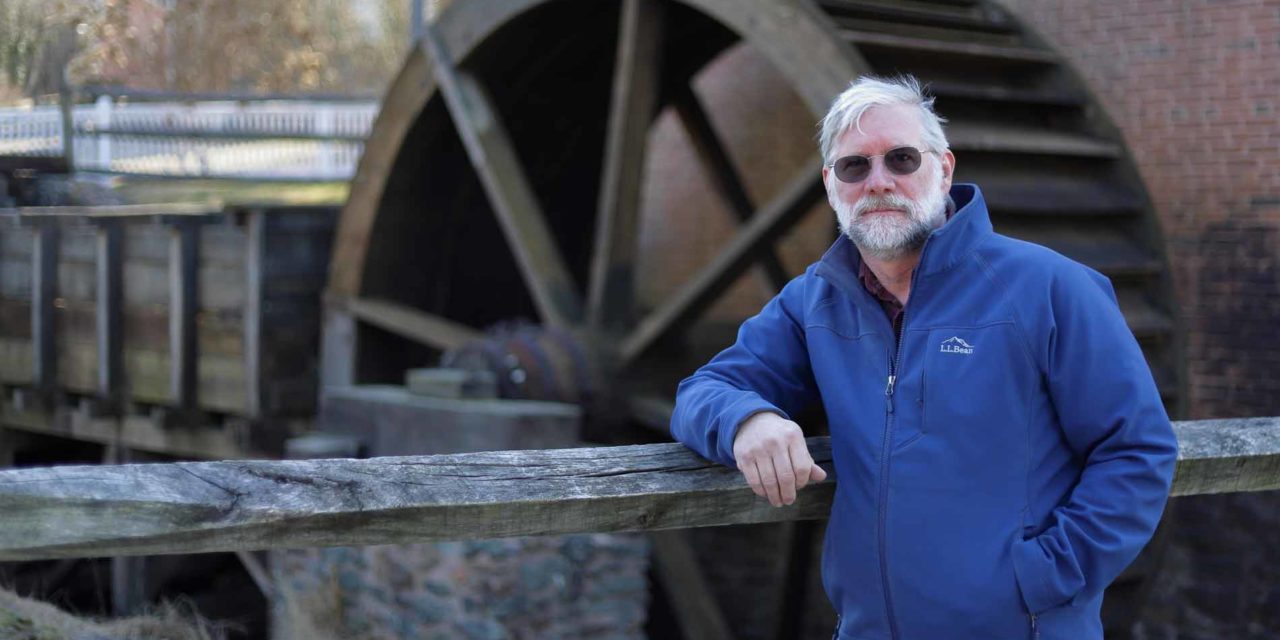 John Boag can tell you that it takes more than just a flip of a switch to run a 223-year-old mill. But truth be told, he’d rather show you. 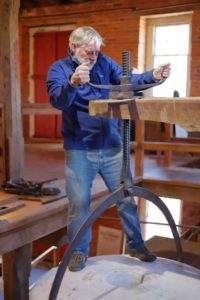 Boag, who is returning to his former position as miller at Union Mills Homestead, will be on site starting May 1 to show visitors how brothers Andrew and David Shriver used a water-powered mill in 1797 to grind grain into flour to be sold locally and abroad. Boag’s daily tasks will reflect the work of the Shrivers and include checking cogs, opening head gates, adjusting water flow, dressing stones, and watching the grind.

If all that sounds complicated, Boag acknowledges it is.

“Learning a historic trade takes years of hands-on experience,” Boag says. “You can look at it, read about it, study it, but you still have to work with somebody hands-on to learn it.”

During college, Boag spent summers working at the historic Colvin Run Mill in Great Falls, Va. By the time he graduated from Lebanon Valley College in 1980 with a degree in history, he had decided to focus on interpretive, or living, history rather than teaching history in a classroom. He spent two years after graduation as a miller’s apprentice at Colvin Run Mill. In 1982, he was hired by the Union Mills Homestead Foundation to be their first miller and helped during the $260,000 restoration of the mill to install the gears and build the waterwheel. In 1985 he left to take a job as a wheelwright at Colonial Williamsburg in Virginia.

Boag spent the next 35 years working as a costumed wheelwright and master of the shop at Colonial Williamsburg. He did demonstrations for visitors, hired and trained apprentices, scheduled tasks, and collaborated with with other museums on projects, all while working with his staff to build and repair carriages, carts, wagons and wheelbarrows.

“Here at the mill, I can use what I learned at Colonial Williamsburg,” Boag says. “I have not only 35 years of woodworking experience with hand tools, but also the interpretive and public programming aspects that I gained [in Williamsburg].”

Boag’s responsibilities at the mill will range from giving tours that interpret the history of the mill and the surrounding area to running the mill to using his woodworking skills to make repairs to the millworks. 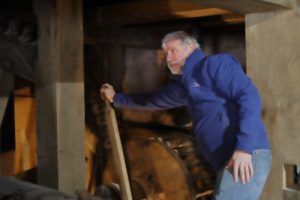 It’s a big job for a big mill, notes Jim Shriver, the great-great-great-grandson of Andrew Shriver and the current treasurer at the Union Mills Homestead Foundation. The restored mill operates with seven paid employees, a full slate of volunteers, a 48-bucket waterwheel that stands 15.5 feet tall and is 6 feet wide, dozens of gears made from white oak and ironwood, three sets of millstones that weigh about 2,500 pounds each, and a half-mile-long mill race to divert and return water to Big Pipe Creek. 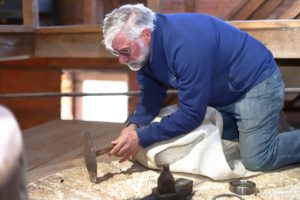 “What you see when you visit the mill is a lot of moving parts,” says Shriver. “It’s very complex for being what we refer to as a ‘simple machine.’ Not just anyone can run it. A miller has to be sharp — skilled and knowledgeable and trained — but also attuned to everything going on around him.”

Once Boag has the mill ready for production, he will be grinding sacks of grains — corn, wheat, buckwheat and rye — that he’ll source locally. According to Shriver, one sack of grain makes just shy of one sack of flour after it’s sifted, and it takes a couple minutes to grind. The flour will be packaged and sold to the public at the mill. By comparison, Shriver notes, in 1797 the mill was processing wagonloads of grain, and when fully operational, it could easily grind 300 pounds of grain into flour in an hour and pack it in wooden barrels.

“Basically, it was a big factory, referred to as an ‘automated mill’ and invented by Oliver Evans,” Boag says. “His design allowed one person to turn on the water to the wheel, which would then run three or more stones, elevators, sifting machines and barrel packers — all working simultaneously.”

Evans, who was born in Delaware in 1755, filed a patent for his automated mill in 1790. About that time, Shriver notes, flour production and export in Maryland brought an economic boom to the area. The port of Baltimore expanded to welcome ships that took flour to Europe and other destinations, and dirt roads like the one that went past the mill property (now Route 97) became heavily traveled turnpikes.

The mill was in continuous operation from 1797 to 1942. It evolved with the times, adopting electricity, rollers and turbines. By 1942, the flour industry was winding down in Carroll County, and the Shriver family sold the turbines as scrap metal for the war effort. 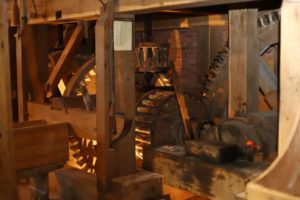 The mill then sat idle until the 1950s, when Frederic Shriver Klein and his brothers Richard and Philip opened it as a museum. In 1964, the Klein brothers established the Union Mills Homestead Foundation. Union Mills Homestead was added to the National Register of Historic Places in 1971.
Long-term plans to bring the mill back to its original state started in 1972 when the foundation gifted the property and its structures to Carroll County. The next year, the foundation received a grant from the U.S. Department of Housing and Urban Development to stabilize the mill. The full restoration of the waterwheel and the inner workings was completed in 1983 by Derek Ogden with grants from the state of Maryland and Carroll County. The project was named Best Restoration Project by the American Association for State and Local History.

Jane Sewell, executive director of the Union Mills Homestead Foundation and also a descendent of the Shriver family, sees two more projects in the mill’s near future: replacement of the flume (the structure that carries water to the wheel), for which the foundation has received an $80,000 grant from the Maryland Historic Trust, and replacement of the waterwheel.

“We expect the flume will be replaced sometime this year,” Sewell says. “It has some leaks that John will need to patch, but that’s not unlike what a miller would have done in 1797. The wheel and the shaft have also suffered from exposure to the elements and will need to be replaced in the next five years.”

As the restorations bring the mill closer and closer to its original standing as a prime example of a working Oliver Evans mill from 1797, Boag also hopes to link the mill solidly to the future.
“Producing a viable product can put a historic site on a different level,” Boag says. “It allows us to talk not only about the historic products while producing them, but also about the technology and connections to modern concerns, such as alternative power options.”

Look Forward to Days Past

Union Mills Homestead includes a 16-acre, dog-friendly park where visitors can picnic, enjoy the gardens, and walk along the mill race. You’ll need a ticket to visit the mill and the house, but the blacksmith shop, cooper shop, tannery and miller’s house are all open to the public.